This week is Cornflakes Week, a festival of fun that is exclusively OpenSim. Only a handful of grids are  participating this year (we were up to 11 grids back in 2017) but maybe Cornflakes 2023 can prove to be BIG for original OpenSim silliness, if the world doesn't end up a cinder before then,

The idea of Cornflakes Week? It's not morbidly focused on one late lamented person. Goodness knows, so many dear companions, fine artists, and generous friends have left this virtual life and we miss them all. No, the idea of the week is that it's an open ended festival, in the sense that you can have your own home grown Corny party, it can be adapted to the style of any grid or region, it's not affiliated with the weather or time of day, or the local religious, cultural, social, or political goings on of any one corner of the planet. What the world needs now is more gentle silliness, more than ever, and Cornflakes Week is all about that in a uniquely OpenSim way.

Just to show that the concept can be modded, brought forward from the aughts to the twenties, and from pure prim to magnificent mesh, Cherry Manga took a journey through the creations of Cornflakes and came up with her own take on gentle fun. The build is still visitable in the sky above our clubhouse on OSgrid, and guitarman Whirli Placebo agreed to sing for us. But before that, we popped over to see fireworks conjurer Wordofthe Wise, who kindly invited us to see a copy of the region where all the Corn fun began. 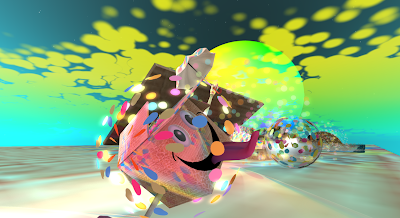 As always, the addresses of the destinations are at the end of the post.

Read more »
Posted by Thirza Ember at 6:04 AM No comments:

Our second destination this week is a special place because it bridges the gap between the virtual and the real and shows what a wonderful tool Opensim can be for academics and professionals. Located on the Science Circle Grid, it is reconstruction of Portage, an archeological site in Pennsylvania, built by Nova Saunders.

At the side of a tranquil canal, Nova and fellow Science Circle member Quaezar Agnomen  were waiting for us, to explain the build and share the experience. You can read about the first part of this week's Safari in the post called 'The Folly of Phaedra'. As always the address of the destination is at the end of the post.
The settlement of Portage, PA was established in 1830's during the presidency of Andrew Jackson, at a time when the United States was pushing Westwards with a passion. It was an era of fast moving technological revolution.           Portage is located about 70 miles due west of Pittsburgh, and while there is a town in the area, the original settlement is all but gone from the landscape.
In the 60 years preceding the heyday of Portage, canal technology had been considered, especially in Europe,  the best way to move heavy and bulky goods from place to place. However, by 1820, a newfangled means of transport was beginning to be talked about, invested in, and dreamed of, first in England and then further afield - trains. So Portage found itself on the cusp of transition between the older, more organic form of transport, by water, and the bold and speedy new one - the steam train.
Read more »
Posted by Thirza Ember at 7:57 AM 1 comment:

The Folly of Phaedra

Jeff Kelley:   how many avatars have we lost ?

Ernest Moncrieff: are we in a Wormhole?

George Equus: I am still in one piece, even hat came along for the ride

This week's visits are split across two posts, because reasons. Why folly? Because if you don't go to see Phaedra for yourself you're nuts. Or maybe it's the folly of the Safari, thinking we could see more than a tiny part of this extraordinary build. 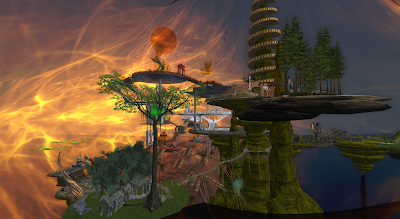 It looks a bit like a folly, constructed in the form of a composite tower or Parnassus. Phaedra rises from the Ocean of Ignis Fatuus grid like a mountain surrounded by a solar wind.

The first thing I heard on arriving on Phaedra with the group was Kelso, warning us about piranhas.  There had been a strange lag on the Safari clubhouse sim all day, so it seemed quite believable that around this strange towering installation, another brilliant creation by Max Hill, owner of Ignis Fatuus Grid, there might well be avatar eating fish.

It was going to be an epic Safari. This is part one of two great destinations and, as always, the addresses are at the end of this post.

Read more »
Posted by Thirza Ember at 2:55 AM No comments: 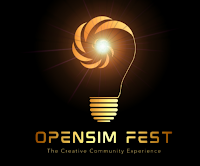 OpensimFest 2022 is heading our way, and confess it, you're curious.
The overall theme is 'Medieval/Fantasy' and the whole thing will be happening in July, but just what's going on and how can you take part?
I asked IMA guru Shelenn Ayres about it, from the origins of the event to the practical details, well, as many as are available at this early stage.
But first up, what in the virtual world inspired her to take on this crazy project?
Read more »
Posted by Thirza Ember at 2:38 AM 1 comment:

There is crazy good and crazy bad. We all know that. Second Life has been, for many of us, crazy Good, in its way. It was thus for Safari regular Loru Destiny and the three friends who, together with her, form the heart and soul of ArtDestiny grid, our first destination this week. It's a very attractive combination of so much art and beauty that for us to visit, it has to be fate. Addresses, as always, at the end of the post. 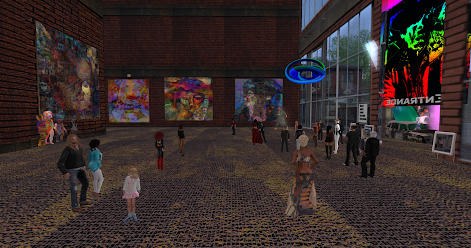 We teleported over and arrived in a large, airy art gallery, everyone rezzing pretty quickly considering how many we were, and that it was not a great night for the internet. The whole visit was so well organized, it was pure pleasure to meet our hosts and take a tour around Spooky City.
Read more »
Posted by Thirza Ember at 2:46 AM No comments:

Safari people can fit a lot into a small space, whether it's time - a bare ninety minutes - or the narrow tunnels of the unusual Andron Rae build, 'The Caves', on Neverworld, our second destination this week.  But before the spelunking, there was the great leap forward, in terms of bag and baggage, as imagined by Ai Austin, who you may have come across on VUE grid, or (as happened to us) encountered him on Space Camp, a Gerry Anderson inspired region on OSGrid.

But before we went anywhere, everyone came to the Clubhouse, which is such a delight, as familiar faces and old friends and new pals all show up. Community organizer  Valibrarian Gregg joined us, I think for the first time, and Prax and Alexina, who were Safari regulars back in the early days came along, as did musician Whirli Placebo, who has played for the Safari many a time, and was this time in off-duty mode.   For the address of the places we visited, look at the end of this post, as usual.
Read more »
Posted by Thirza Ember at 7:45 AM 2 comments: