They are large, noisy, and it was once thought that bumblebee flight defied the laws of physics. So, very much like the Safari experience, where anyone who is lag intolerant is going to fall at the first hurdle, but those brave souls who push through the freeze/chat lag/slow rez/crash/lost aspects of group hypergridding are rewarded by destinations that are positively blooming. This week we visited three destinations that are ripe, one might say, for cross pollination. Addresses at the end of the post, as always. 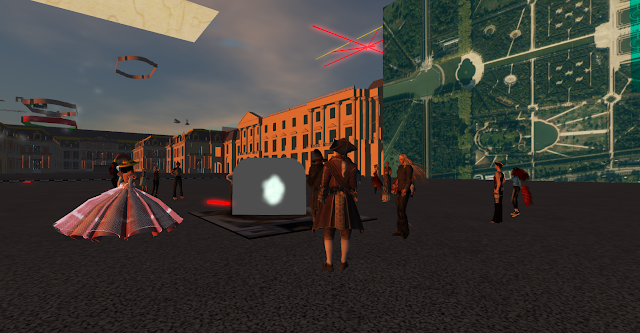 Firstly we headed to Ignis Fatuus Grid. This francophone grid is without doubt one of the loveliest in the hyperverse. You could easily spend a month visiting the landscape and fantasy regions here, and still not see it all.

Read more »
Posted by Thirza Ember at 9:25 AM No comments:

Three destinations, so brace yourselves... if you get lost or crash a lot, come back to the Clubhouse on Francogrid, and we will help you get back into the game!
Each destination lasts just 60 minutes. 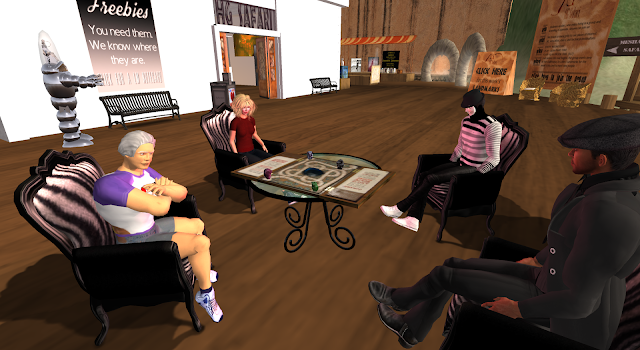 DESTINATION 1 Versailles - a work in progress. 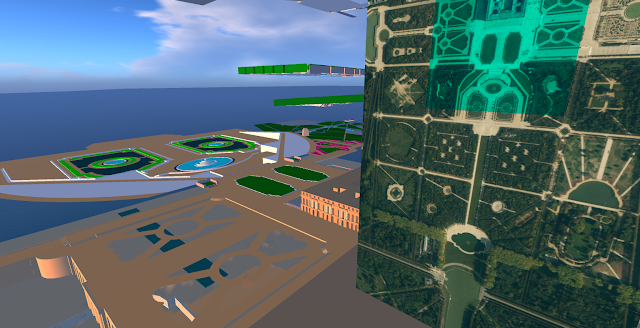 On Ignis Fatuus, Max Hill, Harthelie Deux, Chip Angelvi, and Jeff Kelly are working on a mega project to build a virtual Versailles
Four stops on this tour of Versailles:
Super large build = lag for the group, so we begin on the grid's Welcome region, to load, then use the portal to go to Versailles 2 .

HG Address:   ignis-fatuus.no-ip.biz:8002
...and then look for the Versailles regions on your Map

DESTINATION 2 How much do you know about TanGle? 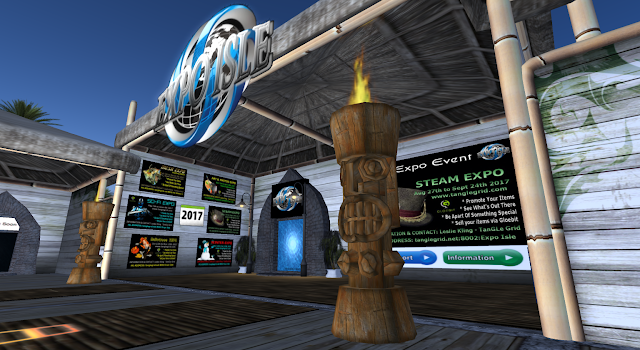 DESTINATION 3 Racing on VarTown
Hans Nerido invites us to his new grid, Vartown, for a super Load test. 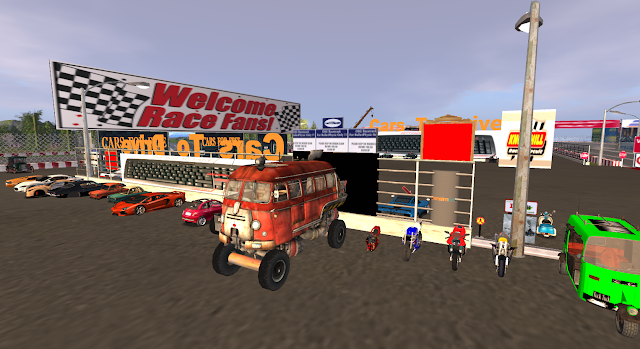 Part of the fun, RACING on his famous racetrack, ported to the new grid after 5 years in OSGrid, where over 3k visitors enjoyed the free cars and great curves. 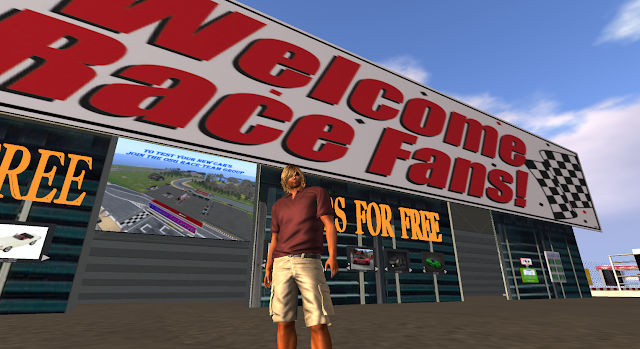 AvatarFest begins today, it's a weekend of poetry and music, freebies and entertaining builds reflecting the creativity of Opensim.
The festival is the fruit of the hard work and imagination of Eryn Galen and Han Held, along with many notable opensim contributors...

... like Arielle Delamerlibre, who set up the Avatarfest Event in Facebook, Danko Whitfeild,  the folks of Metropolis Grid, and the wonderful Neovo Geesink, an OpenSim hero - you have to go see his build, which has a bunch of useful script tools that you need!
The Fest is at avatarfest.net:6000

Safari rolls with it

The transition is a keen one, I assure you,
... and requires a strong decoction of Seneca and the Stoics
to enable you to grin and bear it. But even this wears off in time.
- Herman Melville, Moby Dick, Chapter 1: Loomings

In his introduction to Moby Dick Herman Melville explains the etymology of the word 'Whale' - it comes from a Teutonic word meaning 'to roll'... and we certainly were rolling all over the place on this week's Safari.
It was Pirate week, and as part of the celebration,  we had a reading from Moby Dick by Emil Jannings of New Media Arts Inc (catch him soon at Avatarfest). The famous novel is a tale of obsession, disaster, and hardship, but also of friendship, resilience, and survival... something grid jumpers in opensim can heartily relate to.

Yesterday was Talk Like A Pirate day, so we're doing the Pirate thing on Safari this week... 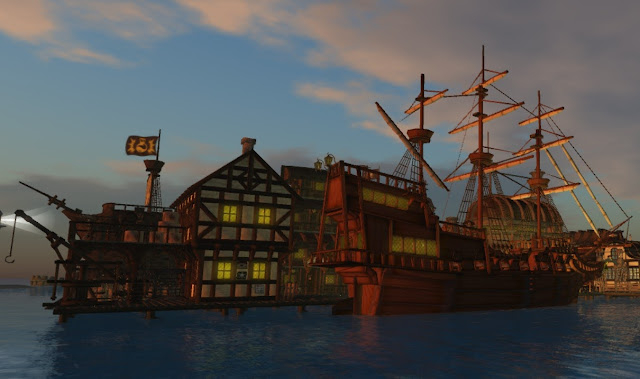 DESTINATION 1 Pirates on Dereos
Vivienne and Victor Clary welcome us to their seafaring regions, for a dance (and maybe some freebie shopping!)
dereos.org:80:pssmg sea 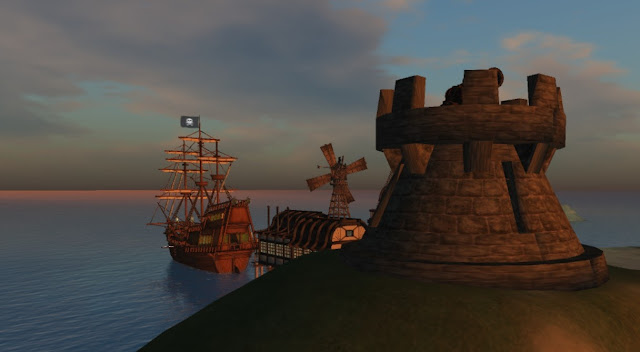 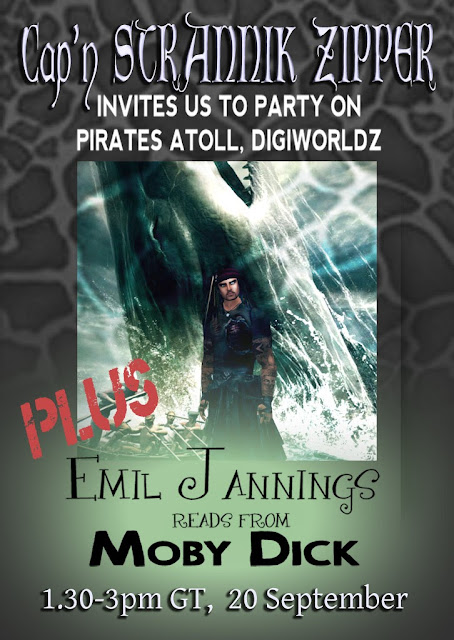 Posted by Thirza Ember at 4:59 AM No comments:

It's been a while since the Safari visited Futurelab and South Horizon, regions that form one of the best art and performance regions  on Metropolis, and our return was a veritable four course feast of words, colors, music and remarkable images. 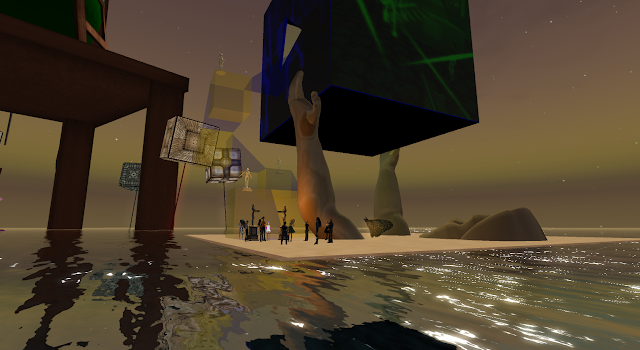 Juliette Surrealdreaming, the perfect hostess, led us seamlessly from place to place as we sampled a literary tribute, an original installation, a curated show of 'rl' art, and a fabulous light show. HG Addresses of the places we visited at the end of the post.

Here are the details of today's Safari trip
Two spectacular destinations this week
DESTINATION 1 (90 minutes)
Snow Crash on Metropolis, by Art Blue and Juliette Surrealdreaming
This is a performance to celebrate the 25th anniversary of the novel Snow Crash, which gave rise to the vw use of the word 'metaverse'.
This performance was originally part of a Second Life event.
hypergrid.org:8002:futurelab 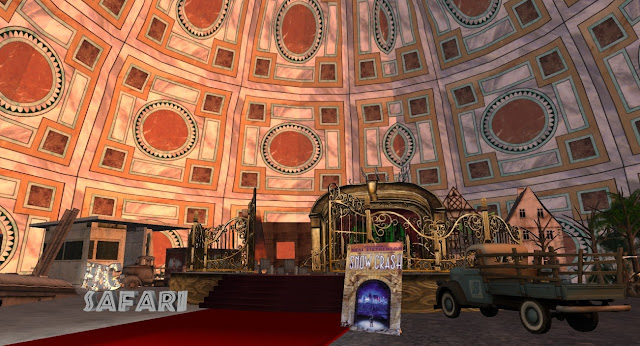 DESTINATION 2 (90 minutes) Here Comes The SUN! A party to celebrate the contribution of Sunbeam Magic to the opensim community, with music, dancing, and more. Our host is Bill Blight, and there will be lively music and dancing.
Wear your wings!
grid.opensim.life:8002:fairy sunbeams 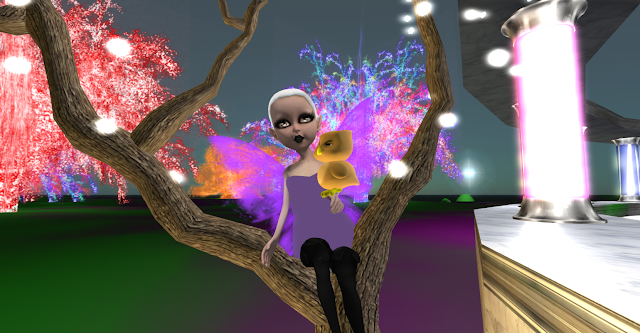 Posted by Thirza Ember at 3:36 AM No comments:

What I Learned from Miney

Some people step away from their online presence with a big, drama filled dust-up, or do the shock-overnight-exit; some make a long fond public goodbye, and others disappear gracefully. It's a choice all of us eventually will make, and there is no right way to do it, for behind the screens and scenes, a life our virtual friends can only hazily perceive is going through concrete changes. When someone moves on, we, the friends left behind, have a duty to respect and remember. 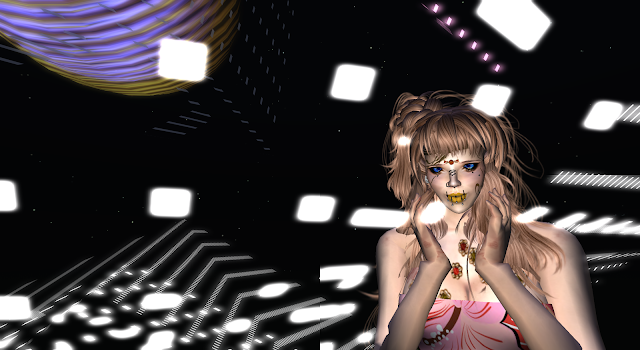 One of the most intriguing parts of virtual life is to muse on the names people pick for themselves. It is a little romance about the character behind the avatar.
Minethere Always, or Athanasios, is one of those names full of hidden meaning. You know you're dealing with a poet, with a life full of incident and feeling. That's the first thing I learned about Miney.

Well, maybe not the code, but for sure we broke Neiferleaf, at least for a little while. Yet, would it really be a Safari if there was no crashing?
Exactly. 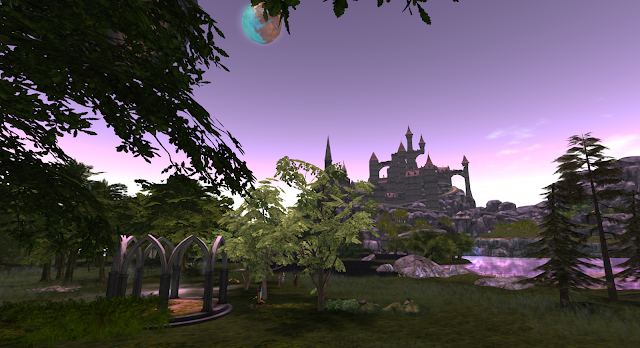 Back after a two month break, over 40 people joined - or tried to join - the Safari this week, a sign that the interest in opensim destinations remains as strong as ever. Two really interesting places were our goals on this our 155th outing - Vibel grid, and CitizenFour on Osgrid - complete HG addresses at the end of the post.

Read more »
Posted by Thirza Ember at 3:14 PM No comments:

Today is the first day of the 2017/2018 season of Safari trips around the hyperverse, so welcome back to the crashy, crazy, creative and often semi-nude adventures of group hypergridding.
There are some new features of the Safari.
We have a new base on Mobius Grid, courtesy of Serra Royale. The new base was put together by Wizardoz Chrome, and contains some information about our trips and some freebies.
Spike Sol has added some HG Safari information, in both English and German, on the Weltraumbahnhof, the hypergrid portal base on her grid, Soloton.

Read more »
Posted by Thirza Ember at 1:01 AM No comments: