Safari by the Numbers

Tip Corbett in the real world Gregory Hall put on a wonderful concert for the Safari this week, inspired by conversations with Wizard Gynoid on the theme of "The Aesthetics of Advanced Musical Scales in Words and Music".
Originally the concert was due to be on the HG Safari sim on 3rdRockGrid, but the grid showed up as offline until just before the Safari was due to begin, so the event reverted to Francogrid. That meant we missed out on seeing most of Wizard's geometry. These are some highlights of what happened, and here is the link to the audio of the whole concert.
As ever, URIs for this week's destinations are at the end of the post, which alone cannot do justice to Tip's lovely voice on stream, let alone his magnificent music.

This week's Safari event had plenty of competition, and that is a great thing. It's a tangible sign that OpenSim is far from a collection of empty grids. From the inauguration of the new Hypergrid sim on Francogrid, to the VWBPE Conference on Avacon to the weekly dance party on Metropolis to 3rdRockGrid's regular live music concert hosted by Zinnia Frenzy,  there was plenty to do.
But for the Safari, this week was Spockfari, a chance to honor and remember Leonard Nimoy, and to visit two extraordinary Star Trek builds in OpenSim, on 3rdRockGrid, and LostWorld.
URIs of each region are at the end of the post.

First stop was on 3rdRockGrid, the home of the USS Davy Crockett, which is ... Fascinating.
Selenmoira: Ladies and Gentlemen Welcome aboard the USS Davy-Crockett. If you like, we have prepared a champagne bowl over there.
Truelie.Ellen: just a sip... must stay rational
Fuschia.Nightfire: champagne!  oh cool, it gives you the whole tray. That should keep me going for half an hour or so.

It's time for you to give back!
Please help us with a new project, Safari Suggestions. The idea is to give every hypergridder the chance to name five memorable places in open sim, and share their thoughts and Landmarks with others. This is not a popularity contest, but more a chance for you to let us know a bit more about you and your tastes.
You can suggest your own sim, or not, there's no rule against self promotion. Don't feel you have to put the five most 'important' places, or limit yourself to Safari destinations. Maybe you like art, or education sims, perhaps let people know about some good free shopping regions, or tell them about community or music events. It's up to you.
It's harder than it sounds! Can't remember the name of a place we saw while on Safari? 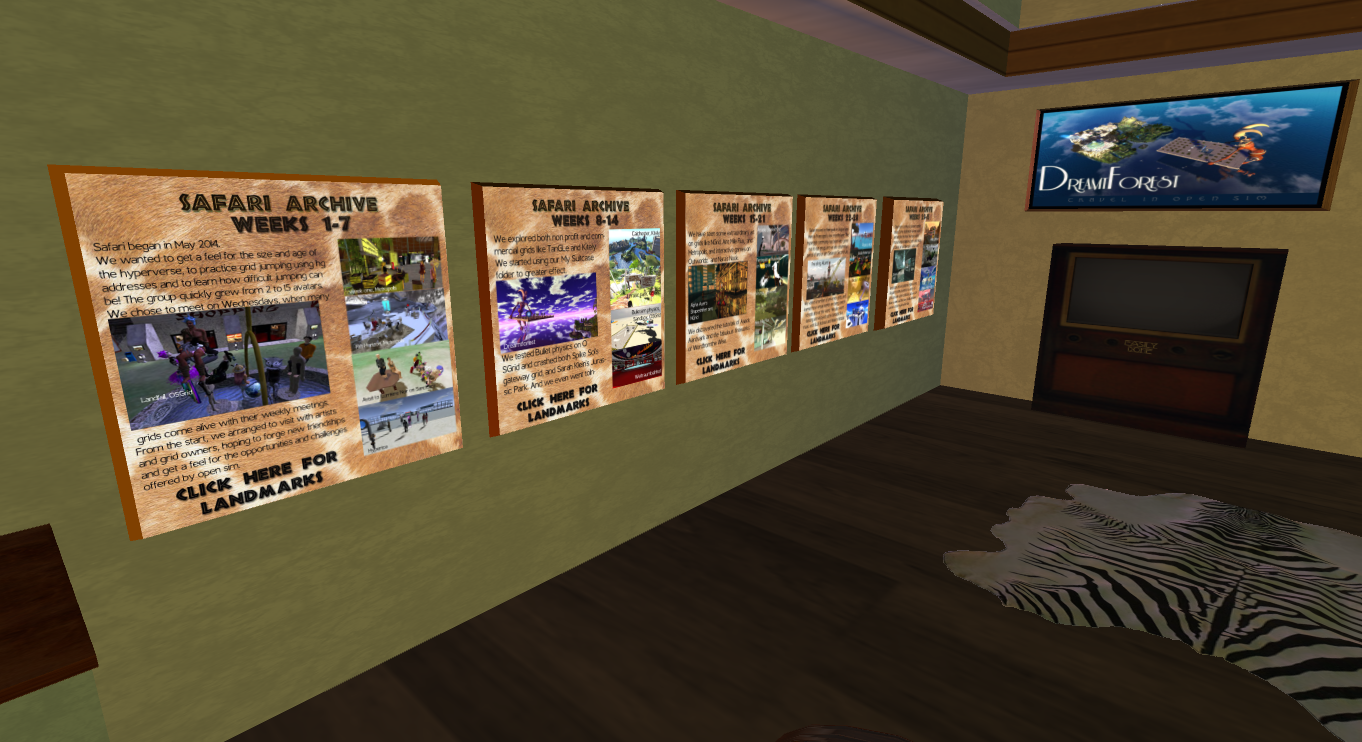 Looking back through this blog may jog your memory, or the Safari Archive inside the clubhouse may also help.
Once you've chosen five places, what next?

Read more »
Posted by Thirza Ember at 9:09 AM No comments:

Email ThisBlogThis!Share to TwitterShare to FacebookShare to Pinterest
Labels: art in opensim, hypergridding

Institutions. We all love them, and most of us belong in one. This week three SL/opensim crossovers were our destinations, each one an epic in its own way. First up,  Seanchai Library which this month celebrates seven years since it was founded in Second Life. That's a big deal when you think of all the performances that this group has put on, and all the money they have collected for charity too. We met on sim Inis Arcain in Kitely to hear the short story 'The Bard' performed by Caledonia Skytower. This is a tale of druids and warriors and ancient angst, and one of the most memorable menacing laughs in the metaverse.

Caledonia set things up so we could hear her via streaming anywhere on the sim, making it possible to go wandering around the build without missing any of the story, also making it easier on those of us who find that Voice does not work well when

Fun with the Frenchies

What keeps a grid alive? A sense of place, a sense of purpose. That is the secret behind Francogrid's longevity. The grid is founded on good old French ideals like Liberty and Fraternity, and they mean it. Freedom is paramount on the grid. A free exchange of knowledge. Creativity given the freedom to grow. And free space. The grid has an impressive history of sims donated to creative people. Freedom too from the humdrum cookie cutter architecture of the past.

The English language is, obviously, a crushing force for communication in the metaverse. In Francogrid, just about everyone makes an effort to speak English if they meet a non-francophone, however, this grid does a little bit to push back and remind us all that there are other languages out there. For some people, this may mean stepping

Read more »
Posted by Thirza Ember at 6:47 AM No comments:

This week Safari began with music and a big ole crash. Wolem Wobbit played the blues for us on the dance floor on hgsafari sim. Wolem is working on a great performance sim on Metropolis grid, called Chicago Blues. Go visit if you get a chance, you'll like it. 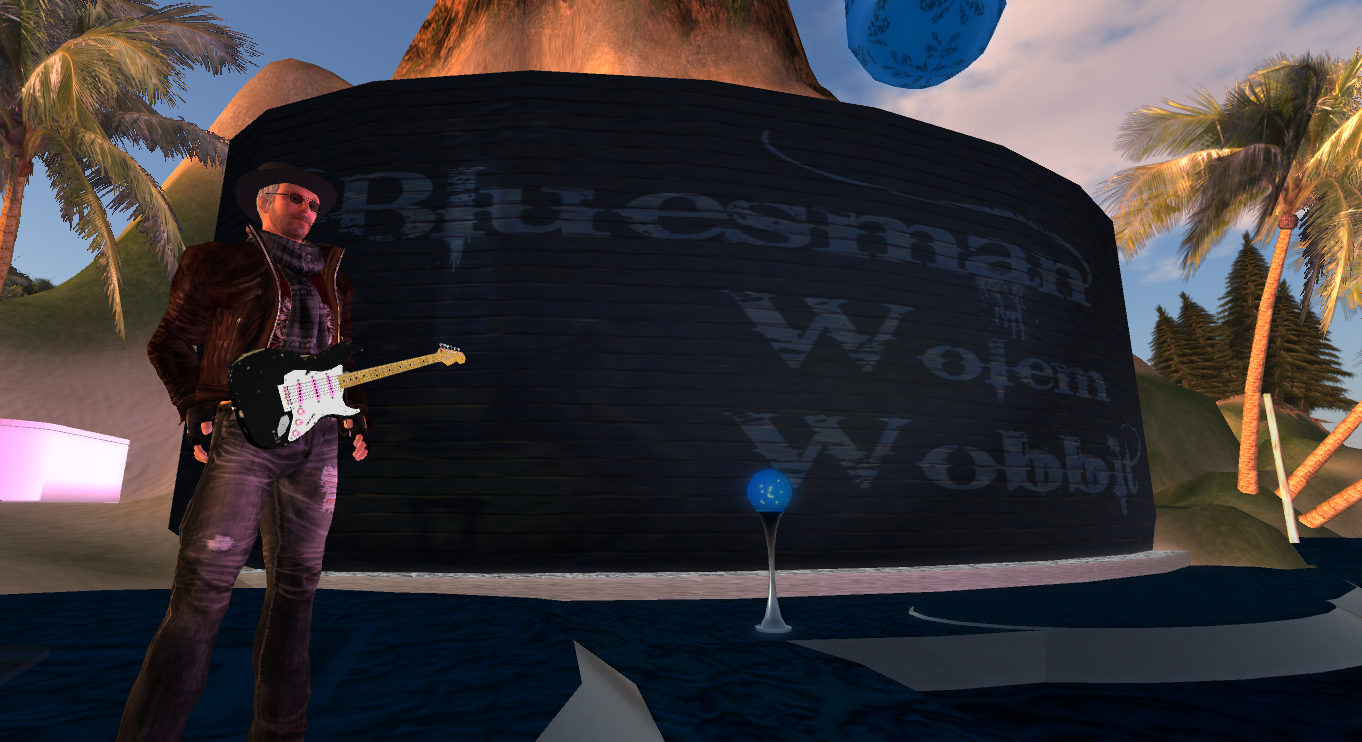 It took a while for stream to kick in. Wolem did back flips while we waited. I was thinking of all the signage I should have put up to make it easier for people to understand where we are and where we're going, but let's face it, nobody actually reads anything. So

Read more »
Posted by Thirza Ember at 6:46 AM No comments: