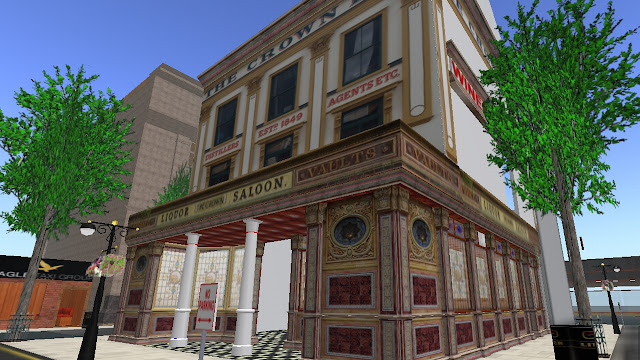 Happy Saint Paddy's to you, if you're a believer. You're not going to be short of places to celebrate, but make Belfast in OSGrid part of your patriotic pub crawl today. They will have live music starting at 1pm SLT, (that's this evening from 9, for us in Europe) and the lineup includes Joaquin Gustav, Truelie Ellen, and some DJ's playing 'rare Irish Vinyl' to finish up with. All this, free Guiness - and the Titanic's 100th birthday - can you afford not to be there? 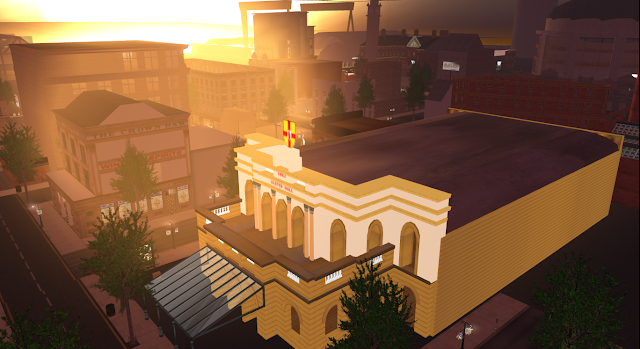 In virtual worlds, we're always lamenting the transient nature of builds, but the real world can be just as bad. The city of Belfast has had much of its cultural heart ripped out over the years; not the marble mausoleums of Power, but the beating heart of real people, in the form of familiar landmarks, beloved, if dilapidated watering holes, and those everyday places that are as the air we breathe, an unassuming part of ourselves. In the past few decades, property developers have carved up the shabbier areas, often in a high handed way, and sometimes, the public has fought back, The Rotterdam is a case in point. But not all of it can be protected. It's a nice paradox, in a city of paradoxes, to see how stoifan nbmcmedia,  Izzie Applewhite, Paul Emery, Rebecca Travis, and the great Bob Solo are using virtual worlds to save the memories. 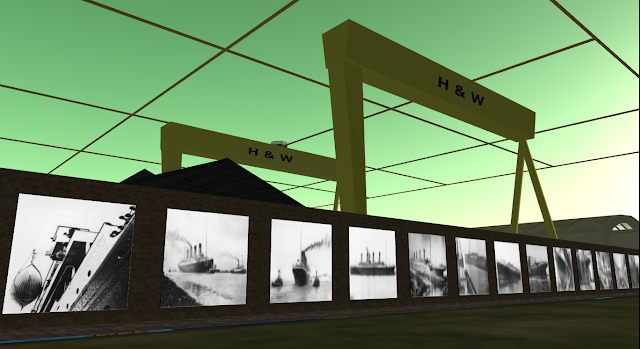 The Titanic was built in Belfast at the Harland and Wolff yard, and they've done something the preposterous James Cameron can never do - they have brought the ship home for all to see. It lies muffled in misty  water in a wet dock, demure and decaying, occasionally hinting at its former glory. 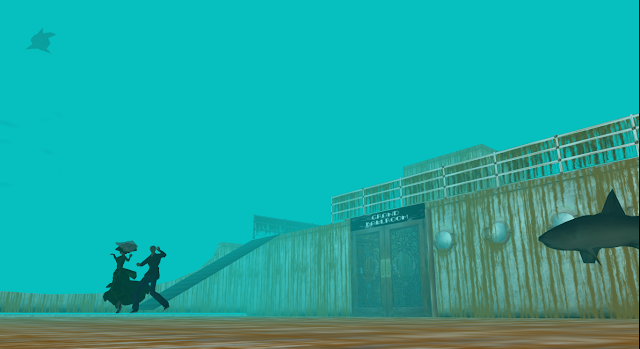 There's a real sense of haunted history down here. Fish pop out of the railings, and once in a while, you'll think you saw a ghost in the half light. 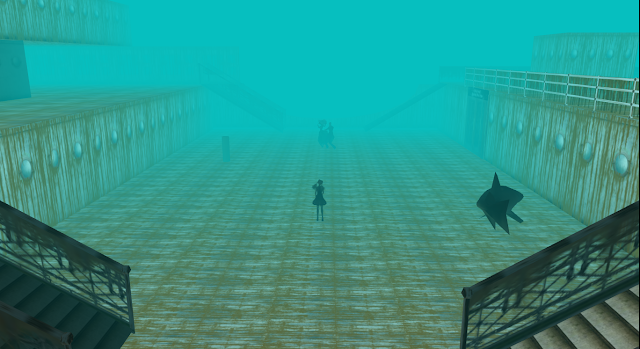 Stoifan was dancing what appeared to be the last waltz with the lovely Mauvereen O'Hara as we chatted. The shark circled hungrily, but we didn't let that bother us. I peeped into the drowned Ballroom. You could almost hear the piano tinlking away. Spooky. 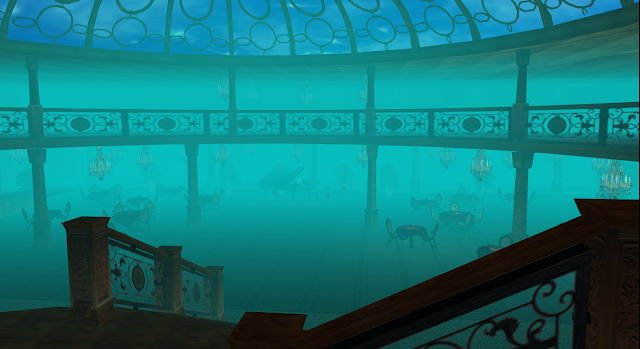 stoifan nbmcmedia: I started building in SL 6 years ago this June. I built a replica of the Rotterdam and ran The Maritime as well. But I wanted to build other buildings that were at risk or already gone, some from bombs during troubles, some from greedy property developers.  I've been in osgrid about two and half  years, now. I met all my fellow builders in SL, but we opted for OSGrid for a number of reasons: the expense, and because here we have full control over the servers. We have 15 sims here, 4 on Kitely and another 4 standalone, where we are building virtual Detroit.
The team make OAR exports (a copy of an entire sim, including the land) of their builds, and in particular are looking to attract new users by making their Titanic build  available in different forms, and there's a strong emphasis on the teaching and heritage here. 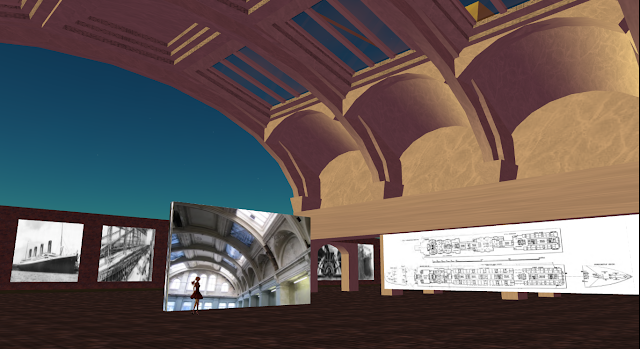 stoifan nbmcmedia: It's a great way to introduce people to virtual reality. I wouldn't want to put anyone through the nitemare of their first time in SL. Kitely is by far the easiest way to get new users to try out virtual worlds. People can download the OAR then load to Kitely and have their own private titanic anniversary in a few clicks! We also have a version open to public on Kitely. We even have a sim-on-a-stick version, with premade characters that can be used for education, for example, behind a school firewall, so kids can explore the deck, and the engine rooms and get a feel for the place and the time in a truly ...immersive environment. 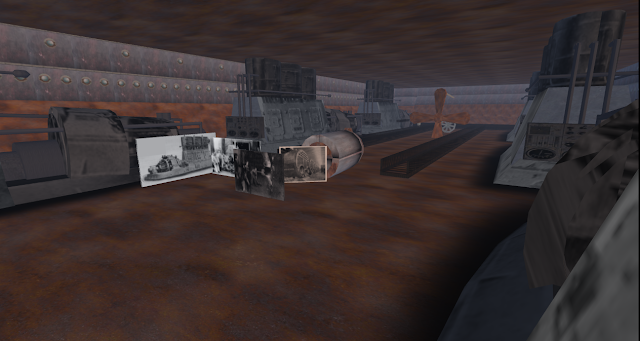 We decided to take a stroll. Mauvereen was none to happy to be abandoned. These bots have feelings, too.
Mauvereen Ohara: Jaysus your a clumsy big countryman you have left my feet like boiled hams feck off and learn how to dance gracefully like that lovely stiofain x! 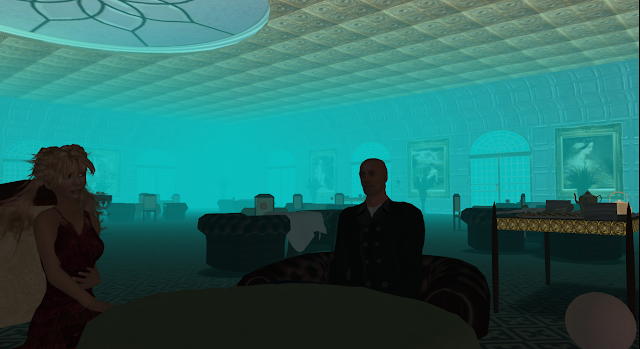 We moved on to the Tea Room, a huge expanse of elegant tables.  A photo in the window shows just how close it comes to the real thing. 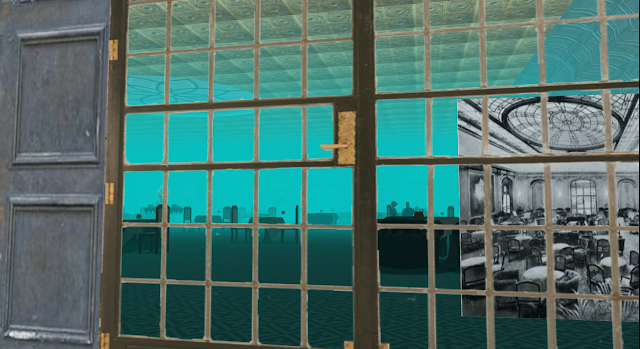 stiofain nbmcmedia: It is important that Belfast reclaims the Titanic heritage. About half the people I talk to don't know it was built in the city. For me, there's a personal connection. My great grandfather was a master carpenter and instrument maker, and his firm worked on the original Titanic. I'm not sure exactly what he made, but is nice to think I maybe built the same thing out of pixels that he made from mahogany or cedarwood, a hundred yrs ago. 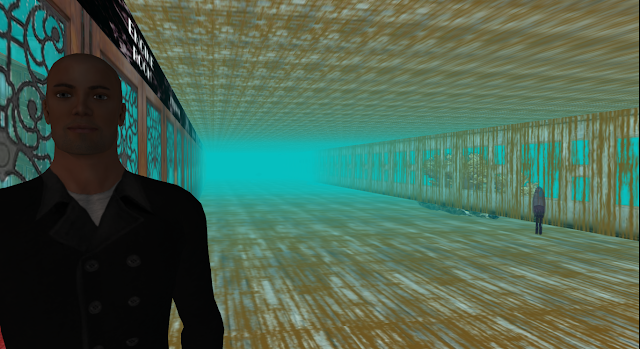 Posted by Thirza Ember at 2:30 AM No comments:

Maria Korolov rocks, but you knew that already, of course. If you've never been to her grid Hyperica, you've missed out. 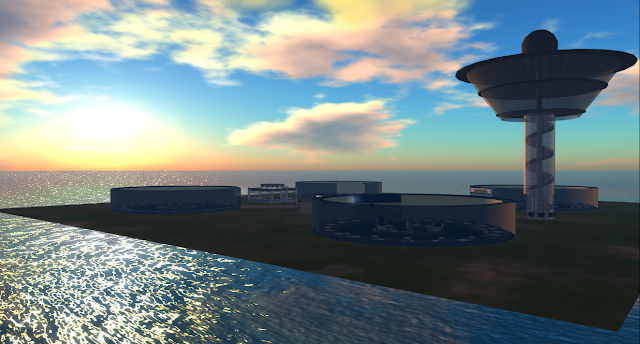 It's not a place of soaring original architecture, or outstanding natural beauty, but it has a poetry of its own, as a train station or an airport. The poetry of possibilities. 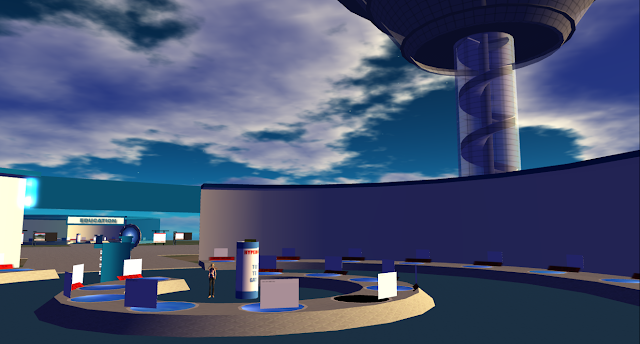 The hyper pools are handily organized in 'Activities, Education, Shopping and Major Grids', but don't feel overwhelmed, many destinations are duplicated in each pavilion. This in fact one of three jumping nodes, Lower, middle and Upper, helping hyper grid travellers hop up and down, bridging the gap from one part of opensim to another. Just for spritz and giggles, we dived into the pool marked virtyou grid, to see what would happen. 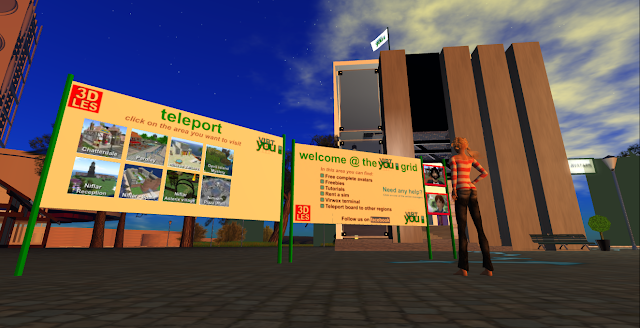 virtyou is a caps-off, polyglot haven for noobs, human-interfaced by Nick Zwart and Torrid Luna. Nick has a black beard (vintage '06, by the look of it) which shouldn't be held against anyone. Least of all me. Anyway they were both offline today, though I think I touched something to summon them, but since nobody showed, no harm done, right?
virtyou has a number of attractions, and where better to start than Asterix Village. It's as cute as can be, with a huge fat statue of Obelix just outside those Gallic gates. 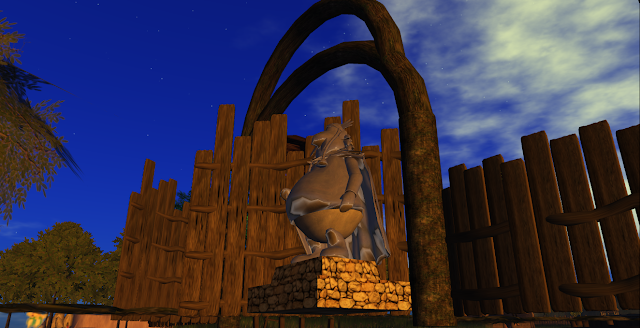 Where was his diminutive friend? Nowhere to be seen, but maybe it's a work in progress. Or we may have missed him in the fog. 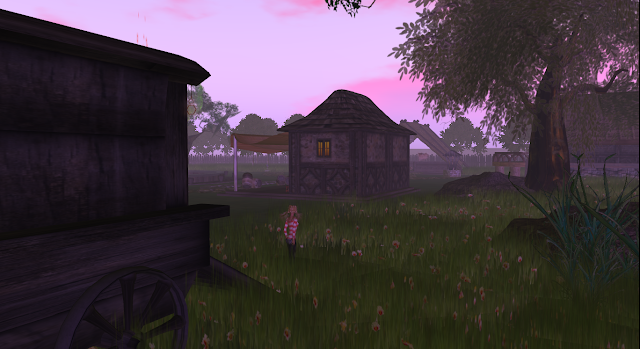 If you have any kind of Poser or QAvimator skillz, and are a fan of Asterix, you might want to approach Master Niflar, a few cute poses would bring this place to life. As it was, Goldilocks decided to risk it with the only pose at hand. There didn't seem to be any bears about. 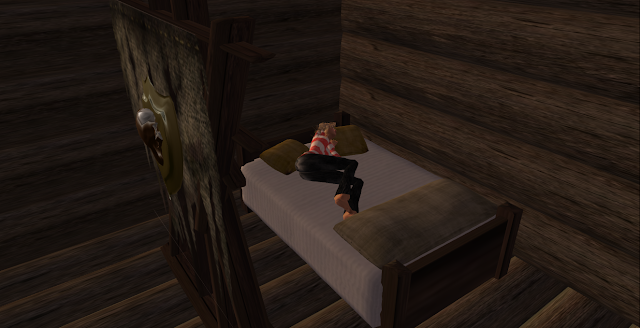 Still, can't spend all day laying around. Dawn was rising, and so was the damp. You could almost smell the castrum over the horizon, and there was an uneasy feeling that the tribe might be back at any moment, and not be all that glad to see us. 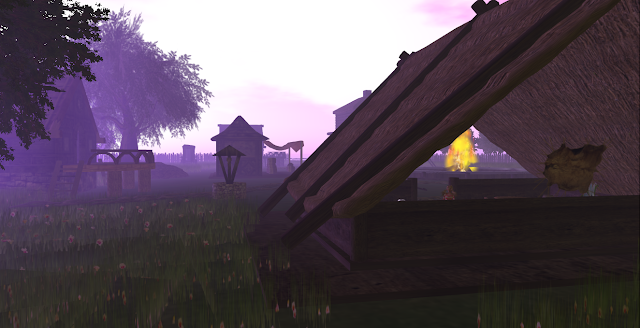 Shoppppping! Couldn't resist the opportunity to check out the Mall. Not a lot on sale, as yet, at the Plaza, but the architecture was very classy. This is where making and importing your own clothes comes in handy, people. I won't even say the word pigtails. 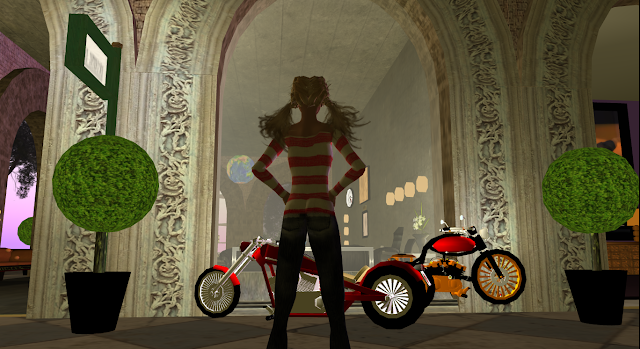 The architecture is great, but I must confess to not being crazy about the furniture, or the noob avatars, available all over the grid, which are straight out of Scaryville. I guess that beard was a bit of a clue. What's a little disconcerting is that virtyou opened in 2009, and from the looks of things, time has stood still. 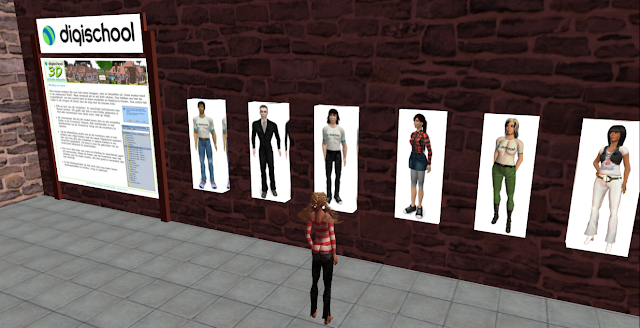 Much more stylish, the little flower shop. You may not be able to buy anything but it's kind of fun to play shop assistant. Gosh is that the time. 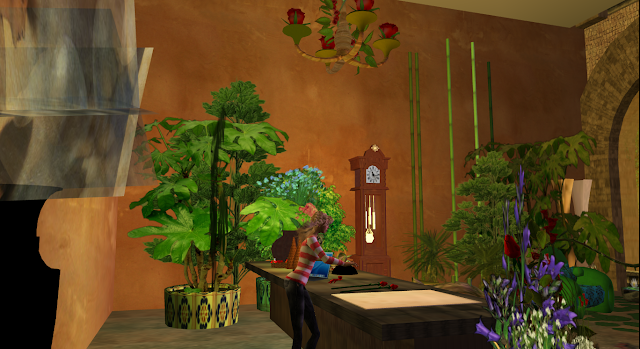 Jaynine Scarborough,  SL oldbie and Berlin-based vocalist, is the source of all this elegance, her store just a few doors down from the flower shop offered a freebie dress, and some other interesting packages that wouldn't open, but that's OK. 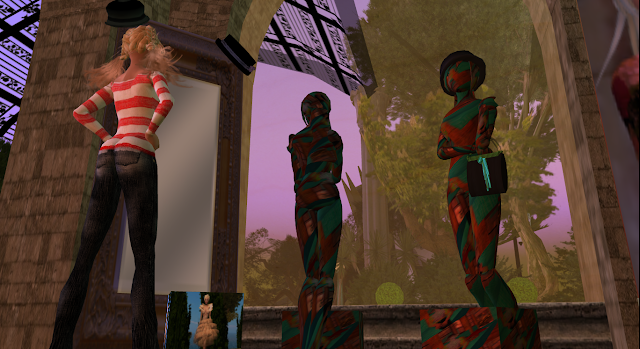 Probably they wouldn't have made the trip back to Jokaydia anyway. It's a mad world. 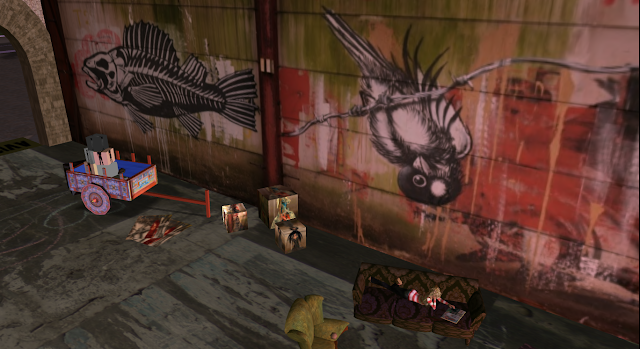 The wall art, mannequins and poses, it's a great place. And oh, that voice.

The Devil's Island Mystery sim was a bit of a letdown, but the French newbie area is touted as the smallest virtual village, but has full size recycling bins. 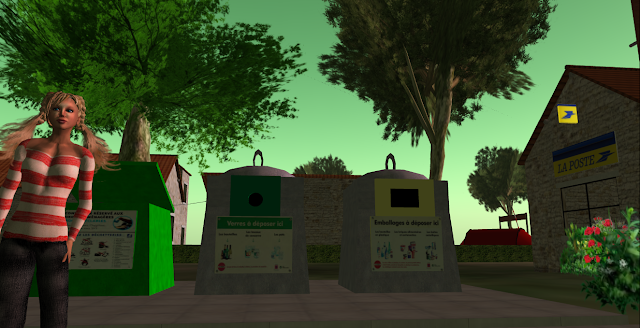 I know you're supposed to make newcomers feel at home with lots of familiar references, but this seemed a bit much. 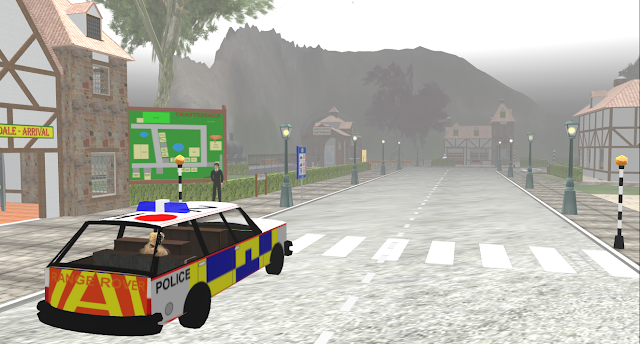 In Chatterdale, 'the world's smallest hamlet', (huh, that's where he ended up) I found myself in the back of a cop car within seconds. Guess the Thought Police were onto me. The village, which had overdosed on half-timbering, had a snakes and ladders game in an open area which, I'm sure, breaks some health and safety rules.

Finally and bizarrely, a pile of rocks where you'd expect to find a house, camming inside it seemed solid. Very odd. What is it? Virtually no idea. 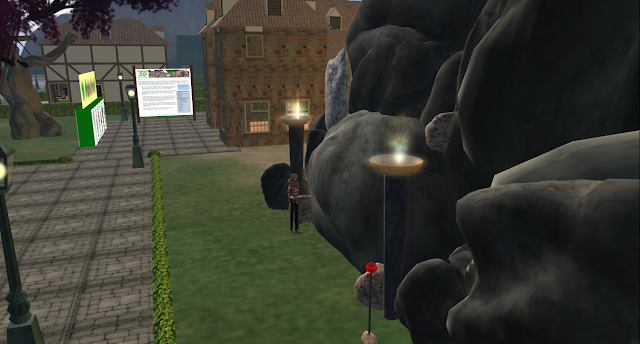 Posted by Thirza Ember at 10:52 AM No comments: