Getting Seen in Open Sim

Is this scenario familiar to you?
You like to build things, but Second Life has become too expensive or dramatic or stale or commercial for your taste, so you decide to move to open sim.
You've overcome the hurdle of being a noob again, you've found a region on a sympathetic and cheap grid, or set up your own minigrid and hooked it up to hypergridding. (Which is a lot easier than it sounds, just ask Livio Korobase.) You've gone through an intense period of creating, facing the challenges of sourcing material away from the SL Marketplace, dealing with the maddening glitches that open sim likes to throw at builders, and kaboom - now you have a bunch of beautiful stuff on your sim.
You look up from your work and suddenly realize that Hey, this is not like SL where you can send out a notice in some spammy art or building group, pay a musician 6 or 7k Lindens, and throw a vernissage or housewarming party with 40 hot bodies to pat you on the back.
So how can you get the positive feedback which is an essential part of the creative process? How does it work in Open Sim? What can you do?

Read more »
Posted by Thirza Ember at 7:17 AM No comments:

Games. Who doesn't love them?
But what kind of games work best in open sim?
We sat around the fire in the Safari Clubhouse and talked about it this week. Some don't like games in opensim at all, they think it is really better used for building and experimenting. The instability of the code, others mentioned, is a challenge when it comes to group activities and complicated scripts. Selby Evans mentioned an interesting solution to lag or reliability woes; in Second Life some of his friends organize a weekly version of Hollywood Squares on Thursdays, in which case the only scripts you have to worry about are the contestant's. 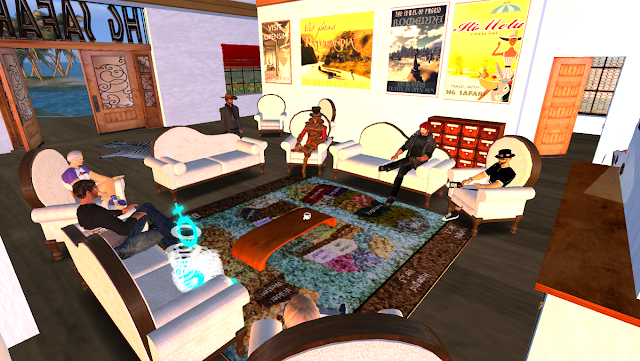 When it comes to playing games in the hyperverse, builders are faced with the unenviable task of dealing with the competition of other dedicated and commercially perfect video games. How can you get people to play at racing or shoot 'em up  in opensim when they could be having a go at Need for Speed or Call of Duty. Well, perhaps for the company?  Something the wide open spaces of the hypergrid is always a bit short of.

Read more »
Posted by Thirza Ember at 2:41 PM No comments:

Congratulations to Craft, and all who sail in her, the grid turns 6 years old on Wednesday January 27 and celebrates with a party in the evening, European time, and the announcement of the results of the Annual Building Contest.
Craft styles itself 'The Friendly Grid' and that title is well deserved. Few opensim grids can boast such a long and successful life, and the secret is assuredly the community spirit.
But how do you create this kind of enduring family? It starts at the top.
In 2009 Licu Rau founded Craft, along with his partner Tao Quan. Tosha Tyran and her partner, the celebrated and much missed Lumiere Noir, made up the original four members. They were soon joined by friends who had been in Second Life, or in Cyberlandia, an early Italian language opensim grid. Managing a grid, with all the hundreds of little things that can go wrong technically, socially, financially, is not work for the fainthearted, and Tao and Licu have been tireless in their pursuit of other people's happiness.

Read more »
Posted by Thirza Ember at 8:58 AM No comments:


The word maze means to be confused or bewildered, and may be related to Scandinavian words like mas - 'exhausting labor' and masa, a Swedish word meaning 'to be slow or sluggish'. Clearly a natural fit for any Safari. 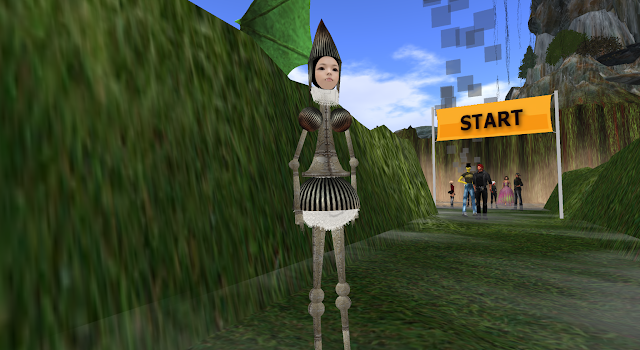 Read more »
Posted by Thirza Ember at 2:18 PM No comments:

Zan and the art of Hypergridding

So now we know.
The secret to an absolutely perfect Safari where nobody loses their hair, gets lost or freezes or has chat lag is...   to predict that everything is going to go horribly wrong and we all need to be ready for multiple crashes.
Or was it the fact we were all invited to keep our attachments at a minimum?
Hmm... it might be that, but we all looked stunning either way, so I'm not sure who paid attention to the 'low lag' dictum.
Making rules about what people can do or bring on Safari would defeat our main purpose, which is that the grids and regions should be the ones that toughen up for the onslaught of visitors, not the visitors pussyfoot around the sims. That may sound selfish, but it is done with love - love of making places visitor friendly, because visitors and appreciation and networking are the lifeblood of any community.
Plus nobody actually reads the notecard, so it would not work anyway.

Read more »
Posted by Thirza Ember at 5:56 AM No comments:

What Is OpenSim For?

What is OpenSim for?
Many things. It's like a large garden, with different flowerbeds, trees, rockeries and ponds, maybe a vegetable patch, and a compost heap too. Each zone  has its own needs, but they are all connected.
By what? Paths, weather conditions, hedges... but above all, the will of the gardener.
So, which are you? Are you planted in the garden, or are you a gardener? Or do you belong to a middle category? And why does it matter?
Over the past few weeks you may have seen a poll on G+ and in Facebook.
This is the G+ Poll, as of today. 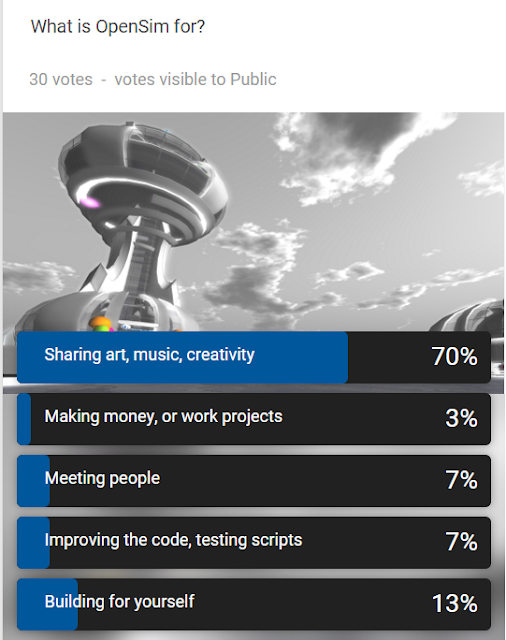 G+ is not a very poll-friendly forum, but the immediacy of the stark question 'What is open sim for' was designed to get your gut reaction. Some kind folks apparently thought I was looking for a wiki definition, rather than a 'choose one' opinion from each participant, but hey, that's G+ for you.

Read more »
Posted by Thirza Ember at 3:59 AM No comments:

There is something of the divine at Radiola.

It is a land that provokes lightheartedness and a light step.
Tread carefully, for you tread on dreams.

And what dreams may come, after a visit to Livio Korobase's  small OpenSim grid, Radiola, remain to be discovered with the closing of your eyes. But first, eyes open, senses on alert. This is a whimsical, sometimes mystical, place of impossible beasts juxtaposed with strange and familiar shapes. 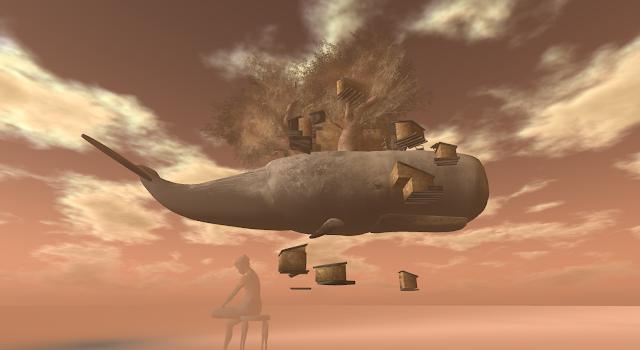 Turn on the radio.
Real music flows and sews the installation together.  Flying up into the uncluttered sky, you will find a building, an industrial basilica, perhaps dedicated to the Patron Saint of AC, St. Tesla, with its sparking mast, a sort of child's windmill, electrified.
Radiant.

Read more »
Posted by Thirza Ember at 3:03 PM No comments:

It's fun to visit new places, and in open sim, 'new' often means places that have only recently come into existence. This week the Safari took a trip over to visit the predominantly German language grid Dereos, founded by Akira Sonoda and a small group of friends, with the technical wizardry of Freaky Tech. We were there to wish them well for their upcoming first anniversary celebration, at the end of this month.
Fancy.Day: Can you see me ok?

Truelie Telling: yes, you got all your parts, hehe
Fancy.Day: Good. Never sure with this platform :)
Truelie Telling: but we haven't gone too many jumps yet
Unadecal Masala: there's still plenty of room for chaos and mayhem
Fancy.Day: I am using Radegast on a windows phone emulator
Unadecal Masala: that's really interesting, Fancy.  Are we all rezzed fine for you?
Fancy.Day: Yes all rezzed but the graphics are a little crude
George Equus: this new 0.9 code is sure making some stir in the pot
Lucy Afarensis: I have found that it causes asset problems if you let it run more than a few days
Truelie Telling: apparently, there are certain scripts that no longer work... including NPCs
Thirza Ember: una, didn't you say you couldn't find inventory you had bought on another grid?
Unadecal Masala: I did say that the inventory I bought at Clutterfly arrived corrupted at OSG... it arrived fine at my grid though.
Lucy Afarensis: never arrived at all for me
Unadecal Masala: Lucy it did arrive, but it generates XML errors and doesn't rez
Thirza Ember: sooo bizarre
On that note, our first stop was Freakyo sim, home to Freaky Tech, who has developed the Arriba software, a fork of Open Sim, on which Dereos Grid is based. But first, some Teravus fun.
Lucy Afarensis: Am I naked ?
Thirza Ember: no Lucy
Aime Socrates: yes Lucy..like million years ago !
Lucy Afarensis: whew
James Atlloud: No naked avs that I can see.
Thirza Ember: I apologize for that James, maybe next time.

Read more »
Posted by Thirza Ember at 1:35 PM No comments: