Last night, in a dual exhibition on Francogrid and SL, Anne Astier (virtually known as Mariaka Nishi) presented her new show, Welcoming Woman. it's a sort of family album, looking at the thoughts and feelings surrounding parenthood. 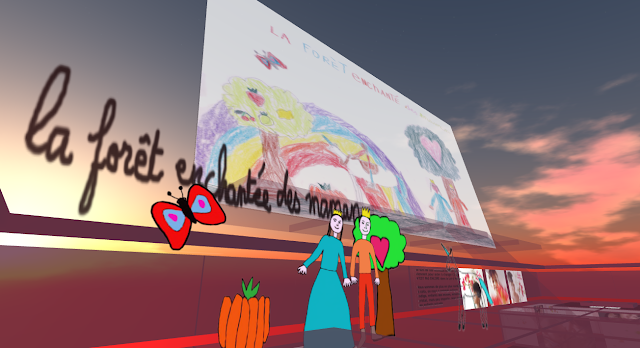 To be honest, not something I could get fired up about; pictures of, and by, other people's kids aren't that interesting. At least not as much as Mum and Dad imagine. However, the show was part of IMAB, the intergrid arts festival, and was the first to involve a dual stream in both worlds. There was a nice big screen at Francogrid, and of course in SL too. The transmission wasn't perfectly smooth; for some of us, on FG, there was no picture despite furious toggling; but luckily the thing was also transmitted on Livestream, so we could all get a chance to see what was happening. Well, we got a good look at the cleavage of the ladies present at the event, anyway. Which I suppose is something Mothery, right? 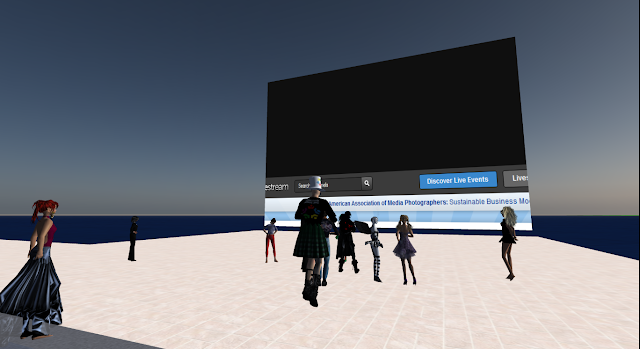 It took 5 attempts to get to FG from home, via Hyperica; when I finally got there, only the tickertape at the bottom of the screen would load for me. Maybe not being a 'local' FG resident prevented me seeing the picture - but it didn't matter. I was far more fascinated by the kilt worn by Francogrid's genial president Fabrice Parisi. Nice knees. 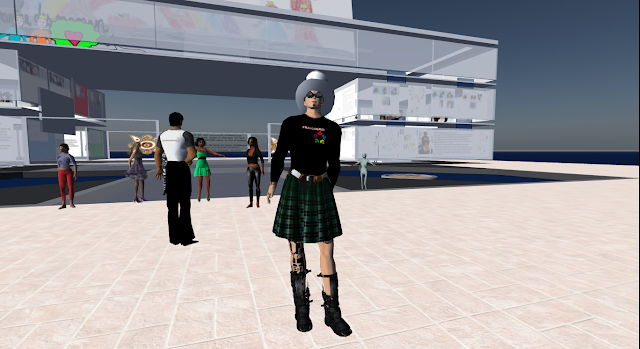 While the group attending the opening in FG was small, there was a fine turnout in Second Life, in part to recognize the work of the Tournicoton Gallery (which closes this week due to financial constraints), and in part no doubt because Ultraviolet Alter was due to perform after the presentation.
Ultra put on a great show, and there were many familiar faces at the event, including the Monarch of SL art, Bryn Oh, sporting an unfamiliar face - this is his new look. I like it a lot; the post-apocalyptic beanie, the army boots and the greatcoat suggest austere times for which the artist is prepared. I suggested a sidearm might be in order - not a utility belt, please, they've been done and done. He mentioned a possible accessory, which would be a paradox of utility - I hope he shows it off to the world soon. 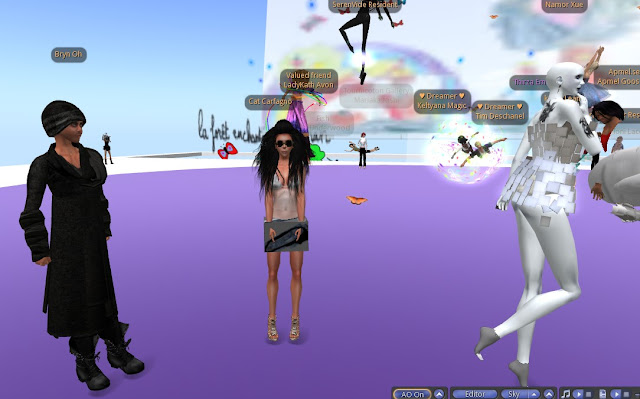 As usual, the Imprudence Viewer makes mesh far more amusing than it's meant to be; Apmel got some great photos of the SL side of the event, go to his blog or his Facebook page to check them out.
On the whole, from the IMAB point of view, the show was a moderate success. Most of the public seemed to know little or anything of Francogrid prior to Mariaka's presentation, so that was a positive step forward, but having identical exhibitions in both worlds does not really encourage anyone to get off their pixellated butts and go into open sim. And although appearance is not everything, people do like to feel they can look their best at events - in many cases it's their only contribution to the evening. Clothes, skins and poses are available, it's up to us to make the most of them, however 'superficial' that side of things may seem. It kind of matters.
Here's hoping we will get more shows in Francogrid soon. It is a lovely grid, full of interesting projects in Cognitive Science, Cinema, Art and Literature. Perhaps, too, more SLers will get the open sim bug, and come and see what's going on.
Kilts option, of course. 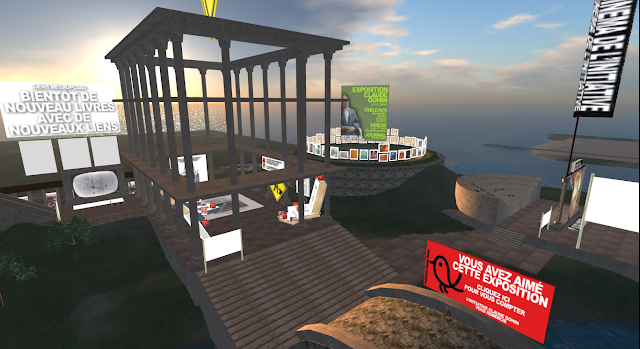 Posted by Thirza Ember at 5:35 AM No comments:

Back to Chat: Twinity

You know exactly how it is. Loads to do, deadlines looming, and that little demon inside you says 'nah... let's go play'. So for absolutely no reason, a trip back to Twinity.
It's been a year, and what has changed. First of all, all the cities have disappeared. Apparently it's due to copyright issues with the Maps that formed the basis for those fabulous builds for which Twinity was rightly famous. *visualizing Googlemaps using a large stick". Well, hold on a minute, looking back, it seems that even a year ago, it wasn't possible to visit Tower Bridge, despite the pics of it plastered all over their site back then.
There was a free apartment waiting for Thirza, on arrival. It's supposed to be in Berlin, but there's no berliner ambiance; could be in a sealed container, since you can't really cam out of the window far enough to see, and you certainly don't seem to be able to go walkabout at all. There is no air here. But hey, real estate. Woot, right? 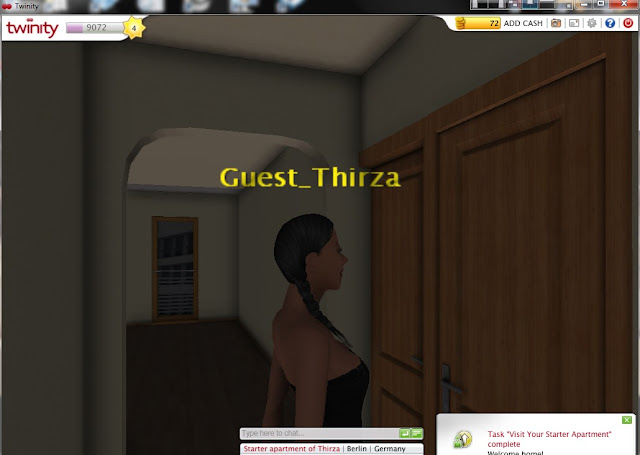 But hanging around in an empty apartment gets old surprisingly quickly. Logical step - go look for people. The main hangout is called The Pyramid, or somesuch name. Invitations to 'parties' and 'events' pop up pretty often on your screen. 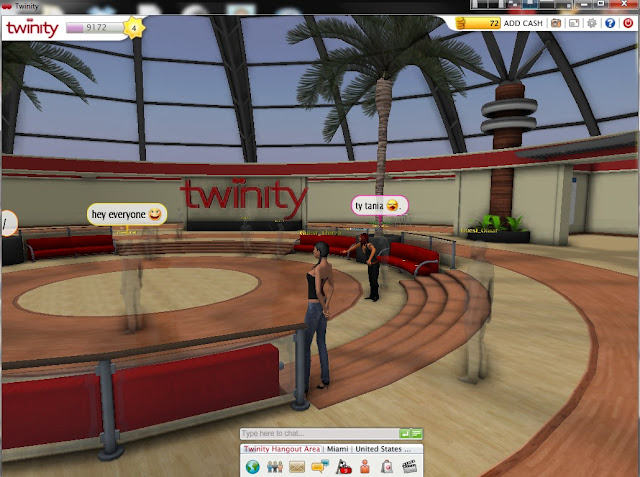 Unrezzed Twinity people are transparent, but anatomically correct - much nicer than SL's lil cloud, and lag seems to be non existent. The conversation was a pretty highbrow. It was really hard to resist the invite to Whitney's party.  It was going to be Awesome. 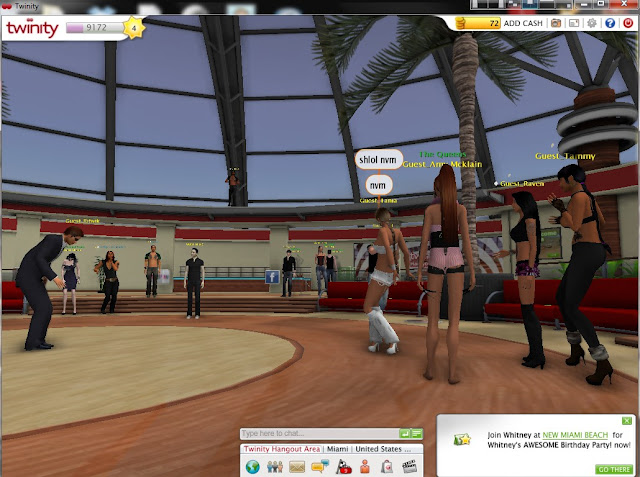 But no! resist! There's so much more to do, than plumb the awesomeness of Whitney's party. This crappy hair has to go. But what alternatives are there?

Read more »
Posted by Thirza Ember at 4:31 PM No comments:

Hobo. I say that, you probably think Thinkerer. But not this time: it's Patti Mallory, aka Judy Muircastle, who for years has had a Hobo dream all her own; a living, growing place of spills and thrills, the Hobo Fun Fair. 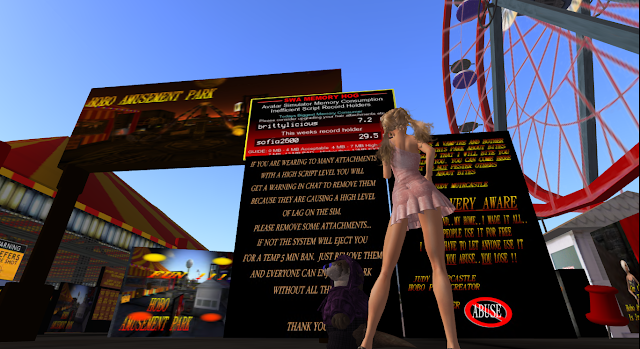 Judy Muircastle: I built my first park on SL in 2008. It was built in the memory of my late RL husband. He felt so sorry for the homeless, and he loved amusement parks in RL,  so I decided to call it Hobo Park. I went to SL under the advice of my RL brother to get my mind off things. When  I learned I could build, I knew right away what I wanted to do, and started studying. It really has helped me heal from it all - it's just so much fun! 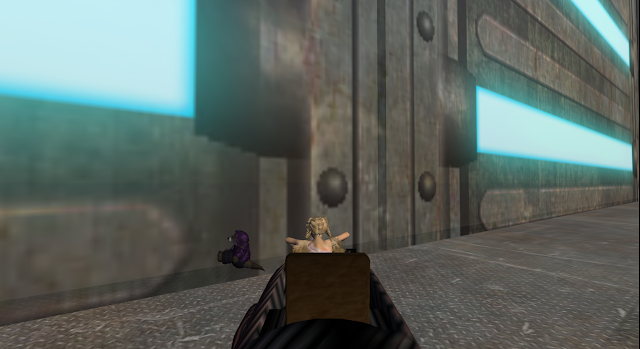 I visited the SL version with

Read more »
Posted by Thirza Ember at 6:11 AM No comments:

The Intergrid Metaverse Arts Biennial isn't just a mouthful, it's also an interesting art project headed by Velazquez Bonetto and Josina Burgess. They want to raise awareness of multimedia art in all grids. They are based in Second life (with a presence on the Metropolis grid) and the IMAB ball rolling with a performance of The Change, a mixture of music, scripted scenes, costumes, particles, and general-mind blowing virtuosity. The show will be repeated each Sunday at 2pm PST on sim Benvolio (SL), so don't worry that you missed the premiere, which was timed to coincide with the centenary of visionary scientist Nicholas Schoffer. More about the opening night on the IMAB home page. 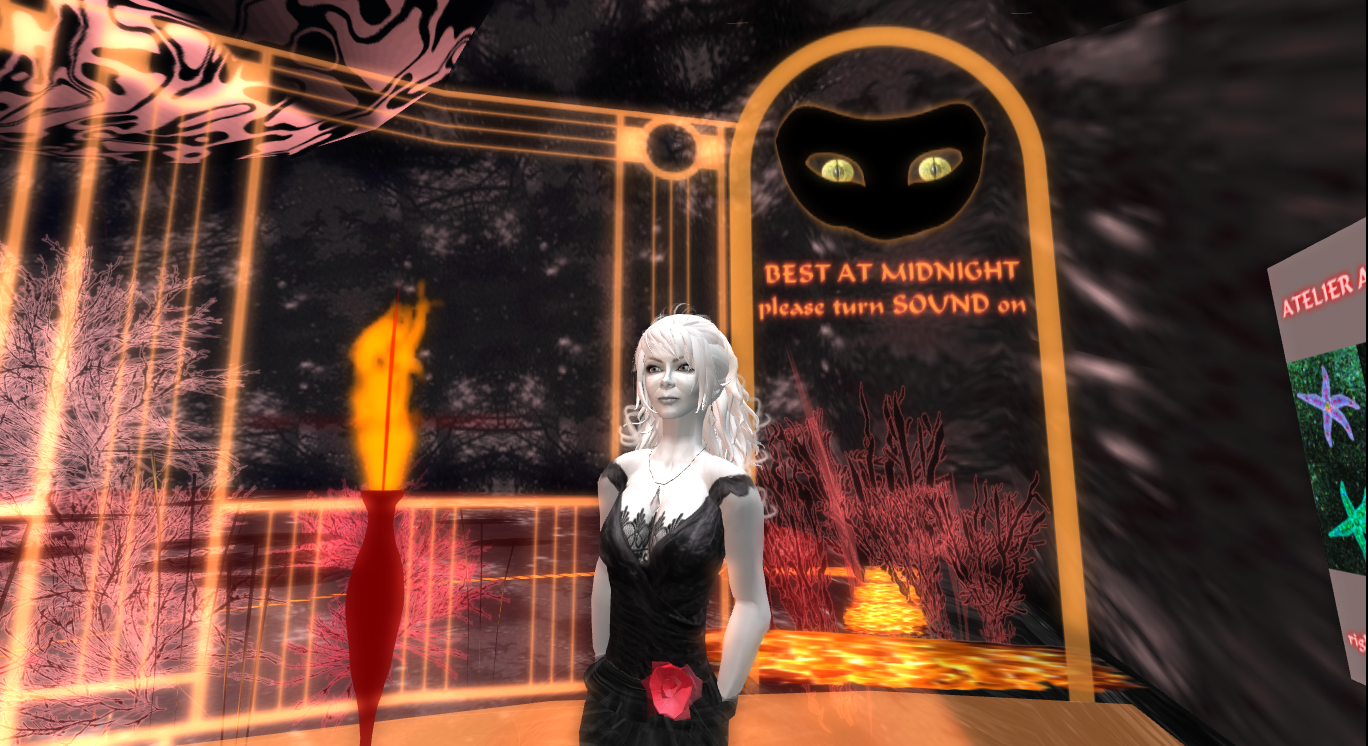 Tonight, the fun continues with

This week the already beautiful Francogrid just got even more beautiful. Terra Mater is now home to Cherry Manga, one of SL's top visual artists. Look in the sidebar for a page of instructions on how to visit, via hypergrid. 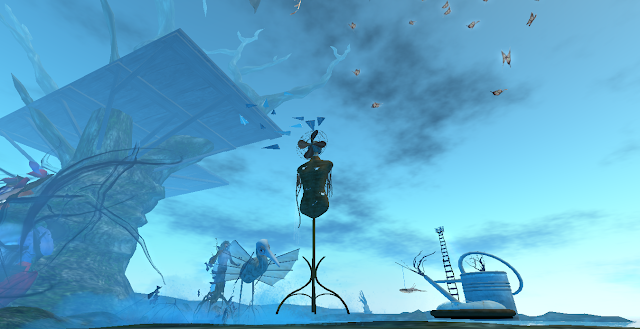 For those of you who still hang out in SL sometimes, never fear, Cherry's store and showcase Mysterious Wave on sim Dark Swamp, a space she shares with fellow artist Anley Piers, is not going anywhere. 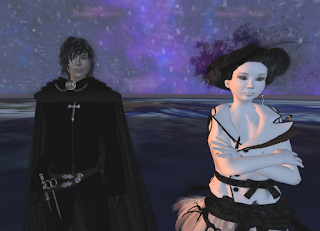 Here in Francogrid, she's sharing with another fine builder and lover of prims, her RL husband, Archael Magic, who she met in SL and married a couple of years ago. After just four days in Francogrid, Cherry and  fellow builder (or, as he prefers, 'cube maker') Archael are cautiously optimistic. This is still 'just a try'. The high prim limit and the free uploads are still delightful novelties. It's a place where both will be able to build side by side, which may slightly ammortise the sense of loneliness that most expats experience when