Safari people can fit a lot into a small space, whether it's time - a bare ninety minutes - or the narrow tunnels of the unusual Andron Rae build, 'The Caves', on Neverworld, our second destination this week.  But before the spelunking, there was the great leap forward, in terms of bag and baggage, as imagined by Ai Austin, who you may have come across on VUE grid, or (as happened to us) encountered him on Space Camp, a Gerry Anderson inspired region on OSGrid.

But before we went anywhere, everyone came to the Clubhouse, which is such a delight, as familiar faces and old friends and new pals all show up. Community organizer  Valibrarian Gregg joined us, I think for the first time, and Prax and Alexina, who were Safari regulars back in the early days came along, as did musician Whirli Placebo, who has played for the Safari many a time, and was this time in off-duty mode.   For the address of the places we visited, look at the end of this post, as usual.
If you're interested in a meet and greet before the Safari, there are generally a few of us at the clubhouse ten or twenty minutes before the event, so drop in early and have a chat. It's a good opportunity to catch up on news, and have a dance too. Limber gridjumpers make less lag, they say. Or maybe I just made that up.

And that's a thing, isn't it. Subjectivity. What makes for a laggy experience, for the individual, for the group, for the place we visit. The difference between hypergridding alone or with one friend, and hypergridding with a big group is so immense that it's tempting not to take advice from experts who have never gone safarying. Just because it's hard to see how they can imagine what we go through.

That is part of the glorious variety of opensim, because every grid we visit is just a little different in its configuration, type and quality of server, style and quantity of objects already on the region we visit, and so on. It's a lot like travelling in the real world, if you think about it. Never underestimate the culture differences between people and places. That puts off the stay-at-home type mentality, and makes me admire always the growing number of brave souls willing to risk it by joining our treks. 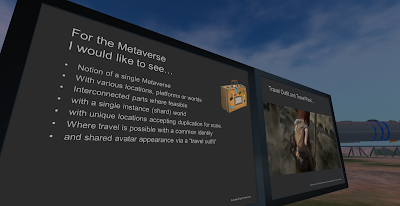 First up, Space City on OSGrid. Ai Austin aka Austin Tate is kinda a big shot in our - what do we want to call it? Metaverse?
I am getting sick of that word being co-opted by rich dufuses, so I may start calling it the Metaprose, because we live in prose, and not in verse. Prosaic everyday community living.                            Ai Austin is Professor Emeritus of Knowledge-Based Systems at the University of Edinburgh, and so he spends his time thinking thoughts about where our virtual worlds are going, and sharing many of them in his Ai Austin blog, which is always good to read.  He's the kind of guy who uses Firestorm Beta, and knows about new features, like the 360 panoramic photo feature, which he used to take this photo, check it out here.
The event ended up being mostly in Voice, but Ai provided the main points of his premise on a Notecard, so that anyone unable to hear or struggling a bit with English was able to read and follow. 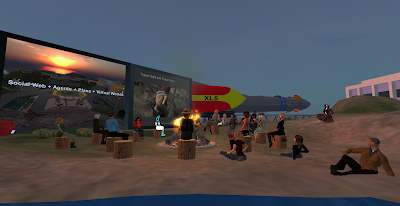 Ai Austin: This visit was prompted when Thirza Ember picked up on a comment I made at the OpenSimulator Community Conference in December 2021 and also in an earlier (2015) blog post about the benefits for the Metaverse concept of thinking of a travel outfit and travel kit or suitcase relevant to your destination. It is aimed at providing an easy to understand overall conceptual framework for Metaverse interoperability within which innovation and implementations can be made. 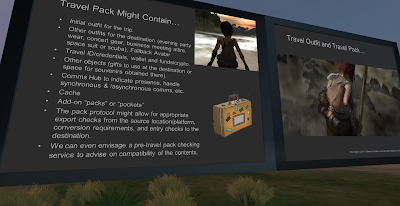 Ai Austin: I have been promoting this idea for some time, including recently at a meeting of the  Open Metaverse Interoperability (OMI) Metaverse Traversal standards group - you can read about that meeting here.   The simple idea could help with taking important aspects of your avatar identity across platforms and offer a target for an open metaverse concept that might be implementable.  It would avoid having to agree common (perhaps lowest denominator) standards to which platforms might try to comply.
Ai Austin:  The idea would be that an avatar appearance/outfit that complied with an interchange format could be worn, and a suitcase, backpack or travel kit attached. This could be checked for permissions and filtered, adapted or converted for technology compliance and permissions when travelling to another platform or part of the Metaverse.
Ai Austin:   We can envisage the travel pack containing one initial outfit worn for the trip and perhaps some other outfits for the destination (evening party wear, business meeting attire, space suit or scuba gear anyone?), travel ID/credentials, travel wallet, and other objects (gifts to use at the destination or space to retain souvenirs obtained there). The pack protocol might allow for appropriate export checks from the source location/platform, conversion requirements, and entry checks to the destination. Ai Austin:  We can even envisage a pre-travel pack checking service to advise on compatibility of the contents and allow adjustments to be made prior to travel. Some platforms might provide a "Metaverse Portal" area to which local avatars travel and which can have technology or web services links to assist the avatar in preparing their appearance and/or travel pack prior to making the jump.
There were applause at the end of the talk, and much discussion followed, with people making some good points about blockchain, lost hair, paranoia, unmentionables, and more.
Kelso Uxlay: Nice concept
Beth Ghostraven: this concept goes way beyond what I thought you were going to be talking about :o)  maybe this is a stupid question, but - how does this differ from manually using the My Suitcase in Open Sim?
thirza ember: Beth, I think it is exponentially different, because you can go to completely different worlds, one would hope
whirli placebo: what about data harvesting as it relates to the contents of the backpacks?
Lucy Afarensis: Could you go to world of warcraft ?
Truelie Telling: very interesting!
Alan Scot: doesn't all this require some kind of International Org as a Central SECURE  Repository for ALL digital assets ?   ELSE Linden will ban ALL imports of assets  for instance ?
thirza ember: just taking a moment to enjoy that there are academics and scientists in opensim who are trying to help us evolve. We need people who are thinkers to show that OpenSim is a serious place
Nara.Nook: yes
Use this link to obtain all the resources connected to this presentation, and to see some pretty cool photos connected to Ai Austin's work at VUE, the Virtual University of Edinburgh. Food for thought!
Next up, a trip to Neverworld Grid. This is the home of Govega Sachertorte and Locked Semaphore, and many more. Our visit today was to a very special build called The Caves. It's beautiful and poignant and also interesting from a technical/aesthetic reason, because we all know that cams and tunnels do not really go together. Yet builder Andron Rae has made it work here, and in the most magnificent way.
Some of us couldn't directly jump from Space City to The Caves, I noticed this glitch all week, something going on in the intertubes between OSGrid and NVW, so I had added in the LM Pack a second LM to the Neverworld landing area, and that seemed to work for everyone who was unable to Verify Identity when they tried the direct tp.  A special shoutout goes to all those who have been trying to make an effort to lessen lag by having much less complex avatars. Here is Arcanquest Frank is a heroically retro avie,  although I'm honestly not sure how much we help or hurt with all our efforts.
Neverworld Grid owner Govega was totally unafraid of lag, her avie had a complexity of over 400,000 and indeed the region seemed to shrug us off.  There was a brief moment of crisis when all 25 of us arrived on The Caves, to be greeted by Govega, Joshua 7, Alba Wyrril, and Oliver Grashnar (not to mention Franco Thirza who got jammed in the corner by some barrels of what she hoped was brandy and, on reflection, was probably gunpowder).
Andron has prepared a walkthrough of the build, which is available on Youtube here. 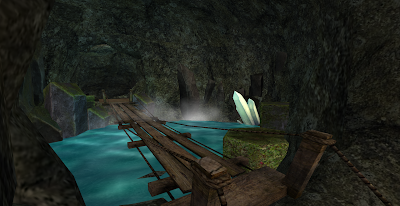 The build involves following a trail and reading the notecards, but it's not a hunt as much as a meditation on life and love and beauty and creativity, a stream of consciousness accompanying you on your journey. Wherever you see a glowing spark, there you will find a notecard.
One of the coolest parts of the build, that you may miss if your volume is low, are the sound effects, like the splash when you fall off a bridge into a rock pool. The route is pretty easy to follow, though being a big group who wanted to stick together as much as possible, there was a fair bit of TPing - thankfully point-to-point TPs are enabled here, and that saved us all a great deal of frustration.
The heart of the build is a sort of cavern - or is it open to the sky? I don't think I checked - where you will find an incredibly beautiful ring of singing stones, set in a glade full of soft green foliage. Nearby a beautiful statue nestles in a watery corner. It is captivating, and had us all standing quietly, just enjoying the place and the moment.  The build is dedicated to the memory of the late Pasha Theas, who was one of the earliest members of Neverworld, and the partner of Andron Rae. She was a talented builder and her creations can still be seen in many parts of the grid, including the Welcome Center.
Thirza Ember: there is a gift at the end, if you do not find it, let me know, I will pass it to you, Andron wanted all to have it
Alan Scot: got a "Conclusion" notecard but no gift, what was the gift ?
Oliver Grashnar: that's an interesting structure, so much up and down I didn't know fully where I was going
Lifted Pixel: I met a ghost dog
Dabici Straulino: very nice, I love the sound installation - fountain and crystal. Thank you for the visit, this is a great work
Kelso Uxlay: Nice sounds
James Atlloud: So great to have audio effects in the experience!
George Equus: Very impressive build!
Addresses:
Space City by Ai Austin          hg.osgrid.org:80:Space City
The Caves by Andron Rae      hg.neverworldgrid.com:8002:The Caves