Safari goes to the Docks

This week, two Beatles related builds! One recreating Liverpool Docks, and the other recreating all the joy of the Yellow Submarine. Both exploring a time long, long before you or I were born, naturally. Liverpool is a city with a rich, sometimes troubled history. A port city from the beginning of the 1700s, the ships that plied the Transatlantic routes carried all sorts, manufactured European goods, American cotton, tobacco, sugar, and people - immigrants, but also slaves. The famous Penny Lane immortalized by the Beatles is named after James Penny, described by some as a slave merchant, although the jury is still out on that. One thing that is without a doubt is that the Beatles are Liverpool's number one export, the pride and joy of the city. A huge Beatles museum is located a converted warehouse building on Albert Dock.

We start with a truly amazing trip to Kitely, and the Old Liverpool Dock. This region is normally closed to the public, so our visit was a little bit of HG heaven, and our host Graham Mills has done a

magnificent job of bringing to life a time when the city was all about sails and sales. 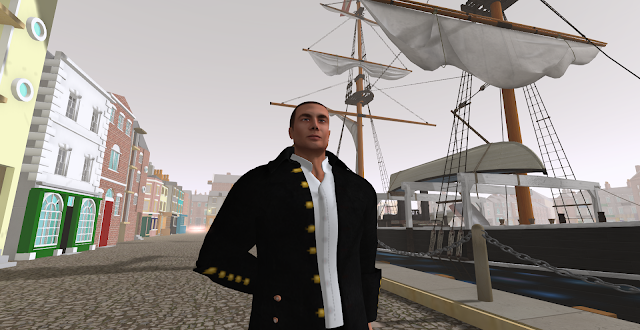 Graham Mills: Opened in 1715 the dock was the world's first commercial wet dock, meaning that it had lock gates to retain water at low tide so ships could be unloaded irrespective of tide or wind. It was the foundation of Liverpool's docklands and prosperity which probably peaked in the late 19th century when 9% of world trade flowed through the port. However, it also enabled the trade in enslaved persons which made a significant contribution to Liverpool's economy before its abolition in 1807. Traffic in slave produced sugar and cotton continued for a long time thereafter. 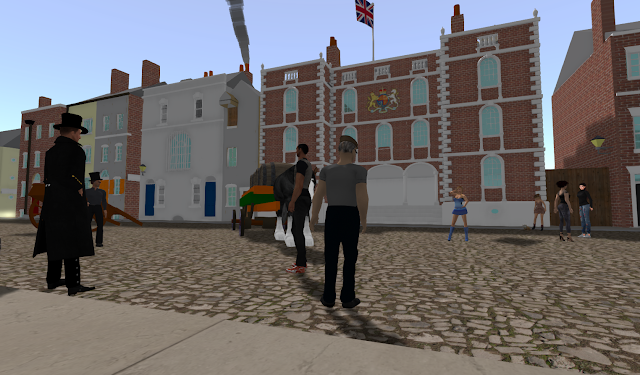 Graham Mills:  We are standing in front of the Custom House which was, of course, a very important source of government revenue.  Opened in 1726 it continued in use after the dock itself closed as its massive replacement located on the in-filled dock took 13 years to build! I should say that the build is very much a work-in-progress and not normally open to visitors. If you touch the mooring post with the white band you can obtain a notecard with additional background info. The menu can be used to dispatch a ship but please do this sparingly as it will add substantially to lag.
Thirza Ember: oh someone dispatch a ship! 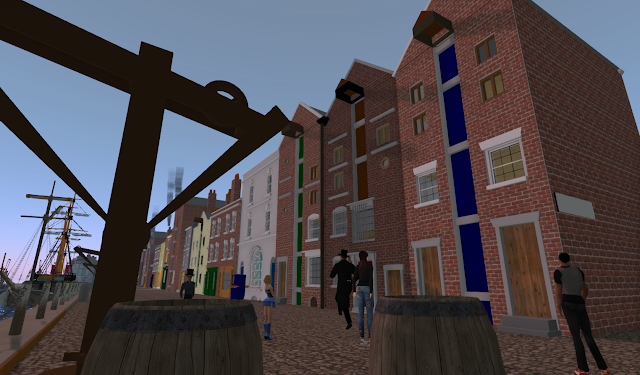 Graham Mills: The build is currently a 3x3 region based on Horwood's map of 1803, ie nearly 90 years after the dock opened.  The appearance of the east end of the dock (where we are now) is based on images mostly dating to 1828 by which time the dock had closed. Much of the remainder is imagined. Although none of the buildings around the dock have survived, the walls of the dock itself have latterly been excavated and can be visited in present-day Liverpool
James Atlloud: it's such a great illustration of the growth of an economy
Graham Mills: it was by equal measures a remarkable and terrible time Graham Mills: This corner of the dock still exists and can be visited. While the dock was ultimately a success, none of the other docks were built in this way. The dock was built in an inlet so involved significant land reclamation.
James Atlloud: cool that still exists.
Graham Mills: The corner warehouse here is #30. In 1803 it sold pottery and beer in bulk made in Staffordshire about 100 miles away and brought to Liverpool by canal and then up the River Mersey to the dock. However, in September 1790 it was the location of the second ever US consulate, the first being in Canton (now Guangzhou). The consul, James Maury, was a merchant and this was his warehouse and counting-house (office) combined. It quite quickly relocated to nearby Paradise Street at the bottom of the street to the right. The building with the sedan chair outside was the counting-house of Joseph Ward, a trader in enslaved persons, known in those days as an Africa merchant. He had also been a captain of a slave ship as had his brother. These people were seriously wealthy -- country estates etc Graham Mills: The alley on the right is called Crooked Lane and it survived relatively unchanged until the 1970s. It originally had a sugar refinery which was owned in 1803 by Jonas Bold. It's an area I want to develop further.
Thirza Ember: seems like people kept very good records, even at a time when industrial history was not considered very important
Graham Mills: Liverpool was founded on Sugar and salt -- cotton followed later
James Atlloud: sugar and salt from where?
Graham Mills: sugar from the west indies, salt exported from Cheshire v important for preservation
Thirza Ember: sugar, salt, coffee, the three main food groups
Graham Mills: tobacco as well
Thirza Ember: oh right, vitamins Graham Mills:  Dicas & Co were makers of scientific instruments. Their patent hydrometer was the US standard for measuring alcohol content for 60 years. By 1803 the business was ran by Mary Dicas who also made a projection orrery to demonstrate the motion of the planets during lectures. - amazing really, early planetarium
Lux Tergeste: a woman scientist :)
Graham Mills: nods
James Atlloud: oh, and an orrery!
Thirza Ember: You know what they say, behind every good planet, there is a woman winding it up
Graham Mills: Here we pass Old Strand Street, so-named as it was once on the shoreline. As with Pool Lane which we passed earlier, it was a major route for traffic headed to the dock.

Graham Mills: so we have the dock gates and bridge
James Atlloud: the lock channel seems so narrow!
Graham Mills: that's why they closed it. 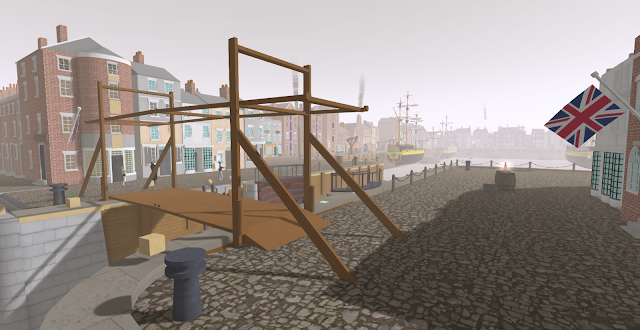 Graham Mills: The building at the end with the flag was the office for the graving docks but in 1803 it was probably also either a coffee house or a tavern. The owner was George Mackenzie. It also housed a shoemaker. It had previously been the home of William Hutchinson, a former privateer who became Dock Master and compiled an early set of tide records from which tide predictions were made.  He also introduced concave reflectors for lighthouse lamps as well as forming one of the earliest lifeboat stations. The dock beyond is the so-called Dry Dock as it had no gates and hence it was mainly used by small ships that could safely be allowed to settle on the bottom.
Lux Tergeste: Was the canal closed to keep the water deep inside the dock?
Graham Mills: yes Lux
Thirza Ember: whew you say it's a work in progress, what do you want to add?
Graham Mills:  people, more ships, interiors
James Atlloud: Did you say that there was a simulation of the tide here?
Graham Mills: yes but that needs the prim water which I've removed temporarily - needs parcel-level control of water height which isn't a thing
James Atlloud: Ah ok.  Another designer was hoping to simulate tides, but OS doesn't support that.  It would be very cool.

Graham Mills: sadly a lot of people did drown here
Lux.Tergeste: Did they keep a record of that too?
Graham Mills: across the channel were a bunch of taverns, people drank too much and it was dark
Lux Tergeste: Oh... that was on Friday nights then!
James Atlloud: i can see that.. lol (or they couldn't)!
Graham Mills: that's why they put the chains up (usually). The edge was more flush than i have it here.
Lux Tergeste: no parapets, as in Venice
Neo Leos: But in Venice water is not that deep :)
Lux.Tergeste: Marlu can tell us, she is from Venice!
Thirza Ember: Frank don't jump! it's not worth it!
Graham Mills: there was a bounty for the recovery of drowned persons
Thirza.Ember: in that case, frank, go ahead and jump, I could use the money (Don't worry, I'm pretty sure his hat is a floatation device)
James Atlloud: lol
Graham Mills: I don't know if you have time but there is a boat rezzer, grab an oar and touch the boat, then rightclick and ROW - good luck :)
Mal Burns: land ahoy methinks

Thirza Ember: wow good rowing by Ard
Graham Mills: shouts: Watch out for the ship
Ard Rhys: fun tour of the dock
Graham Mills: haha -- a bit of fun to end on

Lux Tergeste: Loved it, Graham! I also remember your old train project. Manchester, was it? That was a couple of years back, maybe more. Really impressive, I wish my students could see it
Graham Mills: nods, Liverpool & Manchester
Ard Rhys: Yes, great visit. Thanks, Graham
Graham Mills: hope nobody drowned
Thirza Ember: only Frank, but we can always revive him with grog
Mal Burns: glug glug splutters
James Atlloud: I survived!
Graham Mills: heh, well done all :)

Lux Tergeste: Thank you for opening the sim for us
James Atlloud: So much work represented here.  amazing!
humbletim metaverse: thanks graham!
Marlu Nic: Thank you Graham!
Neo Leos: Ok finally I've been able to join a tour! Interesting the setup of the harbour over the ancienbt map :)
Graham Mills: nice seeing you, yes, fun detective work. Bye everyone and thanks for the visit :) 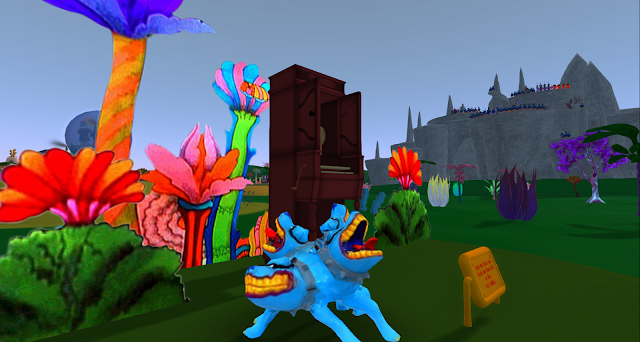 Then off we went to Pepperland.
This signature build by Mudpuddle Cleanslate is a celebration of the movie Yellow Submarine, and comprises a pair of regions, one showing the land-based scenes from the famous animated movie, the other (Pepperland II) dedicateed to the underwater part of the action, as shown here.

Mud has cleverly rendered in 3 D the 2D drawings of stylized people, fantastic animals and improbably exotic plants, as well as surreal elements like the pointing hand that flies like a rocket around the region.

Mudpuddle has a bunch of excellent videos of his builds on his channel, this one of Pepperland is my favorite, it catches lots of aspects of the build that are easy to overlook.

Thirza Ember: if you don't know the story, this site is a good source https://www.reelstreets.com/films/yellow-submarine/

Lux Tergeste: My daughters would watch it again and again
Thirza.Ember: maybe Lux can tell us about the film and why is it still such a favourite
Lux Tergeste: Well, it is a bit visually nonsensical, and a good many years have gone by, unfortunately - somebody was chasing the submarine, if I remember well

Speaking of Submarines, apart from the one on top of the pyramid, there's a much larger, visitable version of the craft up in the sky, at about 100m.

Nara Nook: this is cool :)
Marlu Nic: I am enchanted
Thirza Ember: ok what is your  favorite Beatles song?
Mal Burns: can't possibly anwser that one
James Atlloud: 'Day in the life'
Nara Nook: Paperback Writer
That was when we all crashed. Oh it's easy to say a script did it, or read into it all that Vivox/FS voodoo. Much easier to blame Chester the animesh cat who, having made a dozen teleports in less time than it takes to clean out a litter tray, decided to go ahead and bork me. Thanks to the great Nara Malone for catching the moment for posterity!

HG Addresses
Liverpool Old Dock (Kitely), by Graham Mills,  is not open to the public.
Pepperland by Mudpuddle Cleanslate           lfgrid.com:8002:Pepperland
Posted by Thirza Ember at 4:48 AM