Havoc Rau is an unmissable figure. Tall, with dark good looks and impeccable manners. He has his own city, and knows about mesh, heck, he makes the stuff (free for us opensimmers, for money to those unenlightennd types in SL who don't know about the Free Worlds). He is, to me, a hypergrid hero, a man who spans the gap between complicated role playing and HG Tourism. 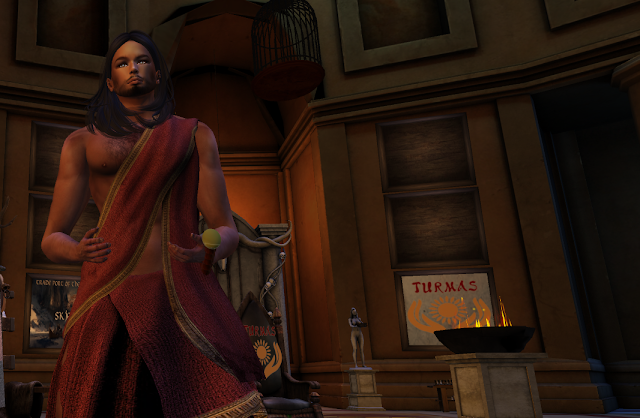 A couple of weeks back he came to save me from the Zombies on OSGrid, as you may have read in an earlier post. This week, he offered to show me his etchings, I mean his tarns, on CounterEarth. What could a girl say, except for 'yes please'?

CounterEarth, if you didn't know, is an amazingly beautiful grid that takes its theme from the novels by John Norman, who began writing them in the 1960s. (The grid address is at the end of this post.)Here is a pretty unbiased review of the first novel to give you an idea of what it is all about. The grid, on the other hand, has to be seen to be believed, and believe me, it's the tops.

Thirza Ember: how long have you been in Counterearth, and what brought you here?

Havoc Rau:  I was one of the founders, 4 of us. We were on OSgrid and had a number of sims there, but I am sure you remember when osgrid crashed for, what, 8 months? When that occurred we realized we could do our own grid, we were all old school goreans and realized it was really an opportunity to do Gor right, as we saw it. So first we made Turia, some 12 or so var sims. We soon realized we could open the doors to others. That was 7 and a half years ago. As you see by the board there we have many cities now and many people - over 2700 registrations to date, of course they are not all active. We try to stay true to the books as well in our designs and builds. Gor is made up of many cultures but mostly Greco roman origins, and you may have noticed this building is based on the Parthenon. 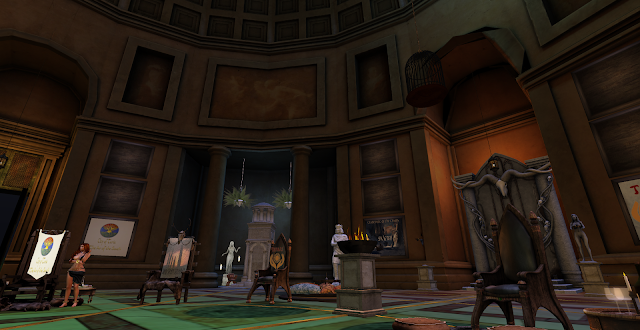 With so many really detailed regions on the grid, I wondered if everyone here is a builder.

Havoc Rau: no, not everyone but we do have many, and like everyone we scan the metaverse for content. This building is one of those we were lucky to find and builder shared. But we also have a lot of original content of course.

Havoc, who has a RL background in 3D modeling, still sells many of his creations in SL, but most of the things he makes are free, for people in opensim. He started out in virtual worlds like the rest of us, simply as a player. Building inworld was something of an epiphany for him.

Havoc Rau: I kind of fell into it when I realized that prims were basically just solid modeling, and mesh is basically surface modeling. Sardar Fair, one of the oldest Freebie regions on the hypergrid, is right next to the grid's main Landing area, and it's worth a tour for the many cool items of furniture, clothes, and more that are on offer. The latest version of the fair is set out as a series of colorful tents, you should definitely take a look. The Gorean culture of CounterEarth, a planet imagined to be on the same orbit as the earth but exactly opposite, so that is it always hidden from us by the sun, has had its detractors over the years. It imagines a civilization similar to Earth's Middle Ages with some sci-fi or fantasy elements, and a very distinct vibe, particularly with regard to the portrayal of female slavery.

Havoc Rau: Gor has a bad rep, mostly due to untruths and a few idiots who were not really Gorean, so to help with that, we are going to be doing a seminar series here, "what is Gor". Speakers will be long time players each will have 5 minutes to explain how they see it and, we hope, this will spread more truth about what gor is.

We moved on to Havoc's own city. 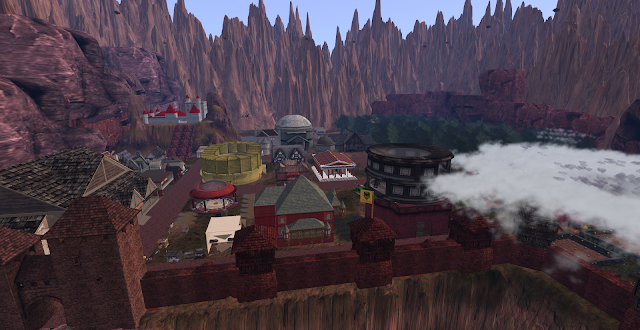 Havoc Rau: Tarnburg is a city high up in the Voltai (RED) Mountains. We are a walled city of course, like most gorean cities. Along with the city, we also have an extensive farm system. It is based on SF Farm but modified to gorean plants and such. 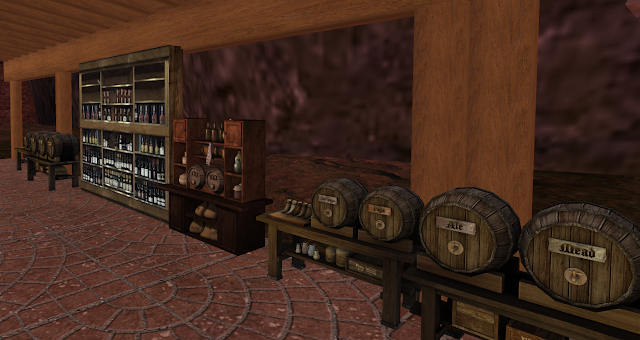 The great market just inside the city gates has all kinds of merchants who call out as you walk by, bringing the place to life. A big tavern with a good supply of booze is always a plus. Mine's a mead, and make it a double. 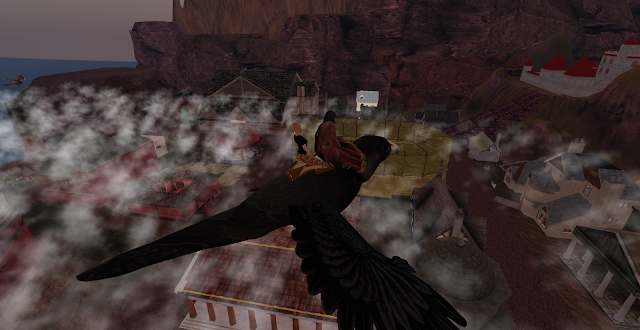 The real fun began though when Havoc suggested a flight over the city on one of the giant birds that are so central to the gorean story. These work with physics so they move really fast, with lots of handbrake turns around the rooftops. 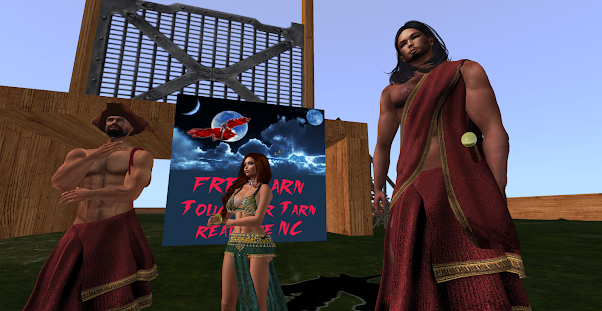 From Tarnburg, to the Tarn stadium, where it's possible to race birds without running into a cliff face. Lionheart Gor and Kindra Turian joined us at the starting gate, and invited me to try my hand at flying solo. 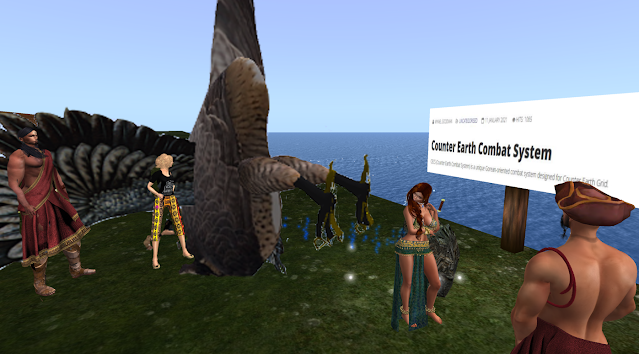 This was of course not a good idea. My poor tarn was airborne for only half a minute, before it plunged to earth (or should I say Counter earth) and expired. The Goreans were too nice to laugh, or maybe they were doing so in Voice. This is why I like Local Chat so much.

Havoc showed me how the races is supposed to be run, or flown. It kind of reminded me of Quiddich, with the rings, which we got through, if not in record time, at least without killing the Tarn.

Thirza.Ember: Lion, a question for you, what do you consider is the best part of CounterEarth, after all these years of work and community? 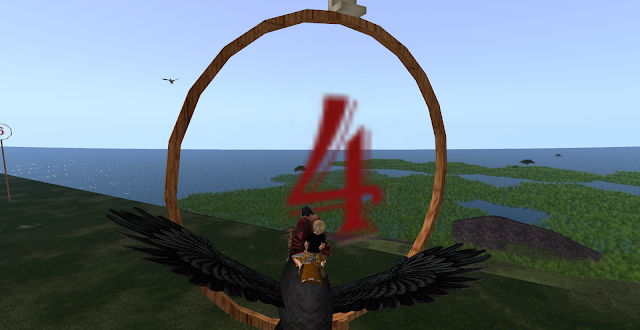 LionHeart Gor: That's a tough question because we have a lot of great builds here, many of which have been evolving and growing for years. That's the neatest thing about being part of this grid; it's constantly growing, adapting, changing. What was a plain space last year, might be an amazing forest and river this year, as people voice what they'd like to see and play in. Each of us tends to be partial to the cities and towns that we have personally  had a hand in creating, too ;) , so there's a bit of bias

Havoc Rau: as well as bias based on our favorite books in the series, etc.,  so there is something for everyone

Thirza.Ember: it's not a grid, it's a whole planet you have here

Havoc Rau: and lots of ocean to sail, and the boats to do so

Thirza.Ember: so, if someone wants to come and explore, is that ok with you? obviously showing respect for the culture. Or is it better they join the grid, from your point of view? 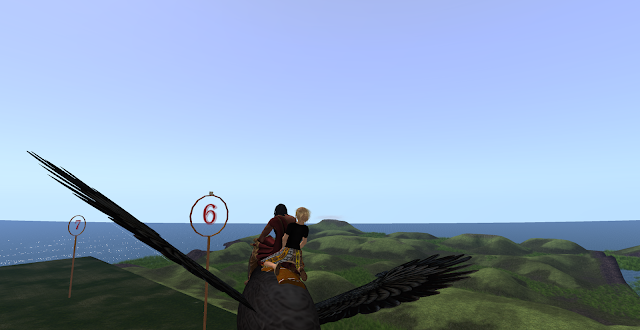 LionHeart Gor: Ah. The type of welcome depends on the sim being visited. Each 'city' or island is owned by the person paying for it, and they have the right to set their own rules there

Havoc Rau: well from my point of view, joining is always better for many reasons, but to look around first is fine

kindra Turian: yes it is- one thing I love that we do is we help new Goreans learn about Gor via the John Norman books or discussion groups we have had. 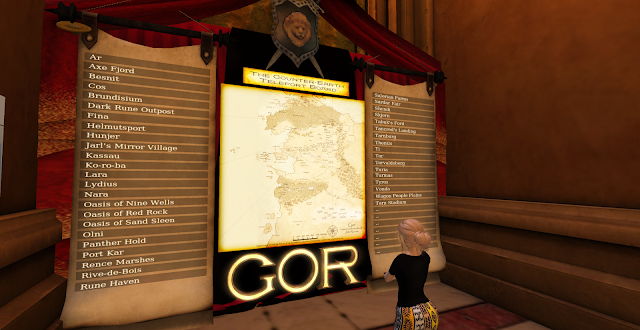 LionHeart Gor: Joining the grid is MUCH better, I think. That way you have free roam across the connectors as well.

kindra Turian: there is so much knowledge here as we have so many really experienced people here. We have close to 40 active cities here all of which are looking for new people

LionHeart Gor: Definitely. Folks are always looking for new roleplayers who want to join them and build a story together

Thirza.Ember: the thing which is super cool here,  with the same avie that does role play, you can slip out into the hyperverse and do other things, and that I would say is unique

Havoc Rau: indeed it is, they can go kill zombies for instance ;)

kindra Turian: the other thing too if you think about it - we can do things in open sim that aren't available on paid for product sims and grids. For example - if you wanted to have a huge event that takes place in a specially designed area with specially designed costuming- it's free here, it's not free on SL, you have to buy the costumes and pay for a sim to design...

Thirza.Ember: so really you offer the best of both worlds, an immersive grid, with a door into other worlds, and without spending a fortune.

LionHeart Gor: Indeed. Comparing prices between OpenSim and SL, makes it seems crazy to be in SL unless you're wealthy

kindra Turian: Thirza it was so great to see you again and thank you for thinking of us - we have just celebrated our 7  year anniversary as a grid and that is something in this day and age to be proud of!