Come Fly With Me

This week's Safari was something of a time-travel trip of the mind as we visited two very different imaginings.  First on Kitely, at the International Spaceflight Museum where we saw the optimistic imagined future of colonizing Mars, and secondly, an imaginative past of empires and honor, on the grid CounterEarth. HG Addresses, as always, are at the end of the post. 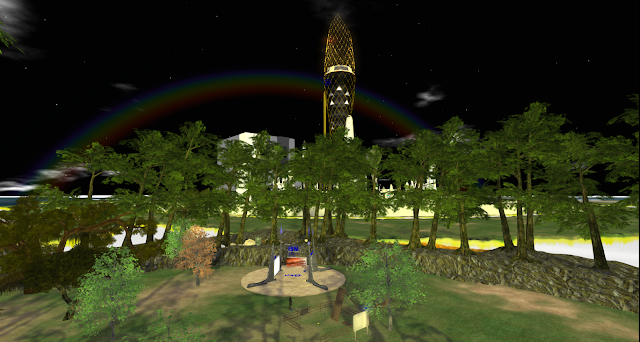 I love ISM on Kitely, there is a stateliness and grandeur about the region.  A veritable forest of rockets dominate the Museum Ring part of the build, with ships, satellites and rockets from all over the world. 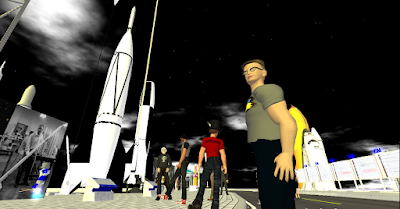 The creators here include Kelly Bucklaew and Asterion Coen with smaller contributions by Samuel Greenway,  Ai Austin, and Miguel Rotunno, but the lion's share of the building is all down to the man himself, Mike Lorrey.
Mike showed up legless (but not in a bad way) at the teleport hub on the ISMuseum region, which had been transformed into special greeting area 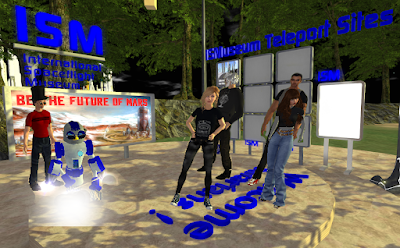 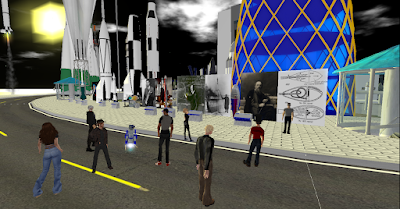 He whisked us away to the museum ring and gave a really fascinating explanation of the early days of space flight. Whether you're a space junkie or even if you're fairly indifferent to the subject, this is a really worthwhile visit from a cultural, historical, and aesthetic point of view. 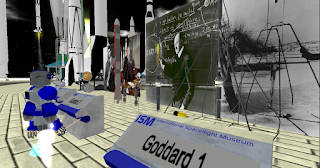 So much information here, and presented in a format that has both grace and depth. The photos are spot on, and when you click on them, they give you that little bit more info, without overwhelming you.
Mike led us along, recounting the stories of a bunch of pioneers in spaceflight, illustrating his points in 2D and 3D as we followed him around the ring, with the added bonus that those who wanted to could fly up and take a really good look at some of the rockets, Walking around in virtual allows you to feel how huge these craft are, yet at the same time realize how fragile man's efforts are, and how risky.
Our time is always limited, on Safari because there's always a lot of waiting around for everyone to catch up, or toggling one thing or another, so long before we had seen all the museum has to offer, it was time to jump up to the Mars platform, which is about 100m in the sky.

The idea is to use this immersive virtual environment to train people how to move about and work on Mars. 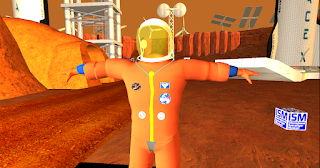 The whole thing has to be thought out - or should I say has and is being thought out - in great detail, since the volunteers  going up into space will be in the hundreds, rather than the current handful of highly specialized astronauts. Gravity, atmosphere, temperature and generally everything on the red planet are different enough from our own that serious pre-training will be needed for all the people who will be needed to operate and monitor the systems necessary to make Mars human-friendly.
Mike showed us all the various ways the Mars Colonists would modify the planet to make it human friendly. There's a lot to do.
Mike Lorrey: These are sabatier  units they convert water and CO2 into LOX, LH2 and liquid methane - just add electricity/  This is the industrial scale model, still school-simplified.  Yellow tank  over here is the yellow CO2 tank,  on top of it is a turbo compressor that compresses CO2 from the martian atmosphere into liquid form at 30 atmospheres pressure. Then, there's the  Green tank. The green tank is LH2 made from water. You mix them in the chamber in between. It has a pebble bed of catalytic metals
and a big induction  coil to heat it up, like the catalytic converter in your car. It bakes it into H20 and CH4 ...mixes CO2 and LH2... out comes H2O and CH4 from the top, it goes through a cooler condenser. Then you have the Pink  tank. The H2O condenses into liquid form in the pink tank,
then the remaining gaseous CH4 goes thru another condenser to become a liquid in the orange tank where it is electrolyzed into H2 and O2/ In the blue tank, the O2 becomes LOX and in the green tank the H2 becomes LH2 back in the green tank, and the process continues. The LOX and CH4 become Starship fuel. 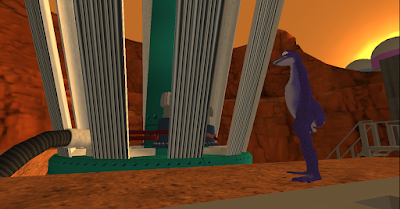 And then just like that we had been there an hour and it was time to wind it up. A fascinating place everyone should visit, and Mike's enthusiasm and dedication are infectious, so if you're lucky enough to have him give you the tour, jump at the chance!

More flight on our second destination, on CounterEarth, a grid that brings alive a series of John Norman books that explore in vivid and complex detail a planet that is exactly opposite earth, on the other side of the sun, so that we here can never see it, yet its civilizations mirror and mimic ours. 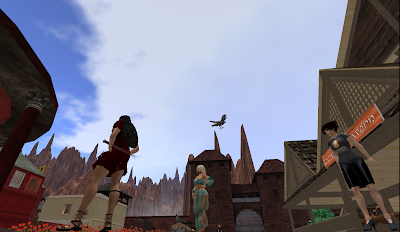 We went there to fly Tarns, huge, domesticated birds. The Counterearth Tarn Stadium is a bullet sim, allowing you to fly at speed, and the idea of the competition is to complete a series of circles and fly through numbered rings, the one with the fastest time wins. 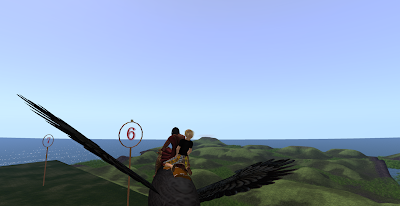 The birds take two passengers, which is just as well because my tarn killing track record is pretty impressive. This time I was lucky enough to ride with Nara,

Nara's speed and dexterity in flying the Tarn had the whole crowd whooping for joy. Ok I'm lying about that part but at least she didn't crash the poor thing head first into the ground. We learned a bit about the history of the grid.
Havoc Rau:  Started in SL, didn't much like it so went to OSGRID. When OSGRID crashed, and stayed down, for like 7 months, we created our own grid, but only for one city. Then, shortly after, we decided to open it up to other gorean cities. That was 7 and half years ago now we are about 25 cities and villages
Thirza Ember: l think Sardar Fair was the first freebie store I found on the hypergrid
Havoc Rau: yes we are an old one ;), and constant as well, unlike many who come and go, especially as a themed grid 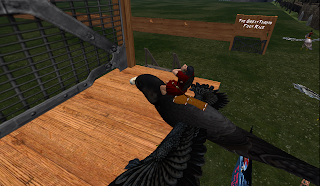 kaela bella: I think Gor sort of helps for rp since it gives a ton of context for rp.
Havoc Rau: aye with 36 books we have a lot to work with
Nara Nook: all by one author?  I just thought the books were written across a long time span, like 3 decades but not certain, I  wondered if they had taken new authors in
Havoc Rau: yes though some argue it is by more then one, but they are published as one author
kaela bella: I admit I have only read about 8 or so...but also plenty to find online in order to keep things authentic
kindra Turian: the most recent one highlights the Pani people which are like the Asian people of the world - Our sims here really role play it well here so if you are interested - Nara, it is a great community. We have a dance troupe here and girls dance before events and we have our Holiday Dance Show - everyone can attend that no matter where they are here is a link if you are interested in watching some of it https://www.youtube.com/watch?v=xraeiQleKkU&t=898s
kaela bella: when i first started doing rp on sl, i sort of gravitated to gor since it helped me since i could find the context for it, instead of it being random
kindra Turian: We have a Gorean University in our city of Turia, if you are interested in learning more about Gor please visit there and go to the library 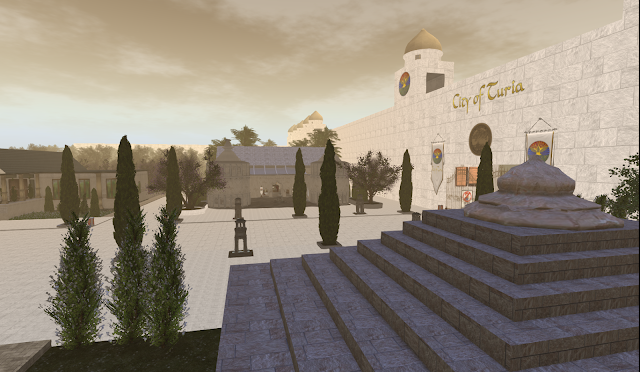 Havoc Rau: it is based on earth cultures, most agree the city of Ar is roman, Tarnburg Germanic, Turia is Constantinople, and the north, or Tovaldsland, is Viking etc.
RSVP Turian: Since Gor is based on the natural order, slavery, especially female slavery is part of the economy of Gor
Shayna Savira: commerce, yes of course,,, someone had to do all the hard work... chuckles
Havoc Rau: indeed, on gor slavery, on the roman model, exists as well, that is why many of the girls here are dressed as they are, whereas the free women wear a lot more.
RSVP Turian: Personally, I think Gor is akin to religion in that there are many ways to interpret things But for me, Gor is similar to the Legend of King Arthur in that you have codes of Conduct , Honor and Chivalry 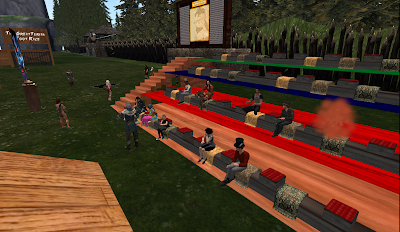 thirza ember: I know that gor has a bad name for many, how do you deal with that?
Havoc Rau: Sl did a lot of that, the bad name part here we take gor more as written, and that is a large part of why we left sl actually
RSVP Turian: Thirza, some people will never give you a chance.  They hear something negative second or third hand and decide it is fact.  I think people should decide for themselves, and if people will take a little time to come and speak to us about it, while they may not have an interest in Gor, I think most realize that we are not the deviants that some who could not cut it claim
kaela bella: that's a good question, and some of my friends get on me for going to gor...but it has its charms as a guilty pleasure....hah

There is much more to see on the grid, and they welcome visitors, so don't feel like you'll be chased out of the place if Gor is not your thing, though the usual standards of guest behavior are expected. 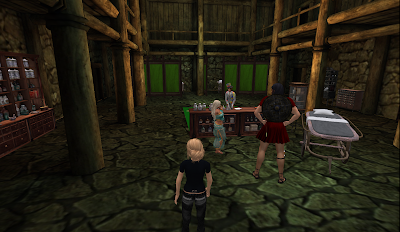 Havoc and angelssabre kajira, who is actually a slave girl in the rp, took a few of us around Havoc's city of Tarnburg, named after the famous birds. High in the Volatai Mountains,  it's a very interesting and lively place, from the market with its merchants, to the Infirmary, run by the Physician Caste. It shows that Counterearth has a far more sophisticated side than Medieval or Dark Age Earth.

Havoc Rau: though Gor is a primitive society in many ways, in some it is highly advanced, medicine is one of them, far more advanced then earth medicine. Gor technology is strictly controlled by the "priest kings" which is actually an alien race who created the planet.

Finally we wound up outside the library in Tarnburg, where you can learn much more about the mores and history of Gor. Serious play for dedicated inhabitants.

What incredible flights of fancy Opensim offers. I hope you agree.