Not one of these deserves the praise
That welcomer of new-born days,
A breakfast, merits; ever giving
Cheerful notice we are living
Mary Lamb 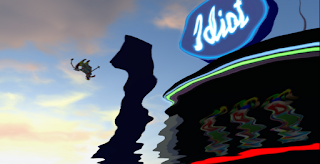 Is it a fish, is it a bird, is it a refrigerator? You decide - on the Cornflakes region of Osgrid, located also inside the brain of the grid's zaniest (and nicest) Swede, Cornflakes Woodcock. 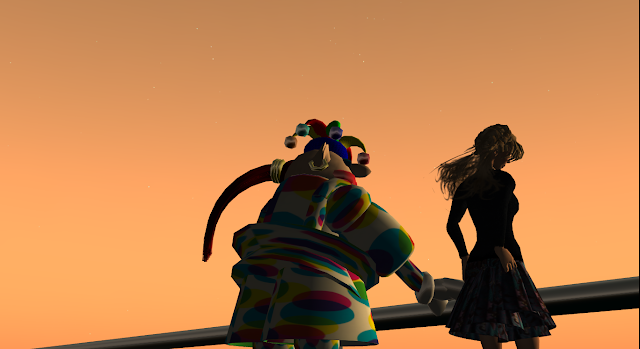 The region is carpeted in a red and blue nylon twill that conveys both safety and severity. It's a minimalist landscape graced by - what to call them? Cornflakes steers clear of any pompous noun for what he does, falling back on terms like 'thingies' and 'stuffies' to describe his output.
Toys or models seems the most appropriate way to describe them, a plastic fantastic collection of playthings. Even the man himself seems like a doll of sorts.
Cornflakes Woodcock: Cornflakes? Oh, he reflects my personality. Never liked the idea of making me a Ken doll. Garry [Beaumont] is complaining about my carpet used on the sim, he says it give him a hard time seeing. I told him that I use the same pattern on the inside of my skull to make it even. 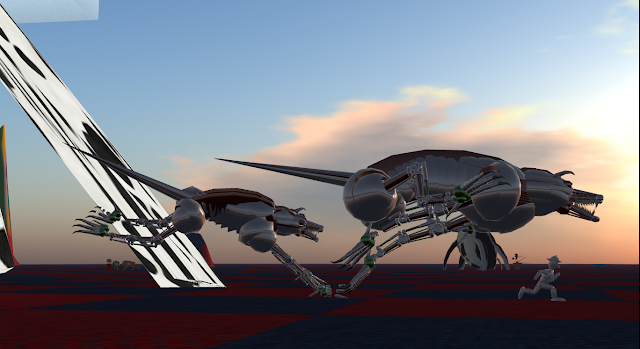 Crank up your draw distance to take it all in. Cornflakes' region runs smooth as silk; that's one of the advantage of running sims on your own server. Another is the complete control you have over things like inventory. No nerdy fingers experimenting with 'cleaning up' the grid and losing all your treasures. After starting in Second Life in 2007, he came over to Osgrid in 2010, drawn by the prospect of space, and the desire to escape the reality-bound commercialism of the grid. Although he defines himself as a bit of a lone wolf, his region included a Sandbox from the start. 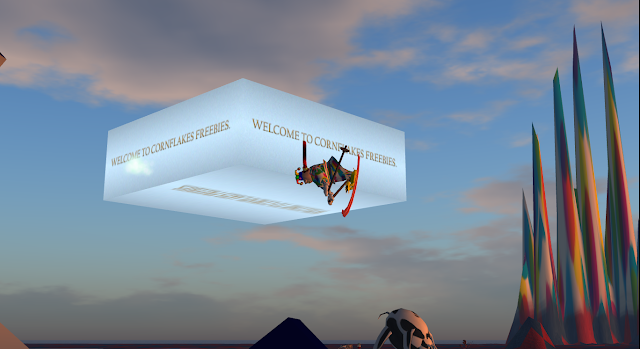 Cornflakes Woodcock: What I was attracted to here is the possibility to create things, and leave them out instead of keeping them in the inventory. So maybe OS grid is helping people to be more creative. SL is just a place were they rip you off if you would like to make a place of your own. I made the sandbox here beacuse people need a place to rez things, and I was actually living there from the begining 2010. It was a fun place to live and to meet other creative people. In SL I was pretty much living in sandboxes or up on my platform 700 meters. I left, in the frustration of never having all my creations around me. This region is an inspiration source for me. I can pan around and look closer to my creations, and suddenly a new idea pops up. 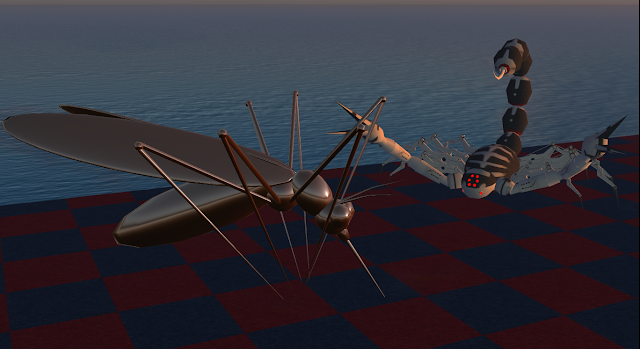 From those old days in SL, he brought with him several pieces, including the giant scorpion. One of the advantages usually cited by artists in SL is the cross-pollination that takes place, visiting other's installs, and attending openings. (Not to mention bitching and griefing.)
Cornflakes Woodcock: I did that a bit - go and see installation art. But I like to create, and to go explore steals time from that. It's pretty much the same here. 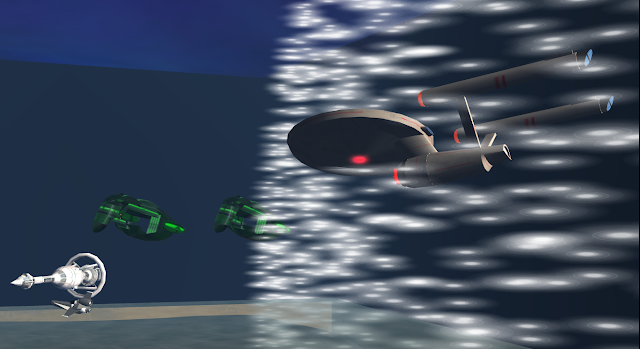 That said, he's quick to honour the work of others. You can see a range of Star Trek ships including a magnificent Bird of Prey in the sky gallery. They're the work of a friend, Cornflakes is quick to point out - the merit belongs elsewhere! It's the kind of building task he personally would find 'too realistic' to do, but he likes the ships and was pleased to give them a home. Below, games of perspective keep your cam and your imagination constantly at work. Despite his cry for a less 'realistic' world, Cornflakes is far from an abstract artist. 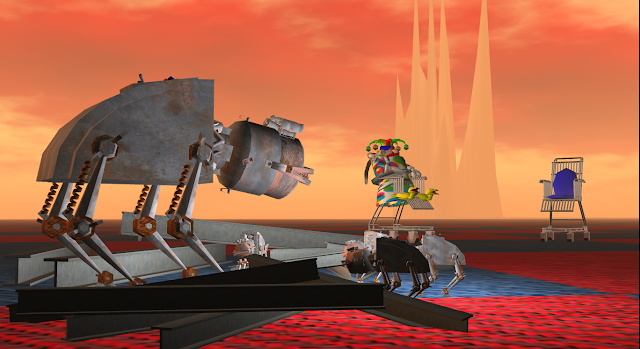 A robo-dog and her puppies - no bigger than an avatar's shoe - shelter under the giant ship. Some are set pieces, others look like a jumble of toys at first glance, but closer reflection reveals a little tableau of conflict. 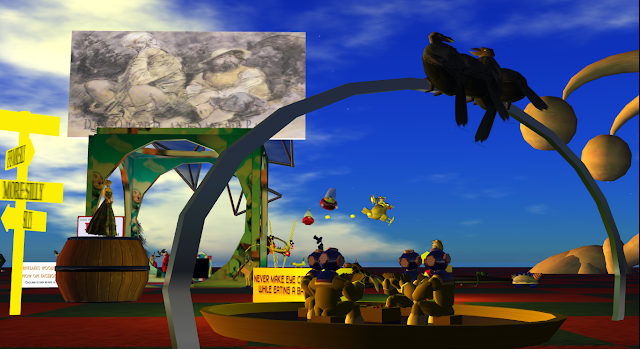 On the Freebie sim, harsh primary colours, clown figures and comical blocks square off against more organic shapes with sleek metallic lines, or detailed textures. Many are domestic, down-to-earth scenes with a twist - the giant clothes peg, or the improbable fish in its tiny, yet giant bowl.
The Sandbox contains Storm Petersen-like vehicles, and the Cornflakes' ingenious rats making off with the cheese. 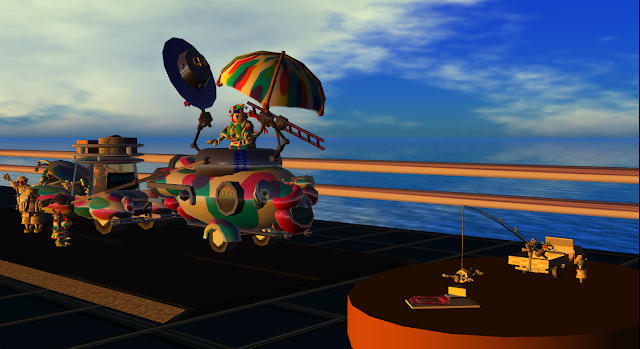 Primbuilds abound, but they're mixed with the softer lines of sculpts, when he feels the need. 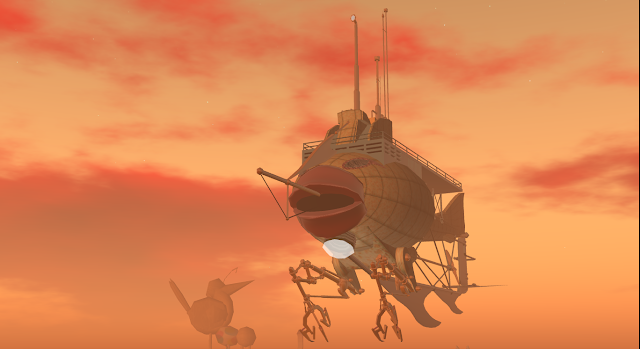 There is no prim-only snobbery here, nor any desire for the phoney fame so beloved of SL artists. No hostility either - after all, without Linden technology giving OpenSim a leg up, where would we be. But back to the 'thingys' - difficult work?
Cornflakes Woodcock: They are mostly hard to do - all of them with some exceptions. If you check the prims on my thingys, you will find that there are a lot of them in my creations. and that takes time, but the dustbuster and levitated Dummies were two of the hardest ones. 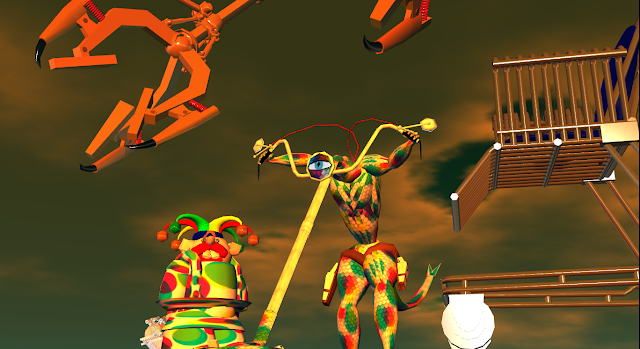 Cornflakes' sense of humour is tinged with something darker, here and there. In the lumber room of his mind, the light flickers off and on. Could it be a rat problem? He points to the rats with their pickup.
Cornflakes Woodcock: Those are a bunch of Cornflakes rats stealing cheese. They chew my wiring off and makes me build crazy thingys. Got a lot of those in my brain. 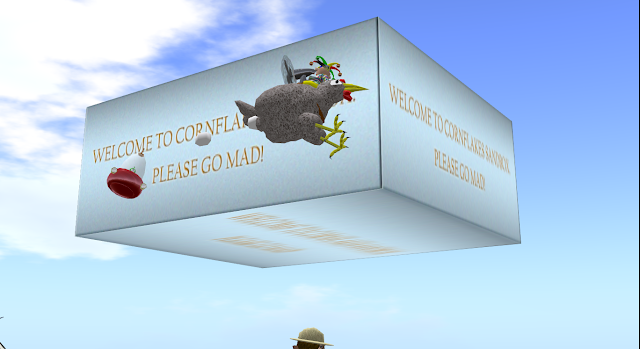 Cornflakes Woodcock: It's a virtual world, so why must things look like in real life? Never understood that. I try my best to bend on the RL rules, as you can see. I hope the people who like my stuffies will come to understand that there are other ways around. Hopefully my mission will be fullfilled someday, so others bend the rules too.
Posted by Thirza Ember at 7:09 AM