Wandering from grid to grid has become such a piece of cake. Anyone can do it, jumping from Upper to Lower (with some stopoffs in the super-convenient Hyperica stations) using a single avatar.
Backwaters, in other words apparently private or obscure grids, are now within Anyone's reach, and that may not be such a great thing, since the population of 'Anyone' seems to include a fair number of jerks. 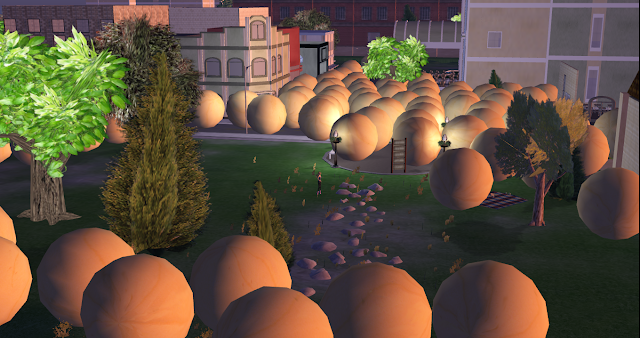 Look what they did to EUITOP, a tiny Spanish Polytechnic grid, with a little Linda Kellie downtown area. The place is overrun by raw spheres spewing, in a sinister, almost Lovecraftesque manner, from the lagoon. 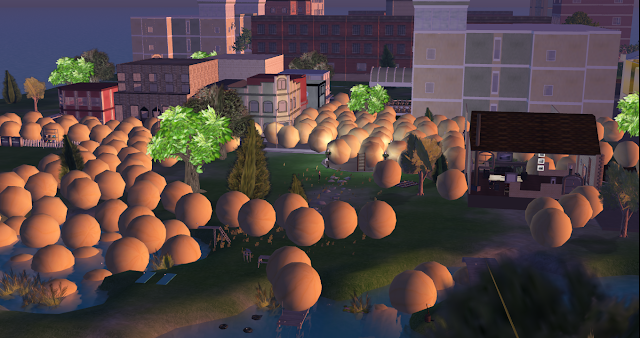 The spheres bear the name of a lady from Francogrid, I won't name 'her', but it's easy to see who it is. Euitop is a relatively new world, it only joined the Hyperica database in March of this year, and still has Build open to anyone. We've all experienced the
frustration of hunting around for a sandbox on an unfamiliar sim, this has to be the poster child for why they're hard to find.
The builder is the fabulous Mr. Test User, a fellow we all know well. One wonders - an experiment gone wrong? Wanton spawning? Or what? 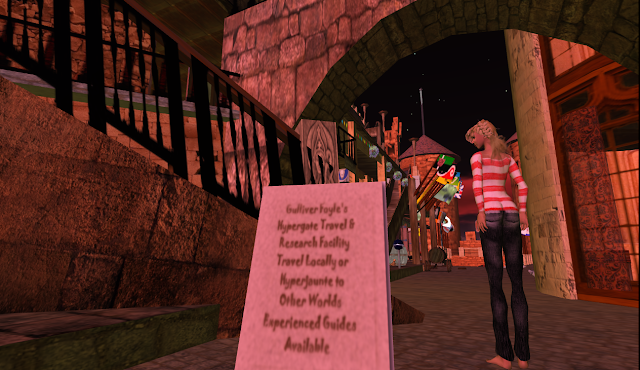 More disappointing is what's happened at Johnny Waugh's lovely sim Andelain, part of the New Zealand Virtual World land. Photos from some months back show it in its full glory. 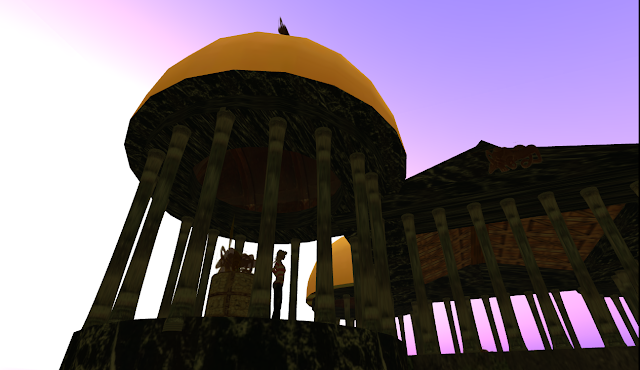 The sim brings together a broad selection of creeds, from science fiction to medieval fantasy to touches of steampunkery. There's a little of everything here, from Dr. Who to Asian spirituality. 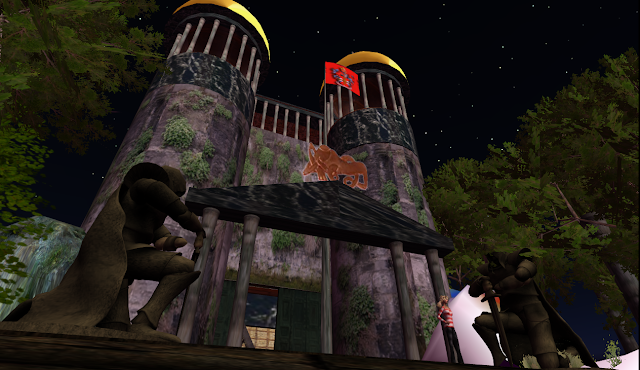 The mixture of cultural references was quite breathtaking; so much represented in such a small space. Johnny quite rightly takes pride in his open source compositions - no purloined sculptmaps here but rather freely available creation by the likes of Klarabella Karamell. 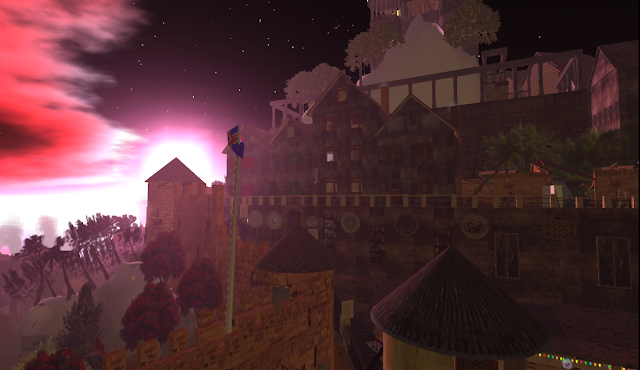 The build is a wonderful labyrinth of lanes and rooms, towers, balconies and waterfront paths. 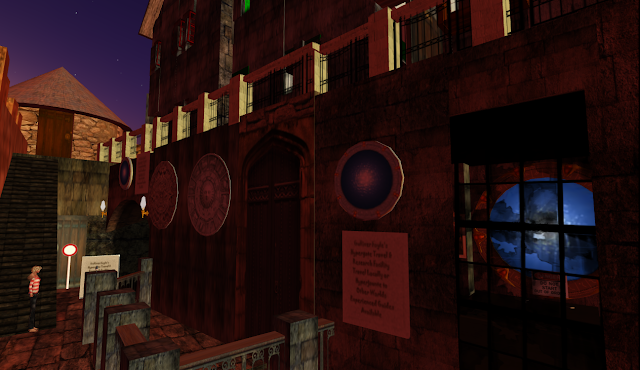 It must have taken ages to put together. Then, earlier this year, this happened. Unlike the EUITOP prims, these ones are cunningly marked as having Owner Unknown. Now it's impossible to move around. If the physical barriers don't block your way, the lag will get you. 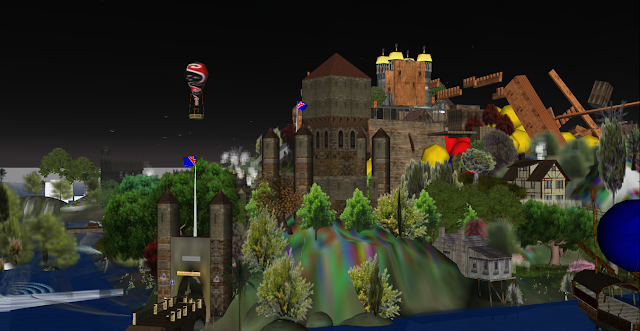 A couple of hundred physical prims, glued in triads of hideous primary colours, are piled up in the town centre. they've stopped replicating, it seems, but the damage is huge, as you can see. 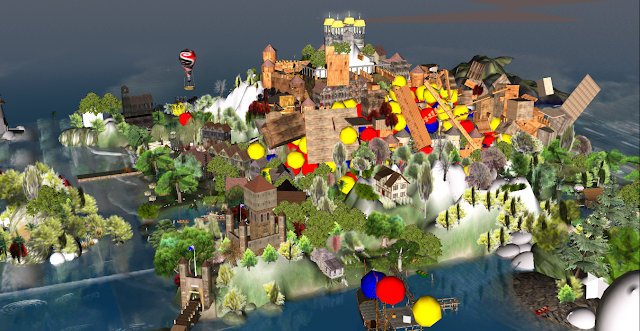 Johnny Waugh was not available for comment, but it seems unlikely this was an 'artistic' choice on the part of the builder (could it be an undergrad with a grudge?). After all, how could he wish to drown his lovely Italianate loggia? 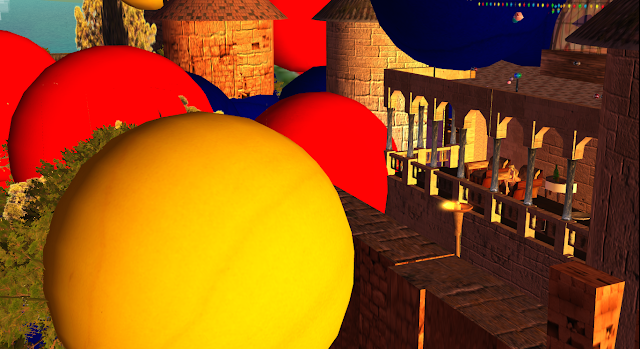 Accidents can happen, and in OpenSim, scripts don't always do the right thing. But it's a sobering reminder to all of us with grids, no matter how small and obscure: leaving Build and Script open is a bad idea, how ever lovely the ideal of the open house' may be. Well, at least it looks kinda pretty in wirefame. 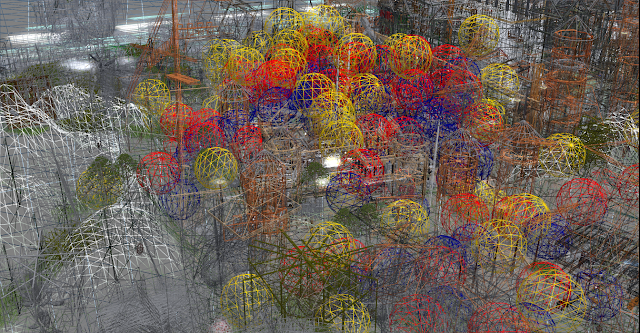 Has this happened to you? Do you have a story to share? please post it here, I'm curious to know more.
Posted by Thirza Ember at 2:05 PM