Nobody would argue (and on this venerable grid, that is really saying something) that the hero of Metropolis Metaversum is Neovo Geesink, seen here dancing along with the other star of the Goodbye to Metro party, LadyJo Martin. Wait, did this gif capture the hand of Kashi Takeshi? Classic Opensim. Metro was slated to close permanently on June 30, 2022, and we decided to party her offline.

The party got started, not at noon Pacific as advertised, but well in advance, thanks to the fabulous LadyJo who quite rightly wanted to make sure the grid didn't go offline early and uncelebrated. Eryn and Amylie were with her when I got there.
Neovo, who now helps out among the OSGrid admins, had the great idea. He decided to create a Metro Memoriam region on his own server, attached to OSGrid.
Since Neovo is still a volunteer or 'Supporter' on the Metropolis Metaversum - let's face it, the last man standing - his rights were sufficient to allow him to export a few of the classic architectural objects from public spaces on the old grid, and set them up on one of his signature regions, complete with big dance floor, sandbox, and yellow tape.
Neovo wants there to be a permanent place in which to gather and remember the grand old days. Thanks to his initiative, that meant that there were two party venues for us on the night - one on the old grid, inside the glass and concrete tower, and for those who couldn't get to Metro due to that pesky 'Unable to Verify' message, a very similar OSgrid party venue. Take a look at these gifs and see if you can  tell the two apart. Answers on a postcard.
A lot of early birds came by, some with a long history on the grid, some just paying respects to this slice of opensim heritage, including Cherry Manga, Fawn of_Endor, Lynx Juel, Aiko, Oarvle Mack, Em Jannings,  Kashi Takeshi, Mal Burns, and Plastichansa Bade.
Plastichansa Bade and Zonja Capalini, famous for their art on Condensationland, were some of the last residents on the grid. Spanish is their first language, reminding us of what a cosmopolitan grid Metro has always been. 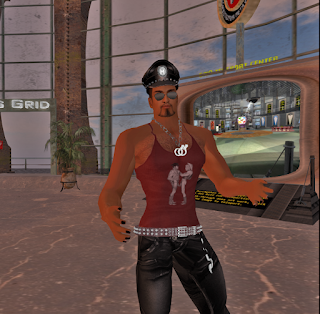 Metro welcomed people of all countries and lots of imaginative creators, providing the opportunity to attach regions to the main grid (as does OSGrid of course) and to be part of the wider community, while having the comforts of home.
We can never forget, too, the life raft that Metro provided for so many of us when OSGrid went offline for many months.  Plasti said what we were all thinking.
Plastichansa Bade: the truth is that I am very disappointed with the closure, ﻿but there is no march back. There is a lot of work in all these regions, ﻿many hours. In the end we were able to copy the oars ﻿and inventories.
Neovo Geesink: :-) So You have your regions finally? Good News.
Plastichansa Bade: ﻿ ﻿I just passed the official Metro logo in mesh, take it here, or you will miss :(
He passed a full perms Logo, and I wore it, and brought one to OSgrid too, because it dawned on me, Metro inventory could only last a few more hours at this point. Strange feeling, like losing a part of one's self.
Plastichansa Bade: ﻿guys thank you all, I'm not going to stay to watch Metro crumble to dust, a hug, we will see each other again. Deanna Janus arrived, full of joy as always, and while waiting for partner Elmo to arrive from OSGrid, she immediately started sipping that rather suspicious 'strawberry' drink that Bertha, Metropolis Grid's longest serving Chatbot and Greeter, has been pressing on all newcomers.
Deanna Janus: today, early, I was trying to greet her, but she didn't say anything... but only gave me the drink!
Thirza Ember: lol, the first one is always free

And then, the party just exploded. People arriving, rezzing, greeting, applauding, and dancing - oh so much dancing. Some interesting style choices, it has to be said, but all perfectly in keeping with LadyJo's  absolutely spot on playlist. She mixed it up with hits from metal to ballads, from Rammstein to Lady Gaga and back, lots of German songs and 'goodbye forever' music in there just to keep us on theme, it all exactly captured the spirit of the event. She is an Opensim treasure, one of the kindest, intuitive, reliable, and generous people you'll find anywhere - and we love her.

Meanwhile, over on OSGrid, the Metro Memoriam party had moved a few meters from the replica Startregion tower to the big dance floor. This was great, because anyone fighting to get into Metro could just come here, and in fact, thanks to Neovo's Teleport device, quite a few were able to jump from OSGrid to Metro, where previous attempts with the LM or URL had failed. Usual Opensim voodoo.

Then  SheriffDawn.Summers had a great idea. Why not go down to the dance floor, in the lower region of the tower, and party there?   A little adjustment and a few tps later, there we all were back in the groove. People were constantly coming and going, dropping in for a few songs, then getting back to other commitments and so the place was alive with conversations, people re-discovering old friends and just enjoying the sight of familiar nametags, now dispersed across other grids.
Jupiter Rowland: This must be the first time in more than two years that this floor has seen an event.
Thirza Ember: the dust proves that theory, Jup
Susannah Avonside: YouTube video of this party: https://www.youtube.com/watch?v=WPWFvYJa6q8
ladyjo martineeqe: almost 50 all together between the two parties
Jupiter Rowland: Some are at both parties, though.
Thirza Ember: yes but we love Metro TWICE as much
Piper Perano: it would be nice, if we can advertise our parties and perhaps homes on the new Metro Memoriam Region in Osgrid, what do you all think about that?
ladyjo martineeqe: great idea
Piper Perano:  so if Neovo have small space in Osgrid would be nice :)
Neovo Geesink: I do.

The conversation turned to fears about oars that may be lost, and about not losing touch with one another again. Some, like Fawn and Storm, have been touring the grid in the past weeks, drinking in for the last time many lovely regions. Most people it seems have found other homes. Some on big grids, while others have taken the plunge and set up their own grid, like Wordfromthe Wise at Scripted Magic, or Anna Carlberg on the new Carima Grid, with all that RP and amazing landscapes. Anna said that the Amazones, after 15 years in Second Life, have just moved to Opensim and chosen to settle on Carima Grid. So life moves on, and change, though painful, can bring good results.
Storm Juel: Then again, the most important thing Metropolis did, was to offer a place for self-hosted sims while the OS Grid was down and before Dreamworldz. That was crucial for the sheer survival of the hypergrid but it's hardly needed anymore of course
Lynx Jewel: It's an important point. Metropolis may be gone soon but the hypergrid lives on and very much thanks to it.

Gradually, the OSGrid party got smaller, while the fun on Metro only increased with people arriving, or returning, half expecting to find that we had all been poofed.
Questions raged. What time would the server shut down? Nobody imagined the Grid Owners with a stopwatch and a big red switch, but would the hosting company send a tech to turn the machines off when the money ran out? And what does 'June 30' mean? Midnight on the day? And which midnight? Germany, or somewhere else?
For a dance party, it was a pretty intellectual conversation.
There was a lot going in in Chat, not helped by a strange echo that duplicated everything you said, but I wanted to know what regions people remembered best of the old place.
lite house: Metros Dune sandboxes were mind blowing when i first came here lol
savino svm: i remember the sim with the train with the stores around and metropolis radio
Neovo Geesink: Yep That was *Centerworld* That Bahnhof.
Amylie Avedon: bist du das die Regionen sucht an die man sich gern zurück erinnert?: ich wüßte noch eine Region Tancorien. War eine rollenspielregion
[Are you looking for regions to remember?  I know of another region, Tancorien, a role-playing region]
My faves include the region that Nara Malone arranged for the Safari to use in 2014, Outworldz, but also Pompeii, Metroberfest,  Wonderland (that sim-sized room with dogs and chocolates and goldfish bowls as big as houses) and so many more. Luckily the Safari Blog you're reading holds those memories.
The next person who was able to answer me was the lovely Arielle Delamerlibre, formerly of Phaandoria grid, now on Dereos, famous for her wonderful mermaid creations, one of which she wore for the party.
Arielle Delamerlibre: oh yes the best region I remember were 3.
Arielle Delamerlibre: La Baronnie, because I got there so much useful stuff. The region of Taarna, I adore her much, very helpful avatar mesh knowledge, she made the 1st mesh feet, the reBoot feet.
Arielle Delamerlibre: The sandbox was the best meeting place for users to have a talk about building, meet new ppl,
Arielle Delamerlibre: and the third with a big thank you was the home region where I had after coming into Opensim 10.000 sqm Land for my first mermaid design
Finally, I spoke to Brucha aka Piper Perano who gave me a nice answer while she danced on the OSGrid party, in company with Rosanna Galvani (and friend), Frank Gresham, and Luna Lunaria, on Neovo's colorful dance floor.
Brucha Resident: ah ok, so we write english .. the Childrenhouse is still up in free-souls.de Grid, also some of our old regions too. [with Eryn Galen]

Midnight German time came and went, and the grid didn't even shiver, despite over 30 avies all on the one region, teleporting in and out. I made a script to animate that Metropolis logo I was wearing, the thing took effect without a wisp of lag. Solid as a rock.

When I left, it was from pure need for sleep, and LadyJo well, by this time both LadyJos, in white and in green, bad me goodnight, vowing to stay on as long as there were avies wanting to dance.
Some hours later, I logged back in... 'just to see'. Piper, Deanna and Fawn all had had the same idea. Here we are, looking like we are 70's throwbacks, still having a giggle on the grid.
Hey, try tping over. The party may be still on. I bet Bertha is still handing out those drinkies...
Thanks to everyone who showed up, on both grids, and most of all to Neovo Geesink for his perfect preparations, and the Queen of Opensim, LadyJo Martin, who is simply the best there is.