Safari Jukes it Out

Unadecal Masala: personally, I am a sucker for wrists

The Jukebox was invented by Louis Glass, and the first commercial use of this iconic music maker was in 1889, in the city of San Francisco.  An intriguing and beautiful invention, it brought together technology and art in one magical box, very much like the two builds we visited this week, in two completely different styles, but both pretty mindblowing!

We visited Coopersville on Kitely, the enormous Edwardian region owned by Koshari Mahana, where you can enjoy a wide range of activities, from ballooning to old time movies to bumper cars, all in a perfect historical setting. Before that, we jumped over to Cherry Manga's brand new Jukebox installation, on CopyKat grid.
Complete hypergrid addresses are, as always, at the end of this post.

Cherry Manga is one of the most sought-after artists in Opensim, and Jukebox is a fascinating build that revisits and relocates lots of her best creations from over the past decade or so.

Using Advanced Lighting, which enhances immensely their complexity and beauty, each installation is accompanied by a piece of music that is significant to the theme of the build. Use the retro Jukebox as a teleporter to move around the various rooms! 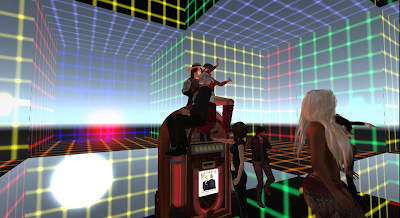 Well that's what you're supposed to do with the Jukebox, but this being the Safari, right from the get go, there was a certain amount of abusive sitting going on. By the way, pro tip, if you arrive at Jukebox and do not see the grid pattern, then you don't have Advanced Lighting turned on. See your local Firestorm dealer for more information on that.
Han Held: I'm sure I'm pushing ppl around, I'm afraid to land -sorry about that!

Kelso Uxlay: Fantastic! Cherry is the absolute master of OpenSim
Roland Francis:  I'm in awe with this setting
Thirza Ember: each room's so different, even though the art is familiar to anyone who knows Cherry's work. Seeing it all together makes one realize how diverse her output is. With some artists, every piece they make is similar, but Cherry is very innovative
Cherry Manga: saying in Voice about old stuff recycled lol
Thirza Ember: well, that just means it's a green build
Cherry Manga: lolol yes, it's saved assets, at least ;)
Thirza Ember: did you think of the songs after you made the installation, or while you were building it here?

Cherry Manga: for this green recycling, after ;)
Thirza Ember: hehe so even the music is retrospective
Nara.Nook: It's a perfect place for setting your imagination loose. I love the variety of musical styles
Cherry Manga: everything makes sense with the music, well, to me... :)
Roland Francis: Totally in love with this one
Roffellos Kisses: a dream of the last plant shared by all Cherry ?

There are half a dozen different builds, - and they are very different in style, color, musical accompaniment and 'forced' animations (the kind that capture your avie and make you take up a pose or dance that matches the theme of the build) - so make sure you visit them all, we just didn't have time to completely absorb them all, in the 50 minutes or so that we had on the region. But for most of the approximately 25 present, lag seemed to be minimal, even though we were rushing around randomly. Kudos, or rather Shōsan, to Lady Copykat.
And then off we went, to Kitely.
Koshari Mahana: Welcome to Coopersville! It's so great to see you all here! Koshari Mahana: I'm Koshari and I am the creator and hostess of Coopersville. If you did not accept a welcome kit when you arrived, you can click the sign behind me and take one. There are a lot of goodies inside.  We have a lot of textures and prims here so you may want to turn your draw distance down depending on your computer. It will also help to turn off Advanced Lighting Model if you have it on. Our community is based on the Edwardian era which is roughly between 1900 and 1915.

Koshari Mahana: Technically, it's the time after Queen Victoria died until King Edward died. We are flexible here though simply because it's not always easy to find Edwardian-era things in the hypergrid. Generally, anything from the Victorian era to the Roaring Twenties can be found here. We are not limited to the United Kingdom by any means.
Koshari Mahana: The "feel" of the era was happening all over the western world. In the United States, it is often referred to as "The Progressive Era" because Teddy Roosevelt was president at this time. A fun fact is that the first transatlantic two-way radio call was between President Roosevelt and King Edward in 1903. Most of the world enjoyed the early years of the new century. This era was often referred to as the "Edwardian Spring". Even though it was short-lived, many people were feeling very hopeful about the future. Little did they know though that the Great War was right around the corner. But, like all eras, not everything was rosy for all people. In Coopersville we are more focused on the happier moments of the era.

Thirza Ember: we all need the rosier side of life, this week
Koshari Mahana: They also saw the invention of airplanes, moving picture nickelodeons, lively music like ragtime, and of course the suffragette movement, which we all know led to women earning the right to vote. Oh, and dare I say, women's ankles were beginning to show!
George Equus: Outrageous!
Roffellos Kisses: disgusting!
Unadecal Masala: personally, I am a sucker for wrists
We took a tram, which was a really great way to stay together as a group and still see a huge part of the main island. It is dotted with all kinds of houses that echo the period, and literally hundreds of small and exquisite details. You can enjoy a wide range of activities on this huge 64 region community, and even rent an island, if you wish.

There are shops with items for sale, but also many free activities, like ballooning, vintage airplanes, and (courtesy of the great Kayaker Magic) plenty of watersports, from surfing through to sailing or sunbathing on the lovely beaches, with their cute bathing chairs, and simply enjoying the serene and lovely view. There's a vintage movie theater that plays films, places for dancing, and wherever you go, you can delight in the vintage music which really brings the atmosphere of one hundred years ago to life. 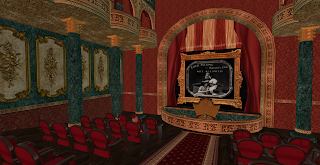 It would take many days to see the whole of Coopersville by foot, so if you don't have time for that, you can quickly and easily get to all the main points of interest with a very well thought out and decorative teleport board, which manages to blend in with the build without, as so often happens, being hard to distinguish from the rest.

At length, we arrived at the Funfair, which is enormous, and hugely photogenic, and after quite a remarkable walk, in which some of us got a bit lost looking at the palm reader, the acrobats, and the wild animals.
Koshari Mahana: Down the hill to the left is a swan boat ride that I'm still working on, it's not quite finished yet but can still be used.  Here I've sort of combined a circus, amusement park, and fairgrounds into one area. I'm still working on a large dance hall that is still being built ... so we won't go there. :)
To our left is a beach for hanging out, sunbathing, or swimming, and over here are several arcade games to play, most give prizes too.

We finally ended up at the Dodgems, where as you may expect we managed to crash. A lot.
The very last part of the visit was the delightful summerhouse that evokes all kinds of thoughts of sleepy afternoons and the sound of cicadas and waves rolling over the shore.

Here, a band of NPCs was playing some great dance music, and we all jumped onto the dance floor and showed our ankles. And our wrists.

To learn more about Coopersville, do drop in on Kitely, and check out the dedicated website at https://coopersville.mystrikingly.com/
Destination Addresses:
Jukebox by Cherry Manga           grid.copykat.ovh:12000:Jukebox
Coopersville by Kosari Mahana   grid.kitely.com:8002:Coopersville