The final Safari of this first season of 2022, and we ended on a high note indeed! Two completely different, yet equally interesting destinations this week, as we visited the vast space installation by Ferd Frederix and Joe Builder, and then called in to see HG goddess Diva Canto, aka Crista Lopes. This is Part One, and deals with our visit to Outworldz. For information about our trip to Crista's grid, see the post 'Closing at Crista's'

Our host Ferd joined us at the Clubhouse in robot form yesterday, and brought a nice gift - it's a little
robot follower similar to Ferd's avatar, with a significance you will understand better if you know the movie Silent Running, or have watched the Making of Silent Running'  documentary about the 1972 Bruce Dern movie, directed by the late Douglas Trumbull. 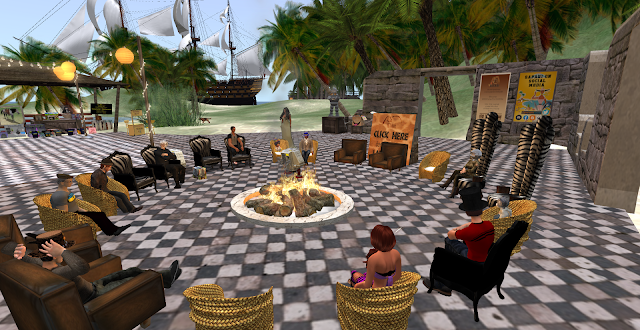 Ferd Frederix: Oh look! Humans! All the usual supects, too!
Kelso Uxlay: Hey Ferd!
Nebby Newman: hihi Ferd!
Ard Rhys: Hi Ferd
Ferd Frederix: Hi everybody! Thanks you for coming! A couple of things I would like to mention.  This is a tour of a movie set that I've extended a bit.  It's a few days before the actual movie was made, and there has been a delay to launch due to an accident with a dome.   You start at the top of the ship and take the elevator around by touching the floor  to sit and you get controls.
Kelso Uxlay: I watch the making of for the film
Ferd Frederix: It includes a second sim, that is optional - an earth representation in the movie.  Where they launch the ships.
Ai Austin: I love the Silent Running maintenance drones :-)  And I ses ferd has morphed into one
Ferd Frederix: They are freebies - I think Thirzyyy set out a box here
Beth.Ghostraven: Ferd, do we need sound?
Ferd Frederix: It helps set the mood, yes
James Atlloud : wow - can't wait!
Ferd.Frederix: Thirza has been really good at killing my old I7, then my Xeons, and now we try again... This is my third lol.
stiofain mactomais: freds server is prob immortal
Ferd Frederix: You can kill my server any time, people.

Ferd Frederix: There is a EEP to change the sky to the orbit of Saturn so you should set your World->Environment  to "Use Shared Environment"  I've been studying this space sim so long my heads full of it. So set the environment to World->Environment  and set that to Shared Environment to get the sky correct. We are in orbit around Saturn The elevator to get to other decks is in the middle. Touch the floor. Be sure to check out the rooms on the deck below us.  Its full of interesting movie things in some of the rooms. 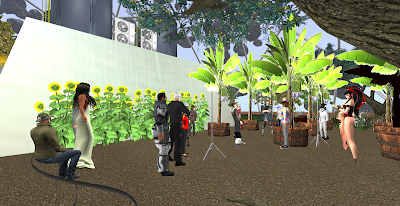 The landing point for this build is in one of the domes, which are the earth environments - supposedly the earth is now all tarmac and nobody is interested in eating natural food, preferring synthetic meals. There is a first slightly chaotic impact of the busy voices of plants and robots in the farming part of the space station, giving a sense of life and growth and, to be sure, a great many more banana trees than I was expecting to see.

James Atlloud: Ferd, do you ever use mouselook to experience the build? There was a discussion at the safari home region about VR - I know many are not in favor of it, but I would have really enjoyed Silent Refueling in VR! Before VR, I was a frequent user of mouselook to get the 'VR feel'.
Thirza Ember: if you saw the film or the documentary, you will know, this is a very close reconstruction, and if you didn't get time to watch it yet, I hope you do later, you will be amazed!
We soon got into the vehicles - many of them featured in the movie, like the little cars that Bruce Dern's crewmates use to run over the plants in the first scenes of the films. Mal found a small space vehicle, which he got stuck in an onlive tree, what a vandal that man is.
Ferd Frederix: physics on the cars  may be wonky with all these people. Take them, they should be free -  Many of the ship items are free, Joe Builder and I have worked on this for a long time.
Thirza Ember: it's brilliant! how do you work together? do you share the tasks or have specialties?
Ferd Frederix: Share dropbox files, and talk a lot ! lol

There is so much to see on the region! Many of us preferred to cam or tp around rather than to use the elevators. But that's really because there were 25 of us and we only had about an hour to get an idea of what was going on. There's a cool control room where you suddenly find yourself in zero gravity, a gallery of photos of the actors who appear in the film, and another that contains copies of vintage posters from the film's release. By the time I got to the poster room, Ferd had turned into a giant pink mouse. 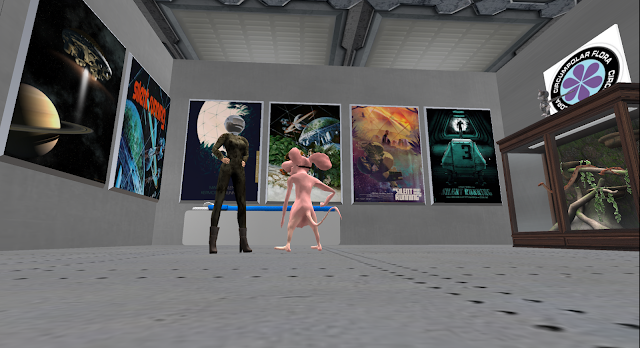 Ferd Frederix: I love these posters, People are so creative about old , classic movies
Thirza Ember: it's a movie that inspires artists - I love the American airline logo in it !
Ferd.Frederix: shouts: anyone found the main bridge yet? 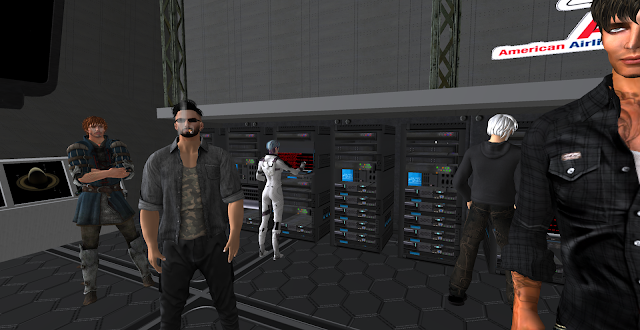 Ferd.Frederix: This ship. Joe spent weeks uploading stuff I bought - a month, maybe.  We had a LOT of things to being in.
Joe Builder: oh the dreaded dropbox
Thirza Ember: i love the many servers you have in here - do they work?
Ferd.Frederix: Yes, they run this ship, Thirza

As often happens on Safari, our French contingent were very vocal on Voice, and this trip was no exception. It brings an exotic element to our trips. Ask anyone. On a sim called Silent Refueling, it was particularly - evocative, is that the word I'm looking for?
Joe Builder: the french folks are discussing how to take over this ship 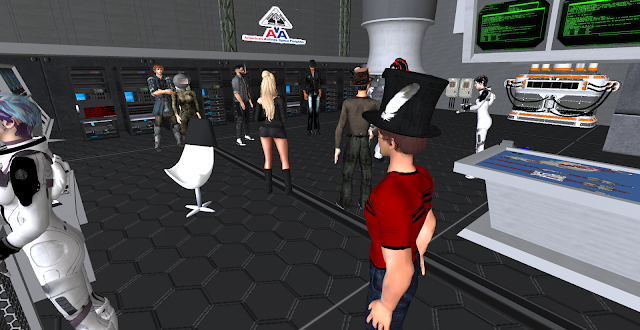 Frank Gresham: I stranded one vehicle floating out in space. Could not find a way to get it back.
Ferd.Frederix: Thats okay, I clean them up occasionally. There are some nice  free spaceships. One below us here sticking out the side, and the small ones from Vegaslon are very nice.
Luna Lunaria: I like spaceships :-)
George Equus: Very impressive build! It's huge! 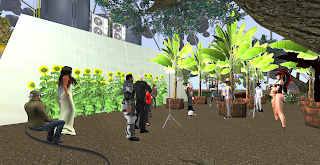 Ferd Frederix: we have the french trying to break into the ship...Someone tell them we have nukes LOL
Jeff Kelley: french intruders around... French alert!
Prodyck Theas: French warning  oula ??
Ferd Frederix: there are mines near here where they break down the water into fuel and air.  And mines where they get nitrogen and phosphorus for the plants in the domes
Thirza Ember:  So, what is the plan for this build? will there be a hunt, or a trail to follow?
Joe Builder: return to earth?

Ferd.Frederix: Oh, Earth orders us to blow it all up with Nukes.  Bruce blows up the dome with  the jerks in it. Then launches a robot to the stars after figuring out the lighting issue. One dome survives, and thats run by Huey. Or maybe Dewy.  Ai Knows
Joe Builder: excuse me why i rezz a escape pod :)
Kelso Uxlay: I just watched "The making of". Nice to see how the robots moved
Jeff Kelley: my ultimate reference is The Hitchhiker's Guide to the Galaxy
Luna Lunaria: Love this room Ferd
Ferd Frederix: Thanks. Joe did much of the building here.
Luna Lunaria: Nice work Joe
Joe Builder: ty don't listen to fred on that lol 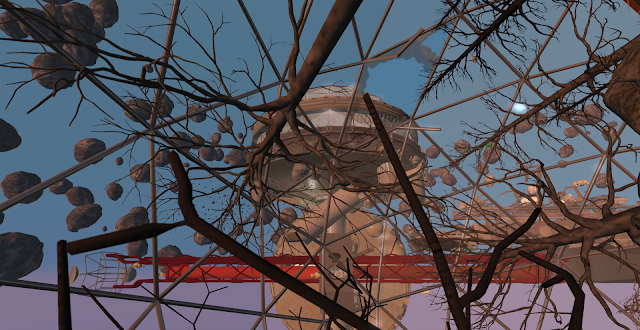 Thirza Ember: It's great how you have even recreated the dome where the trees have all died. I wonder how many years you been building in opensim Joe? It must be more than 15
Joe Builder: 11
Thirza Ember: wow and never afraid of a big build
stiofain mactomais: it is running pretty smooth considering amount of avs and detail
Ferd.Frederix:  There is a second sim to this one, too!  You go down the stairs and it takes you to earth 'Silent Running Base' on the map is what Joe and I think Earth may be like in the movie. 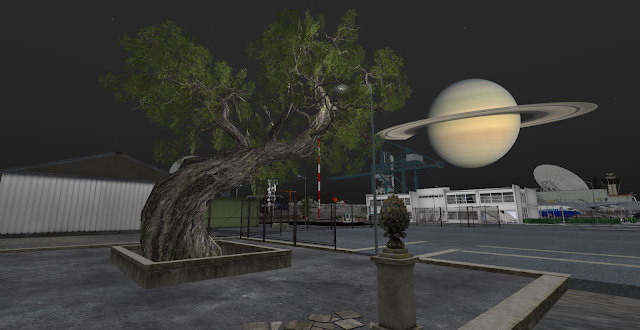 Thirza Ember: this is definitely one to visit with more time
Ferd.Frederix: Almost time for the next hop
Kelso Uxlay: Thanks for receiving us
Jeff.Kelley: thanks Fred and Jo, amazing build
Joe Builder: always welcome
Ard Rhys: Thanks Ferd
Harthelie.Deux: merci pour ce build gigantesque bonne soiree
James.Atlloud:  - many thanks to you Ferd!  Such a tribute to an ambitious movie.
Frank Gresham: Thanks for the tour Fred.
Nebby Newman: I was watching the movie trailer on the Ground very cool build, Ferd!!
stiofain mactomais: thx ferd and joe will come back for another look
Ferd Frederix: Happy to have you, stiofain! This is a record for me. Only one script error! 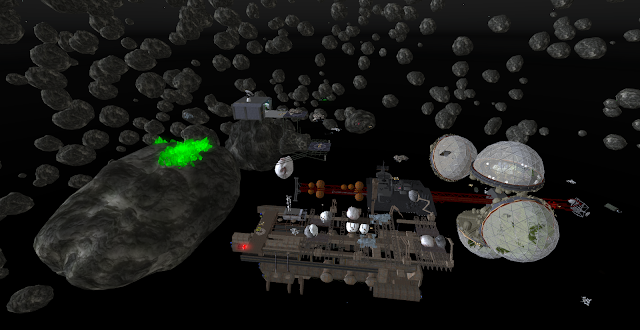