There was a poetry to old school SL names. 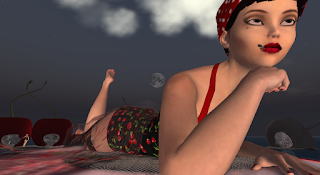 Their two-partedness and their permanence spoke of  a level of self expression that leaves the dumbed down display name and single moniker in the dust.  To make a name for oneself - that brush with destiny: the first name chosen from within, the second name chosen from a world-imposed list. Together they formed a double-edged identity card, showing a piece of yourself as an individual and where you place yourself within the wider world. Perhaps that's why so many SL names persist in opensim.
Cherry Manga is a case in point. Manga, and the mind flies to the unreal figures of the comics, to the culture of Japan, to romance and theatrical gestures, to space and cyborgs and superpowers, to lovely elemental battles. And Cherry? Thoughts, perhaps, of sakura, or of chérie, or of red and ready fruit, tasting sometimes sweet, sometimes a little sharp, fated to be popped. It's all in there, one way or another.
Cherry Manga: Japan always fascinated me, it's so far from my own culture, it's delicate, precise, perfectionist. It's like I am related to Japan even if I never put a foot there. I would say first inspiration would be surrealism though, all mysterious, dark, and mostly everything I make is autobiographical. I build my feelings, my dreams, my pain. 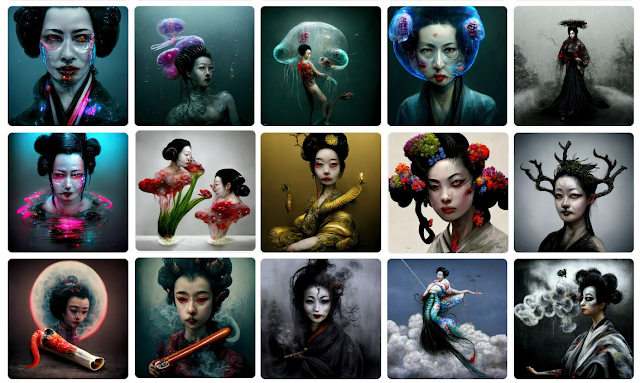 This Midjourney AI artwork, made in 2022, glimpses the future of Cherry's art. But first, let's go back to the beginning.

Here is one of Cherry's first art pieces, dating from 2007, the year she arrived in the metaverse.
It's immediately clear that the lego-like quality of prims was never going to be enough for her art style, although she took the taper and twist to a fine state of play . Lyre-like wings, patched with newspaper, and a segmented body made of cryptically cut  cubes, topped by antennae that would not look out of place on a Minotaur. From the start Cherry's art promised a metaphorical mashup.
Key to her art, though, is the avatar itself - the body as canvas, clay, concept.

When Cherry discovered Second Life, she did so under the impression it was pretty much just a social thing, like so many of us, a "multiplayer game" if you will, although she was aware that SL was not a game but a metaverse.
The signs were all there from the start.  While many of us were trying to get the abs or the boobs or the improbable hair or youth, Cherry was already a little dark, a little ethereal.
Cherry Manga: Few minutes after my first log in. A guy sent me this picture, I didn't know how to make one myself and wasn't able to see my avatar's face without editing appearance. It took me ages to use control camera. Many thanks to this guy, without him this awesome freaky look would be lost in ages.
Anley Piers and Cherry started Mysterious Wave, a sim and a group to promote their art. Here, Cherry began to make clothing, tattoos, furniture, wearable and posable sculptures, even houses. She and Anley began a long collaboration, although both also worked on solo projects, and with other people. 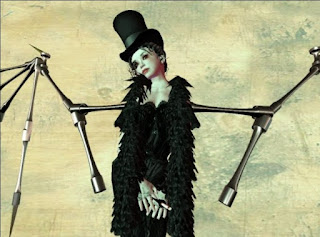 Cherry Manga: I did art IRL, and when I had my first computer, it was the tool I fell love with to create (digital paintings, videos, sounds...), so when I realized that I could build in SL, it was a big bang, I found the perfect tool to express myself. The first gallerist who wanted me to participate with Parc Des Arts, with Katia, who moved to opensim a bit before I did.
Within a short time, the look had become far more sophisticated, sharper, with touches of steampunk and cyberpunk.  She created strong thematic avatars that have stood her in good stead for later projects in opensim, like this Cyberwolf, in a photo taken using wireframe, that pops up again years later at Fest'Avi. 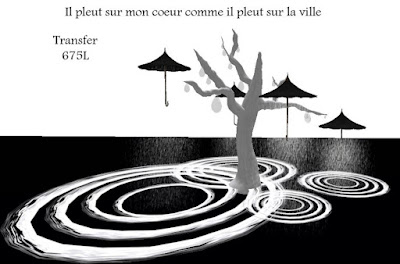 Numerous pieces were for sale, from complete avatars to tattoos to artwork and clothes. They all share the same dark, shapeshifting, limit-blurring vision. Here is a handful of the items you could pick up on Mysterious Wave. 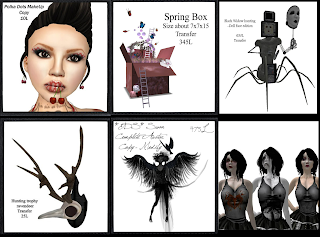 And while cash is always handy for paying upload charges and tier, not everything was for sale. This item, for example, was a free gift with the Mysterious Wave group in 2010. 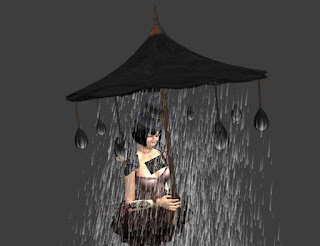 Classic Cherry, the organic shape of a sculpty is combined with particles and the whole is an object you recognize, but climatically turned inside out.
The idea that, wherever you go you take the weather with you, is one that she has carried forward throughout her trajectory.
At the same time, her art was beginning to be displayed at places like Arte Libera, MeTaLes, and Pirats, UWA. Those early galleries were marvelous nurseries for talent, and also a great crucible of personalities. They offered, through regular and frequent social events, an opportunity to connect with all kinds of other artists and art lovers, to build the confidence of the exhibitors, and created a network of contacts that endure to this day. 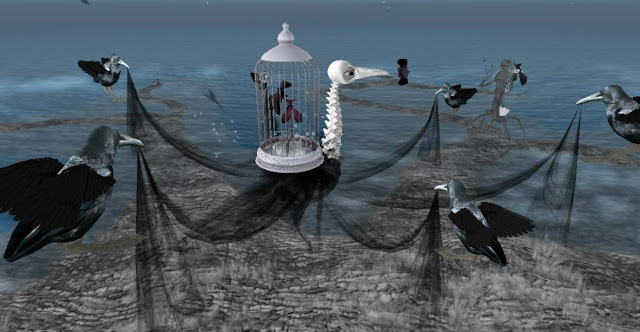 Cherry Manga: it helps to be more organic and precise I would say, but some guys do wonders with just cubes like in minecraft for example. Because I am a lot into surreal things, it's easier to work with mesh than prims, but I still love prims. I started mesh in SL, that's the first thing I made in opensim when arriving, to recreate exhibitions I made in SL, here.
Animated art has - it goes without saying - a life of its own, and this adds enormously to the atmospherics and the sensations it can provoke in the audience. Cherry's rather uncanny Puppeteer Avatar, a precursor to the animesh and NPCs that we are more familiar with today, speaks to a sort of girlie monster in fishnet tights, a worm in its beak, part Edgar Allen Poe, part Roland Barthes, part Edward Scissorhands even, perhaps. 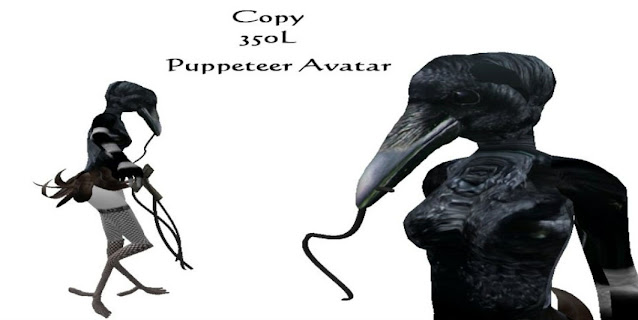 In these early Second Life years Cherry met many friends, colleagues, collaborators and mentors. Among the friendships and creative partnerships she forged at that time were Katia 'ParcdesArts', JadeYu Fhang, and Morlita Quan, a sound artist renowned for her aural concerts - so much more than just music.
Morlita Quan: I remember well the first time I met Cherry. It was on first years of Second Life more than one decade ago. She was making an art exhibition (extension of Mysterious Wave, the sim she had at that moment). Owners sent to Cherry the music I created and was an automatic click for both to start collaborating . That was the first set I made for her , but, with the years and friendship collabs were deeper, so I started to create specific music for her installations and vice-versa.
It was in 2010 that Cherry won the very first edition of  the Nordan Prize, an award associated with the UWA, the art group associated with the University of Western Australia, and run by JayJay Zifanwe. The opportunity to participate in this kind of competition, with a real cash prize, and under the aegis of a real world institution, was for so many Second Life artists a great boost to their self image as 'real' creators of art rather than dilettantes. The collegial atmosphere and professionalism also helped keep egos from running too amok, too, for with so many talents on show, only an utter narcissist could posit themselves as the best of the bunch. It's a much missed part of Second Life. 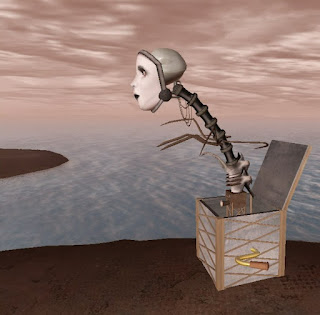 Jay Jay Zifanwe: Cherry Manga was one of the regular artists at the various UWA challenges over the years, often creating in collaboration with Anley Piers. She was one of the creators who helmed the full sim for the UWA Full Sim Art Series, a precursor to the LEA. Her work was always special, always unique.
Apmel: Back in 2010, together with Flora Nordenskiold, I awarded Cherry Manga's sculpture 'Doll Face' the first yearly Nordan Art Prize. I was intrigued by it and bought it later when I got a chance at her Mysterious Wave sim. When asked about, it she admits to being inspired by Andrew Huang's 2007 video work Doll Face. I put them up face to face at my own sim for a long time. (You can read more about that here.)

Fuschia Nightfire: Cherry is a unique and very original artist. She also has a fantastic sense of humour, we used to have a lot of laughs! I made this Machinima of  'Art of the artists' in 2011, in it I deconstructed some of the aesthetically pleasing installations on show at UWA at the time, and turned them into real world paintings. Cherry's build was a must-have in the collection.

Over the years many of Cherry's projects have been collaborative . In 2011, the UWA awarded Cherry, along with Anley Piers and Elfe Imako, a whole sim - a big deal in Second Life, and an opportunity that they made the most of. This was the AI-inspired 'Other World'. The Aerie,  was another success at UWA, this machinima is by Joe Zazulak better known inworld as Spiral Silverstar.

The move towards mesh in Second Life began, you will remember, with sculpties, which were rainbow colored textures that you could apply to a prim to turn it into a more organic shape, or simply buy already applied to prims. 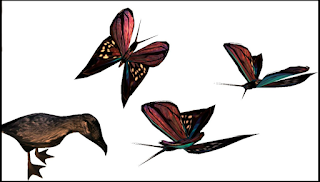 Early sculpties were body parts, hats and belts, vases, and building elements - everything from pillars to pillows. Cherry having made full use of the available bits, soon wanted to make her own.
In August 2011, Cherry posted this on Facebook. "My very first sculpty made with Jass Pub (based on blender)... it's very bad but for a first try it's not so awful. It's supposed to be a seagull but I have to learn how to make textures so I made it a crow XD. Second try with butterfly... improving slowly". 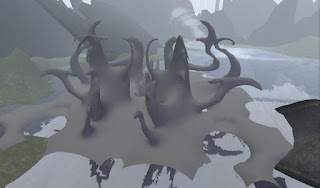 By December of the same year, Cherry's imports were getting bigger and more complex - and more frustrating. She writes: "Test mesh: la merde. Un bidule [thingy] à cette taille: X 3.52474, Y 3.26802, Z 1.4678 = 8 prims. J'ai tenté d'agrandir.. me suis retrouvé à plus de 1600 prims youhou 😬".
Lots more experimentation needed, clearly, but in this thingy are already the stirrings of numerous far more ambitious builds to come.
This won her accolades from art critics, admirers and colleagues, not just for the things she made, but also for the way in which she shares and collaborates with others.
Betty Tureaud: I have always admired her for trying out new technology and breaking boundaries with her art. Cherry is generous and a nice person. She is also full of imagination and can create unpredictable new worlds.
This 2013 video 'Thinking Heads' is a poetic presentation of a new head attachment by Anley Piers and Cherry Manga. The idea is that anyone can personalize the texture, using their own skin if they wish, subverting the trope of the airheaded female avie so beloved of the leisure-loving caste of consumers so prevalent in SL.
Change was in the air, as will be seen in part two of this survey of the art of Cherry Manga.
Posted by Thirza Ember at 3:07 PM