Summer of Love on Pangea

There was another triumph tonight at the Pangea Art and Culture Festival, ongoing throughout this year.
No doubt Lampi will have a video of it on her Youtube channel shortly, so make sure you subscribe! 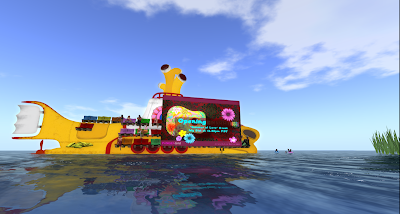 The spectacular stage, which can be turned to present differently decorated dance floors, was built by Zimp Rexi,  as was the fantastic Yellow Submarine which served as the seating area for the public. The program was a set of 12 songs that capture the late 60's spirit of hippy humor and happiness, with a few notes of combative spirit just to spice up the action. A large slice of Beatles, but also a bit of Hendrix, Franklin, the musical Hair, and more.
The dances an intricate mix of particles, animations, and outfits. Unlike a chorus line of NPCs, each avatar is a real person, who must stand in the right place, remember what outfit to put on and when to jump on the poseballs. With a team of a dozen avies, that means a great deal of coordination and preparation. 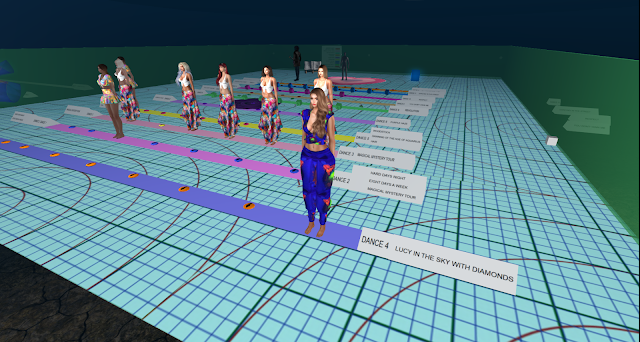 The 'green room' - located under the water - is itself a work of beauty, with everything laid out clearly so the participants can quickly understand where they need to be. I asked Arcanquest (after the show, not during! ) what it's like to be part of an event like this.
Arcanquest Frank:  In SL I'm a member of three dance companies, so although it's not easy, I'm used to this kind of event. I wanted to be part of Summer of Love, because I really liked the theme.  It is a lot of fun to  participate in complex shows, and we have three really talented organizers here, putting together the animations and the sets and so on - Alazi Sautereau, Medora Chevalier, and Zimp Rexi. They do all the hard work. For example, Medora  sourced all the great outfits we wear. There is a lot of difficult stuff going on behind the scenes. It is not at all simple to get the animations to match the tempo of the songs, and to give the whole performance a natural feel.

Meanwhile, up above, the girls heralded the Dawning of the Age of Aquarius, and then shortly after, they welcomed Jimmi Hendrix (played by Zimp) who emerged from a purple swirl in the floor. Amazing.

The sheer variety of fashion looks, dances, scenes, and configurations kept the audience on the edge of their seats throughout the hour long show. From Respect to Dancing in the Street, we were all mesmerized by the performances.

The grand finale was 'All you need is love' with Zimp once again joining the ladies onstage. Particles reminded us all that the performance was Made with Love. I asked Medora what made her choose to be part of the Pangea Festival, and whether doing it in Opensim is the same as her usual performances in SL.

Medora Chevalier: Lampi asked us so nicely!  Putting on choreographed shows is different in open sim.  Zimp worked hard to make us a mover system, and you have to make more yourself. But the prims limit is not an issue, so that's good. We were very pleased at how many friends came together to dance and were very dedicated in rehearsals and organising their show folders. It was easier here than sometimes it can be in SL - no prima donnas!
Thirza Ember: Is this a one-off or will you do any repeat performances at the festival?
Medora Chevalier: We have nothing planned, at the moment, but I know Craft friends would like us to repeat it there, however, these things do take months. We'll take a little break... it will be summer in autumn :) a bit of sunshine and love as it gets darker.
The party continued after the end of the performance, with DJ Arianna Nightfire spinning some great tunes, and the whole audience invited to come on over to the stage and dance along. A triumphant evening for all.
Lampithaler Artist: Thank you so much for coming. It was wonderful for all of us.   We will continue with the festival at the end of August.