The Queens of the Castle

Imagine walking along a beach. Alone, or with a friend.

Beaches are nice, but they can be awfully samey, same ole trees, and sun, and sky, and sand.
That's why you often see people on beach holidays reading a book under the ombrellone.
Now imagine that, instead of bringing your own book to the beach, you could go to a beach littered with books that you could jump inside of, where you will discover action, adventure, humor, and even the meaning of life... is that too much to ask?
Not at the Nook.
The grid Nara's Nook is a one-of-a-kind place in opensim. It is a writer's colony, and a techie heaven. This literary grid is the home of writers and creators who use 3D to tell their stories. Mal Burns and I took a trip around their Story Island region, and I asked the group to explain who they are, and a little bit about their involvement in the Nook.

Nara Malone: I wanted to bring stories to life in an interactive 3D sort of world since I discovered a dusty, battered copy of the book Hamlet on the Holodeck at a thrift shop. The author, Janet Murray made a powerful argument for participatory fiction as an artform. The book was published in 1997 before there were any virtual worlds to explore. One of my first tasks upon discovering Opensim was to create something like a holodeck that could rez a scene. The second task was to create an NPC I could interact with. I showed my experiments to a circle of friends, most of them fellow members of Romance Writers of America, a few of them joined up with me in my effort to bring Murray’s vision of storytelling to life.

Dorena Bree: I was previously known virtually as Endora Twinklens. I guess I'm known for making digital art. By that, I mean photo collages and  manipulations. After joining with Nara’s Nook, I became very excited about the possibilities of storytelling by using 3d modelling.

Siobhan Muir:  The original three authors that started the Nook were Nara Malone, Tina Glasneck, and myself, though over time we also had Brandy Evans, Shara Lanel, and Marilyn Campbell.

Nara Malone: In addition to those names, we have Neothar Cortex, who is contributing tweaks and mods to make the platform we’ve built more creator and user friendly. He rescued our last hypergrid story project by writing the NPC story sequencer that gave even our most technically challenged users the ability to control NPC storylines. He is currently working on a build to demonstrate  the quality of both high and low poly projects in WebGL. Another important team member is Torn MacAlester who used to lead the Everything Writing Workshops at the Nook. He will be contributing futuristic tale in the "Storyteller’s Castle" Series.

Nara Malone: Last but far from least, Shannan Albright. She is our extraordinary character creator and costume designer as well as a long-time author. She will also be contributing a Tale to the "Storyteller’s Castle" series. Castle tales are ten scene short stories, and the involve quite a bit of work, so we’re expecting to release one of these a year.  I think most of us have known each other between 10-20 years. We all were friends before any of us had heard of a virtual world. This year marks ten years since Nara’s Nook launched.

Dorena Bree: I met Nara many years ago and she invited me to visit Nara’s Nook in 2013.  Luckily, she held my hand(figuratively) during the whole process.  After I learned that I could fly, I was hooked.

The recently refurbished grid has an interesting project, on a region called Story island. When you arrive, you see beach and ocean, a few buildings, but the thing that stands out the most are the open books, propped up in the sand. Standing in front of them you soon realize that you can enter the book, and explore a world within a world... within a world. But let the girls explain it properly. 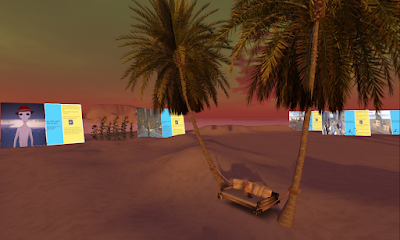 Siobhan Muir: The Story Islands are a way to introduce both Hypergrid residents and readers to the world of Unity and WebGL. We’re trying to show that you don’t have to have OpenSim experience to visit us in a virtual world. All you need is your browser and a link and a keyboard.

Dorena Bree: The Storyteller's Castle project currently has 3 or 4(perhaps more)different novellas, broken down into 10 game scenes, each revolving around the idea that our dimension crosses with another and the characters become trapped and need to solve problems. 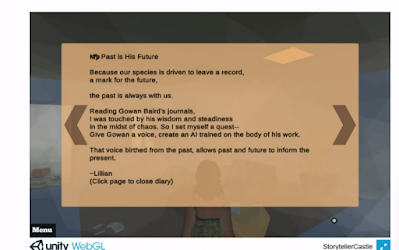 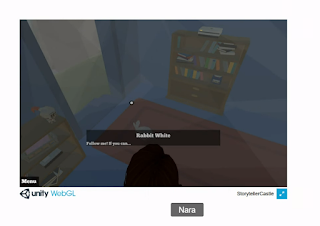 Nara Malone: To further explain what Siobhan said, it’s meant to bring our divided audiences together. Many readers find the technical complexities of Opensim overwhelming. Many of our hypergrid friends and followers find WebGL to primitive and the barriers to entrance into a new platform too intimidating. We thought if a group of romance writers could demonstrate how much WebGL technology has improved and how easy low and no-code tools make it to build these worlds, it might encourage others to give it a try. 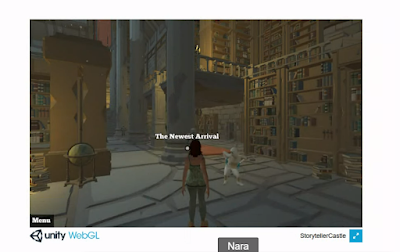 Our readers can access virtual worlds through a browser and our hypergrid friend s can access from inside opensim and hopefully they will all be intrigued enough to try both. Currently there about eight different games/demonstrations in the works. The Storytellers Castle is one of those eight and at the moment has four authors working on interactive virtual novellas for the series.
Dorena Bree: My project at the Nook is not part of the narrative, it’s a silly short story/music video game that I put together in 2017, and in 2018 made into a game for a game jam with Tyranobuilder software, just to see if I could.

Here's Dorena's book, as you first encounter it.

Chester and I clicked on it... and the story began like magic!

Jump over to Nara's Nook to experience this fascinating experiment for yourself at  world.narasnook.com:8900:Story island

Don't miss Nara and the gang on Mal Burn's TV show The Inworld Review with James Atlloud, on Sunday May 1 at 12 noon Pacific time!  https://www.youtube.com/c/MalBurnsMetaworld