Safari goes from the Foxx to the Absurdists

"In the simplest terms, Absurdism is the belief that universe is
too vast and unknowable for for human beings to ever know anything for certain.
Because of that, we do not possess the ability to say or know for certain
what, if anything, has meaning of value objectively.
This causes us to comprehend the absurd nature of our existence:
we cannot exist without meaning but we are incapable of determining meaning."
from http://the-absurdist.com

The Absurdists were Post WWII writers, like Albert Camus, who you perhaps haven't heard of, or like the book Catch 22, which you have heard of. So now you've Googled that, you'll agree that nothing really fits the hypergrid paradigm better than 'you have to be crazy to work here'. Yesterday proved we're crazy like a fox, in this case, Foxx Bode. 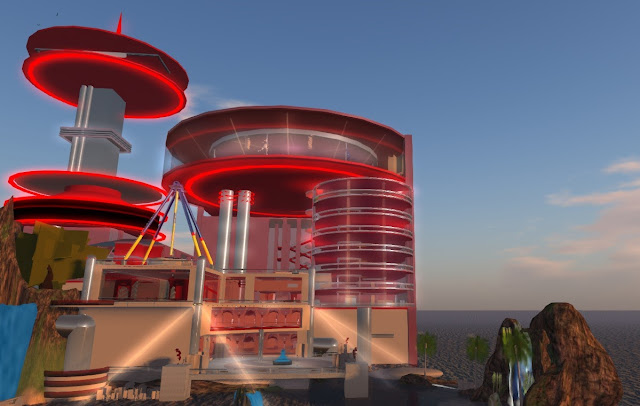 The planned destination was on Foxx's Red Dragon Club X, built when Foxx first discovered opensim back in the year dot. Sadly, this didn't work out, so we decamped to the Safari clubhouse on Teravus Plaza. But do take the time to go and see Foxx's historic OSgrid build, HG Addresses are at the bottom of this post, as usual.

Foxx Bode: looks better when all surrounding regions are booted, but i dont have the RAM to do so if i have many visitors. This is 20.000 prims here or so, main has over 50.000. Overdid it slightly :)
Thirza Ember: did you build it all yourself foxx?
Foxx Bode: yup. When I popped out of SL and in here, with no restrictions, I went all out :)  This is Version 10. Here is a video of my Version 8 https://www.youtube.com/watch?v=jmswiyPavfk
Smaragd Bailey: sehr cool
But sometimes things don't go a we hoped, and although Foxx had only one region online in a bid to make it easier for us to reach his region, in the end people were crashing or unable to reach the region.
Mal Burns: trying to TP ppl but some online not showing in friend list
George Equus: Can't reach Red Dragon, getting time out all the time, tried from  various grids, Map, whatever, same  thing - time out
Smaragd Bailey: spike have problem with tp 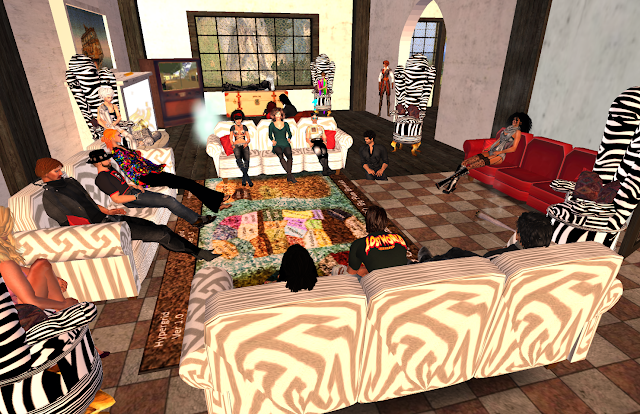 We decided to regroup at the OSGrd Safari house on Teravus Plaza, and sent IMs and TPs to everyone, leaving Red dragon to reboot. Not everyone got the message, hypergrid Ims are getting worse not better, so it took us about 30 minutes to assemble, luckily we had set aside 90 minutes to chat with Foxx. Here's some of the back-and-forth.
Xirana Oximoxi: but this is not the Red Dragon...
Lucy Afarensis: oh dam not my day
George Equus: Lucy  :)   ending up next to me you mean?
Sunbeam Magic: trying to sit on your lap George :)
George Equus: So, what happened with Red Dragon Foxx?
Foxx Bode: 155.000 prims and 4000 scripts happen :)
George Equus: Hrmmm  maybe should reduce that a bit  :)
Foxx Bode: Likely something failed in local machine, I'm sure is fine after is restarted
Thirza Ember: yeah we lost a lot of folk who got crashed
Sunbeam Magic: me too plus crashed twice ... the joys of Virtual Worlds eh ?

George Equus: Getting places from Kitely USUALLY  do  but not this time  :(
Jessie Campbell: well this is cozy
Sunbeam Magic: it is perfect 'talk' location ! Safarians rule !!
Jessie.Campbell: Foxx what do you think about the explosion of new grids...I must see 1-2 new grids per day
Foxx Bode: People love to run simulators. And local grids, and standalones give more control over privacy and inventory, so i think thats logical
Jessie Campbell: well so now there is 3 people each on 500 grids
Xirana Oximoxi: I suppose it depends on how they 'work'...if they make a lot of trouble visititng it will be not good for Opensim in general...in my view
Foxx Bode: In OSgrids history, many come here, learn how to operate regions, and eventually wander off with enough load to run their own grids, others start from pure opensimulator. Some stick here forever, like i did.
Sunbeam.Magic: Were you with OSgrid Foxx when UCI
Lucy Afarensis: I prefer here, there , everywhere... many Lucy's 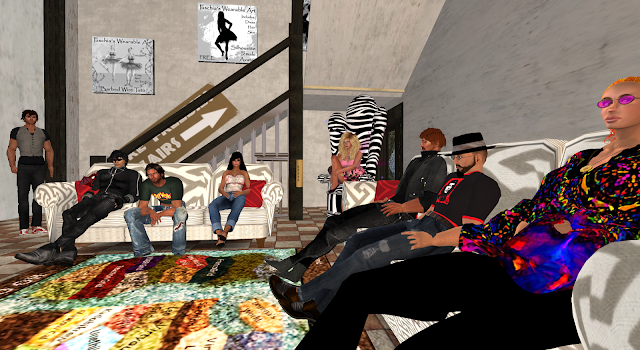 Foxx Bode: i haven't been involved in the setup of this grid whatsoever. I dropped out of SL in 2010 after 5 years. I heard of opensimulator quite fast, when it was released to something usable.  but when i logged in as a ruth with no inventory on an empty sim with no inventory whatsoever, i waited for some years. In 2010 i moved here as resident.
Jessie Campbell: Foxx I think many would consider you a bedrock of OSG.
Foxx Bode: thats just because im around since long, too much credit. i built and experimented a lot, so i ran into 1000 kinds of trouble, and like troubleshooting
Sunbeam.Magic: How many are on the Admin team now Foxx?
Foxx Bode: The admin team is Dan, Albertr, Jim, Allen, Sarah, and there's me, Paela and Avia, each do pretty specific work, stuff we like, and things needing to be done. We are all volunteers. The Board, which I am not part of, makes the management decisions, and needs to plan where the grids future is pointed towards. The admins, like myself, try to survive in today's madness and get to that point :)  There is a lot of effort being put in community events, party's, new website, SSL implementation, feedback from meetings is addressed. 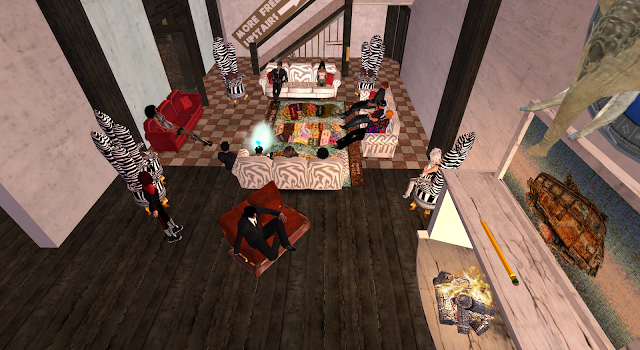 Lucy Afarensis: Foxx, speaking about the future of OSgrid, where would you like to see it go ?
Foxx Bode: and where i like to see it go for the grid, i hope it gets enough new users to fund additional or new hardware, as only that will give it a future in long run. And all that is funded by donations only.
Jessie.Campbell: maybe you could run a fundraiser every so often...or a GoFundMe
Foxx Bode: there are many idea's, and i consider that's exactly where OSGrid's next focus will be upon
Fim Fischer: In my opinion, OSGrid is the hub of all hypergrid enabled worlds. And by extending the robusto.osgrid.org part - it could become something like the metaverse ICANN.
Joe Builder: well ya i agree osgrid is a good place for the people wanting regions , But their PC isn't strong enuf for a full sized grid
Thirza Ember: ok last question, then we have to get on our way to seanchai on kitely: Foxx, if you could wave a magic wand, what is the one thing you would give OSgrid that it does not have?

Foxx Bode: 10 FTE :))
Sunbeam Magic: FTE???
Jessie Campbell whispers: ok whats that mean??
Valley Gamine: ...what's "FTE" ?
Thirza Ember: I thought he was going to say free pot
Foxx Bode: Full time Employee
Valley Gamine:  ...i'd like the be CEO  ...giggles
Jessie Campbell: no you wouldn't Val
Foxx Bode: no, we'd really could do with more developers, and more donations. For rest, this is my home, I kind of like it ;)
Arielle Delamerlibre: thank you foxx for your interesting talk

Time to head to Kitely for an event in Voice!

We met up with Caledonia Skytower, in the beautiful EXPLORESeachai region. This is our third visit to see the work that Caledonia and Shandon Loring do here on Explore. The idea of their build is to bring literature to life, in collaboration with among others, the Tacoma Little Theater. 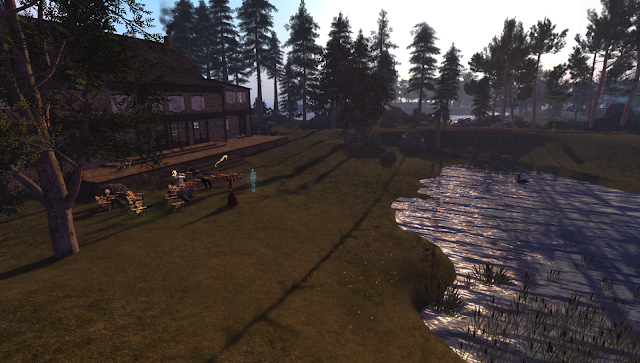 The builds help people understand more thoroughly either single books, or authors, or whole genres, the current builds are for John Steinbeck, The Great Gatsby, and 'The Absurdists' - the latter, a genre of the mid twentieth century. 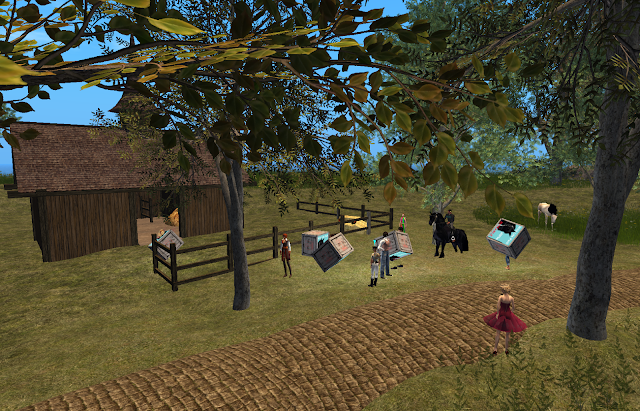 This build includes two houses, a pond, a stable and a gazebo... 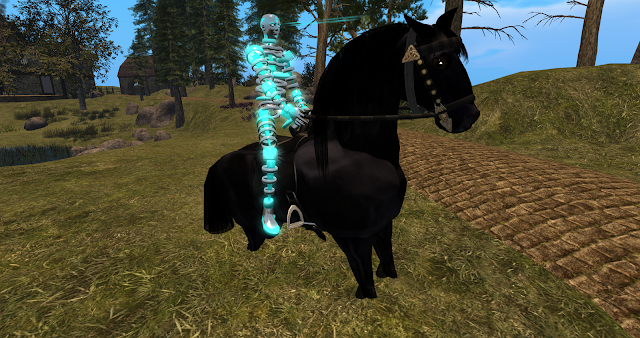 and enriched by the horse riding possibilities. 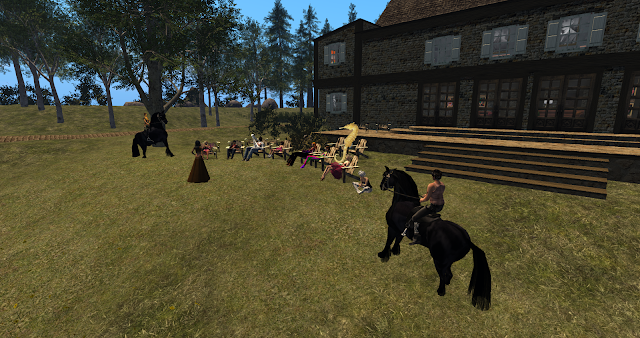 Finally, we relaxed on the lawn by the pond in some Adirondack chairs... 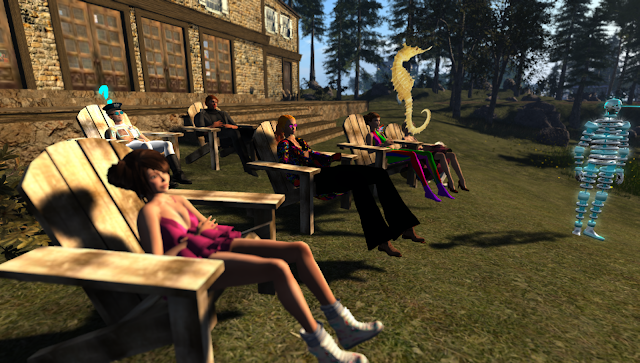 ... and listened to a second helping of Caledonia. She read some super-short Absurdist stories by (among others) Lana Zakinov...  you can see some of them here . 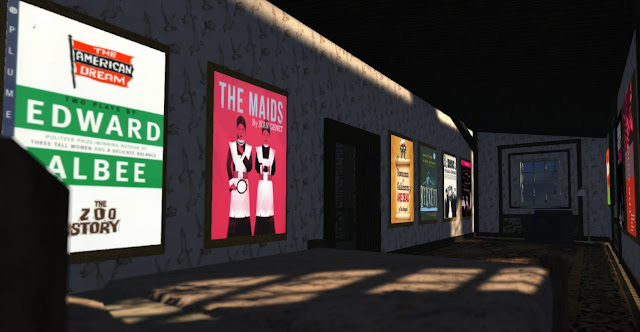 There's a lot to learn on this build. You can tour on foot or by horseback, and discover much about the writers featured inside the buildings. 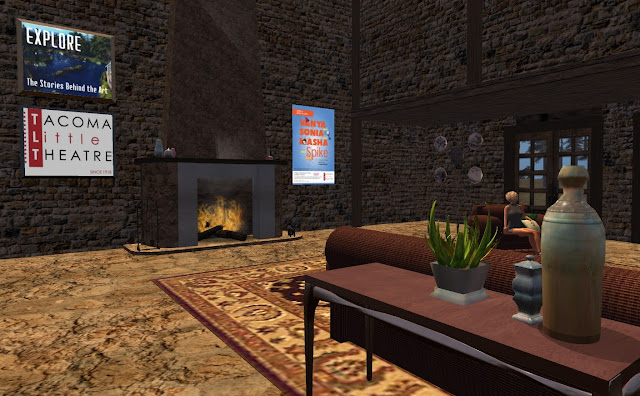 Novelists and playwrights are showcased both in portraits and in posters for books and plays, bringing a host of famous and not-so-famous names to the fore. click, find links and information that will expand your knowledge of modern literature in the most plasant surroundings imaginable! 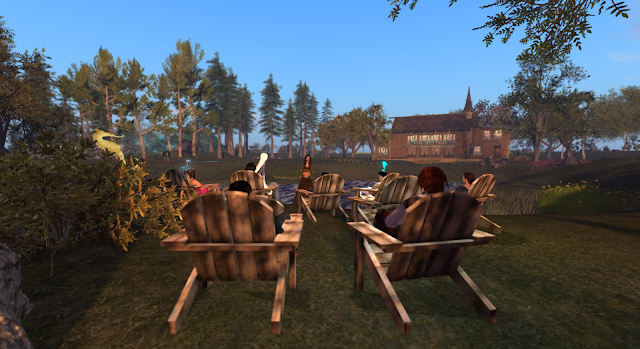 You won't be surprised to learn that 'disillusioned' Absurdist narratives continue to be written to this day. But we didn't feel the slightest bit disillusioned, after all our hg tribulations, hearing them read by an excellent narrator makes them 1000 times more intriguing and enjoyable.

Even for those who don't speak English well, listening to Caledonia's voice is a charming and relaxing and we were delighted to hear that there are some great new projects in the works, including a Macbeth build - that should be interesting!
For some time now, Seanchai has been seeking to link their SL audience to their Kitely and InWorldz audiences, via shared Local Chat (reminiscent of the old Radionne script, you may recall) but their latest plan takes that intergrid commingling  a stage further - Video link! This will allow people on closed grids to become aware of the wider virtual worlds, and who knows maybe actually take the plunge and come out exploring.
Nothing absurd about that!