This week, a little celebration to mark our one hundredth consecutive Safari. There was music, last minute panic, interesting conversation, lag, unsolicited boobage, laughs, and failed Tps. So much like any other week! 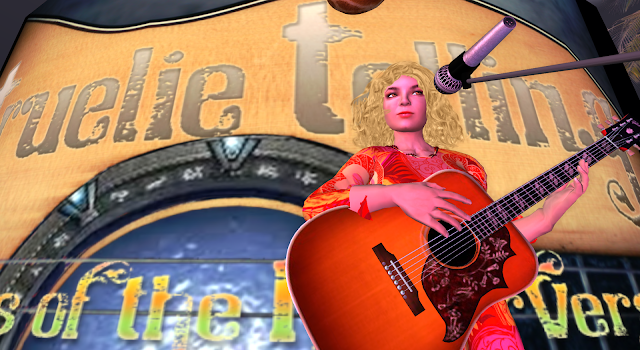 First up a Truelie Telling concert, on hgsafari sim, with the added bonus of the Guess the Grid competition, organized by Wizardoz Chrome. There are 25 images spread out around the sim, devilishly hard to find, and once found, you've got to guess what sim they are on! You will find the grid names and their hg addresses in a poster marked Guess the Grid Answers, at the Clubhouse on hgsafari sim, Francogrid. The winner on the day? Probably Sunbeam Magic got the most right answers, and Freewee Ling was the champion of finding them... she found fifteen, though confessed she couldn't identify any of the grids in the pics!! 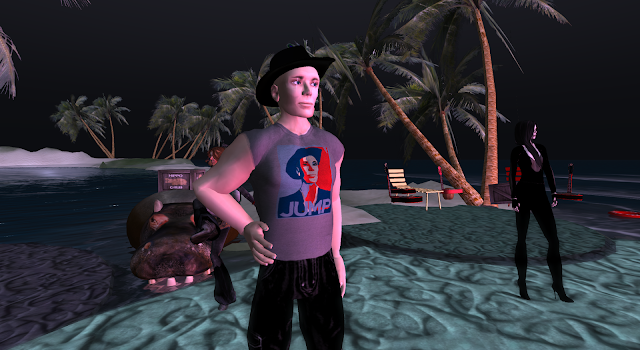 There isn't really a prize but you will find a new free tee shirt on the sim, the 'Jump' shirt worn here by Pathfinder. 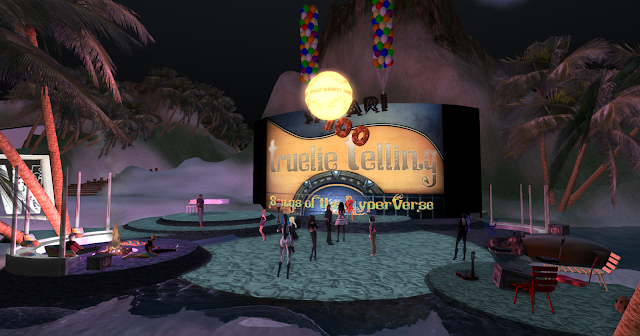 Truelie delivered a memorable collection of upbeat songs, including some of our favorites, 'Where's my hair' and 'HG Safari' both very appropriate seeing as how some of us were getting this weird wandering thing where you can only see the terrain and can't stand still... this happened to other people on other stops along the way so I guess we have to put it down to hg voodoo.
After her set, it was time to head off to Wordfromthe Wise's event. Not all of us were able to tp in, but about 20 made it over there.
There are 4 special seating places around the firework space, and you lie down to enjoy the show which involves windlight and music, as well as particles.

Word's shows are legendary and we had originally hoped to do the show on Event Plaza, to accommodate the maximum number of avies, but opensim didn't want to cooperate, despite much testing by Word and Sixtus Majus- next time they will figure out a way to make it accessible to a bigger crowd, I am sure. After the main show which lasts about 30 minutes, we moved on to the nearby dance floor where the light effects continued.

The sim didn't crash, but many - including, believe it or not, Word himself - couldn't see the particles! But the great James Atlloud had the brilliant idea of livestreaming his screenshot... so those who couldn't get in could watch with us, or watch again later. See the full video here.

Finally we went to meet up with Foxx Bode over on OSGrid.
Thirza.Ember: Foxx, how long have you been in open sim why did you join osgrid?
Foxx Bode: 6 years actively.  Dropout from SL. I missed building.
Snakedance Moonwing: i joined cause i heard there was free land, as much as you wanted lol
Nee.Lemon: the first thing that happened to me here was a great guy who gave me 2 days after a sim to use for free, he is no longer here but I will never forget,
Sunbeam.Magic: 7 years for me too Nee... left SL after almost 5 years there when I heard 15K prims per region lol

Nee.Lemon: here I decided to do everything full perms on the same spirit I was loving already in SL before from Arcadia.
Sunbeam.Magic: same with AAcme and I, but we had already started that full perm in SL due to Arcadia's influence
Foxx Bode: There are many wonderful and extremely talented individuals in the metaverse 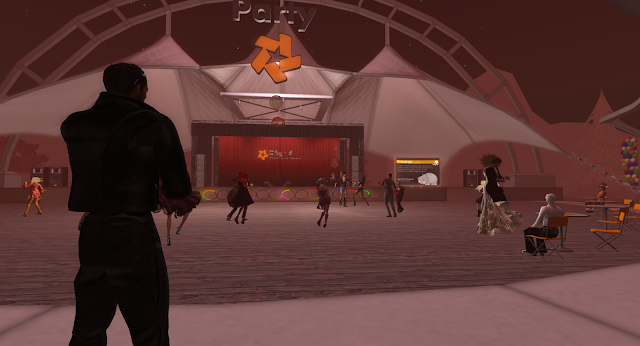 Praline.B: happy happy happy 100th! ;)
Foxx Bode: Thats impressive. Takes devotion to keep projects running over such timespans.
Thirza.Ember: ok question for all of you... what is the BEST thing about hypergridding? and the worst thing?
Sunbeam.Magic: The best is the choices ! There is nothing worse ... lol... IT"S all MAGICAL !!!!!!!!!
James.Atlloud: Hypergridding is future now.
Praline.B: Sure, I always feel that the major thing in Opensim, this opening to this huge metaverse with hypergriding, How lucky we are! ;)
Truelie Telling: learning has never been so much fun
Pathfinder.Lester: best thing: when I explore a new place and find little details that I know someone spent a lot of time and thought to create.  worst thing: when I forget to landmark the place and can't find my way back :/
Lucy Afarensis: worst thing: safari is coming the next day and 2/3 of my sim is gone
Thirza.Ember: the worst for me is TP limbo... can't log out, can't move, just stuck nowhere
Mal.Burns: yep - limbo is a pain
James.Atlloud: What I like is that we can all be part of OpenSim and hopefully no single entity can take it away.
Sunbeam.Magic: It like being able to Time Travel ... when I'm in Japan its a day and 1/2 a head of my time ;) 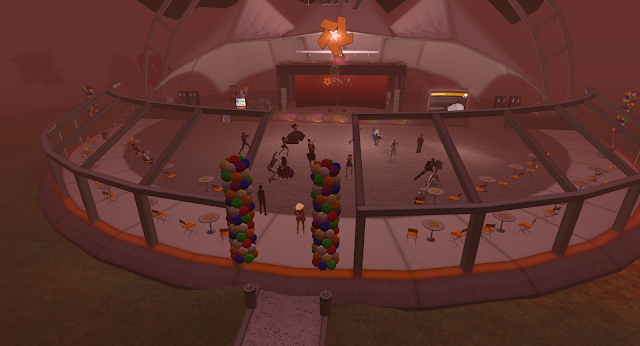 Thirza.Ember: OK, another question... if you were magic and could make 1 big change to Opensim, what change would you make, and why?
Truelie Telling: well, Thirza, I'd like objects/screens, etc. to be able to play my recorded songs and videos
Mal.Burns: harmony and total co-operation between the devs (plus serious co-ordination)
James.Atlloud: For Opensim - I'd like a supporting organization that can recognize/thank the devs.
Sunbeam.Magic: If I were truly Magic... I'd make everyone positive thinkers and have no negitive vibes in our worldz :)
Truelie Telling: I'd like a central avatar registry/post office so my avatars can share with each other and we can communicate more effectively across grids
Wizard Gynoid: Safarionne
Pathfinder.Lester: one magic change....I'd rez a  hugepile of RL $ and use it to actively fund opensim development, keeping it all open source, and funding specific changes that were most requested/needed
Foxx Bode: Working metaverse wide map / search / eventlist would be cool
George Equus: Decent tera forming would be great
Pathfinder.Lester: 1 feature I would want to have: create a simple way for people to set up and run their OWN grids on their own desktop computers or whatever.   It's too complicated right now.
Mal.Burns: mind controlled interface will suffice i guess
Truelie Telling: a good web-based browser-viewer would open the whole world up, imho, and an app viewer for pads and phones
Lucy Afarensis: I would like a builder's viewer that would be a mash up of blender and an osviewer

... and much more chat about the future, about the pros and cons of having virtual money, about how being on the hypergrid means you're not  citizen of one world, but a cosmopolitan. Funny, polite, interesting views.
Just like all the safaris. You show up for the trip, but you stay for the people. Next week is Portuguese week, join us if you can.
HG Addresses
HG Safari sim   hg.francogrid.org:80:hgsafari
Word's fireworks sim  hypergrid.org:8002:fireworxxs
Event Plaza home to the Friday Party   hg.osgrid.org:80:event plaza
Posted by Thirza Ember at 3:10 PM